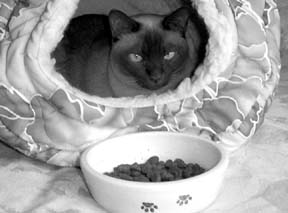 Although you might think its not the end of the world if your obese cat avoids the food bowl for a few days, the truth is that this diet can prove to be fatal. When a cat stops eating – particularly if shes overweight – it can trigger a dangerous condition called hepatic lipidosis, also known as feline fatty liver syndrome.

But if its left untreated, most cats (more than 90 percent) with hepatic lipidosis will die, says Dr. Goldstein. However, with aggressive nutritional treatment – which includes tube feeding – about 80 percent of cats diagnosed with hepatic lipidosis may survive, depending on what underlying disease there is and why they stopped eating in the first place.

When cats develop this condition without an obvious underlying disease or cause, its termed idiopathic. The majority of cats that develop idiopathic hepatic lipidosis are overweight and many are indoor, middle-aged or older cats.

Why Its So Dangerous
When a cat wont eat, the animal must use its stored body fat and protein for energy, breaking down its own tissues and releasing fat into the blood. The liver – acting as the bodys filter – collects the fat. Clogged with fat, the liver can no longer function well and can trigger jaundice (yellow discoloration), neurological and bleeding disorders, electrolyte disturbances (such as imbalances in sodium and potassium, which help cells to maintain voltages and generate electrical impulses), vitamin depletions, and eventually, liver failure and death.

A trip to the veterinarians office is usually made when an owner discovers the cat has stopped eating, has lost 25 to 50 percent of its usual weight or has started to vomit. Blood tests and ultrasound examinations are used to determine whats causing the appetite loss and to assess liver status.

An Effective Treatment
The veterinarian will first rehydrate the cat, normalize her electrolytes, and then provide calories by feeding a liquefied diet. Placing a tube through a nostril to the esophagus can provide adequate nutrition in the short term, according to Dr. Goldstein. Once the cats electrolytes are normal and the dehydration is corrected, we become more aggressive in feeding the cat, either using an esophagostomy tube to deliver food into the esophagus from a neck opening or gastrostomy tube, which delivers food directly to the stomach from an opening in the abdominal wall.

Typically, the veterinarian will feed a high-protein, high-calorie diet many times a day and may supplement the diet with vitamins B1, B12 and E. Medications may be prescribed to help control vomiting, diarrhea and other problems caused by the underlying disease that triggered the anorexia.

The sooner the cat is treated, the better. Many cats will recover in several weeks, but some may need to be tube fed for several months before they will eat on their own normally, says Dr. Goldstein, who notes that many cats can go home once they are stable. With minimal training, almost all caretakers are comfortable using the feeding tube. After several weeks – but sometimes up to 20 weeks – of tube feeding, the cat will, hopefully, start eating on his own. When she does, it becomes quite likely that the cat will recover.

Keeping a cat trim is one way to prevent lipidosis. If your cat is obese, talk to the veterinarian about putting it on a diet and watch for any lack of appetite, especially during stressful periods. Cats that stop eating, even for a day or two, should be taken to a veterinarian.