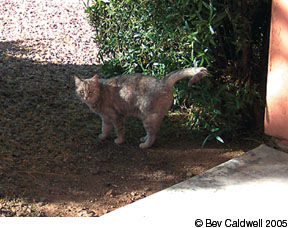 If your cat is an unneutered male who likes to spend his time outdoors brawling with other cats (and you, the owner, do nothing to discourage this behavior), your animal is at especially high risk for infection with the feline immunodeficiency virus (FIV). This submicroscopic organism can weaken the animals immune system and, in time, make him vulnerable to a host of opportunistic diseases.

This pernicious virus thrives mainly, though not exclusively, in a cats saliva, and deep bite wounds are the primary mode of its transmission from an infected to an uninfected animal, according to James Richards, DVM, director of Cornell Universitys Feline Health Center. Feisty, free-roaming outdoor males are far more likely than other felines to pick up the virus, because they are far more likely to be bitten by other cats.

It has been estimated that at least three-quarters of all cats in the U.S., feral and otherwise, that are diagnosed with FIV are males. So transmission of the virus, says Dr. Richards, is mainly a lifestyle thing and a guy thing.

Stealthy Invaders
Virologists classify FIV as a lentivirus, a slow-acting organism in the same viral family as the potentially deadly human immunodeficiency virus (HIV). But since these viruses are species-specific, a cat cannot contract HIV from a human, and a human cannot be infected by FIV.

Also like HIV, and like feline leukemia virus (FeLV), the FIV organism is also classified as a retrovirus – a type of virus that transports its genetic blueprint from one host to another in the form of RNA. Once the virus has entered a cell, reverse transcriptase – an enzyme contained within the virus – converts the viral RNA into DNA. In that form, the virus is able to insert itself into the DNA sequence of the host cell.

In effect, says Dr. Richards, you have a situation in which a cats cells are doing what the virus wants them to do instead of what they would normally do.

Particularly vulnerable to infection are cells that play key roles in an animals immune system, such as lymphocytes, macrophages and certain cells in the central nervous system.

Grim Consequences
The earliest stage of infection is likely to pass unnoticed by the cats owner. The animal may run a fever as its white blood cell count decreases, and its lymph nodes may swell. But these are subtle occurrences that the owner will probably not perceive. After these early signs of infection, says Dr. Richards, an FIV-positive cat is apt to appear normal for many years.

Eventually, however, evidence of the animals compromised immune system will start emerging as  bacteria, viruses and fungi that previously existed harmlessly in its normal environment begin to cause illness.

Some infected cats experience recurrent illness interspersed with periods of relatively good health. In most cats, however, susceptibility to opportunistic diseases increases progressively as the animals immune system is repeatedly challenged by successive episodes of illness.

The length of time before secondary infections appear in an FIV-infected cat is extremely variable, says Dr. Richards. Ive seen animals succumb within a few years after diagnosis. On the other hand, Ive also seen cats that have been asymptomatic for years live perfectly happy, healthy lives until they die from some completely unrelated cause.

Modes of Transmission
Adult cats are more frequently infected than are young cats. The infection is quite rare in kittens simply because they dont engage in high-risk behavior -the fighting and biting – until theyre older.

Although sexual contact is a common mode of transmission in HIV, that seldom holds true for FIV, despite the viruss presence in feline semen and other genital secretions. This is probably because a cats immune system is somehow better able to ward off the virus when it is sexually transmitted than when it is transmitted by biting.

Likewise, while it is known that HIV can be transmitted from an infected human mother to her offspring, this is uncommon in cats. For one reason, an infected mother cats milk contains antibodies to FIV – protein substances that the body produces to weaken or destroy the virus. These antibodies are passed along to a kitten during feeding and are believed to combat the organisms invasion.

Although unneutered, free-roaming male cats are at markedly higher risk of infection, Dr. Richards points out that females are also vulnerable, that cats that do not habitually fight can be infected and that indoor cats are also at risk – especially those living in the same household as a cat that is fond of roaming the neighborhood.

No one breed is at greater risk of infection than any other, although pedigreed cats may be less vulnerable due to the low-exposure conditions of their environment, their owners control of their behavior, and the tendency among breeders of fancy cats to adopt rigorous FIV testing procedures for their valuable animals.

At the same time, Dr. Richards notes that even a meticulously pampered pedigreed cat is subject to infection if bitten by a hostile FIV-carrying rival.

Coping with FIV
Is there a way to get the virus out of an afflicted cats system? Sadly, no, says Dr. Richards. Once a cat is infected, its infected for life. He notes that attempts to treat FIV-infected cats with anti-retroviral drugs – such as zidovudine – that have been enormously helpful in treating HIV-infected men and women have rarely shown much benefit.

Diagnosis of infection is based on a cats history, clinical signs and the results of a blood test for FIV antibodies – a test that Dr. Richards strongly recommends for all cats at least once in their lifetimes. Cats in a high-risk group or those in a multiple-cat household in which there is an FIV-positive cat or a cat with unknown FIV status should be tested every year.

Some people wait for a cat to get sick before having it tested, he says. I would like every cat to be tested for the virus.

Although a vaccine designed to prevent FIV infection was released in 2002, Dr. Richards calls it controversial because the vaccine stimulates the production of FIV antibodies in the blood – the same antibodies that are produced in an infected cat. Therefore, a vaccinated cat will test positive whether or not the animal is actually infected.

Dr. Richards advises: Because of this testing confusion, along with questions about the vaccines effectiveness in the real world, an owner should discuss with a veterinarian whether vaccination would be beneficial even if the animal is one that likes to go outside and get into fights.

The question of vaccination aside, Dr. Richards stresses the need for all cats to be tested for FIV infection.