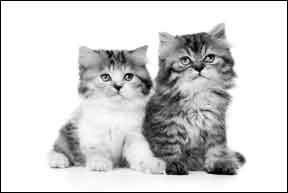 Fortunately for cats, parasitic mites are more likely to feast on dogs, but felines aren’t home free. Affected cats can appear moth-eaten, missing patches of fur on the head, neck and ears, but mange is more than unsightly. “An itchy cat feels miserable,” says dermatologist William H. Miller, VMD, Medical Director of Cornell University Hospital for Animals. “Itchy cats often get grumpy and hide frequently, lose their appetites, and sleep a lot when they aren’t itching.” What’s more, mites can cause skin conditions ranging from dandruff to infected sores.

Affected Regions. Take Demodex gatoi — please! The skin condition, which mimics other pruritic, or itching, disorders in cats, primarily occurs in the Southern and Gulf Coast regions, as does feline scabies. Unlike other types of demodex mites, which are rarely contagious, D. gatoi is contagious among cats.
Cheyletiella, scabies and ear mites are also contagious. They spread through contact with an infected animal, bedding or environment. “Most mites die off in the environment within 24 hours, but they can survive longer in dens and bedding,” Dr. Miller says.

Some mites can also move from dogs to cats. In addition to feline scabies (also known as head mange), cats can contract dog scabies, which causes the same signs as feline scabies: severe itching on the head and neck, hair loss, and red, raw or scabby skin.

Declining Frequency. Cheyletiella, another mite found in both cats and dogs, can be transmitted between these species. The good news is that it’s easily kept under control with products that kill fleas and ticks, so the frequency of the disease has recently decreased. Cats on a sound preventive program with a product that kills fleas and ticks shouldn’t have issues with Cheyletiella.

Demodex cati, a normal resident of feline skin, usually causes a problem when it over-populates. It, too, causes itching, hair loss and miliary dermatitis, characterized by tiny bumps on the skin. The difference between it and Demodex gatoi is that D. cati is typically associated with an underlying disease such as feline leukemia virus or other diseases that cause immune suppression.

The mites that most commonly affect cats are Otodectes. Because they’re spread by contact, they’re most often seen in kittens. Cats with ear mites have a dark-brown discharge that fills the ear canal. They often scratch their ears to relieve the itching, which may range from mild to severe. The mites can also live and feed outside the ear, causing signs elsewhere on the body.

Suspect Cheyletiella if your cat scratches or has dandruff along his spine. The mites tend to feed along the length of the back, resulting in dandruff.

Cats with D. gatoi, D. cati or scabies will scratch, lick or bite until the fur comes off in patches. Signs of D. cati may be limited to the head, neck and ears, a condition known as localized demodicosis. Scabies shows up on the face or front feet.

Complicating Factors. In severe cases of mite infestation, the itching is so intense that cats can’t get any relief. They may lose weight from constant scratching or biting at the skin, or develop painful, crusty sores from self-inflicted wounds. Bacterial infections of these sores can be a complicating factor.

It’s a good thing demodectic mange is rare in cats because convenient treatments are not yet available. Medicated shampoos and dips can help but take up to a year to be effective. Treatment for most other mites is easy and quick, Dr. Miller says. Dips, drops or topical treatments kill the mites. After taking a skin scraping and examining it microscopically to identify the type of mite, the veterinarian will choose the appropriate treatment based on the mite’s species, your cat’s age and any other health issues he may have. In most cases, the problem resolves within a month.