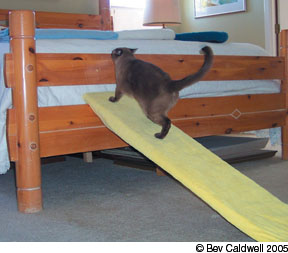 Millions of elderly Americans suffer from one form or another of arthritis – a painful, frequently debilitating and potentially crippling disease of the joints. The same holds true for older cats.

In a recent study, researchers carefully analyzed X-rays of the spines and limbs of 100 middle-aged or elderly cats (10 years of age or older). They found that very few of the animals had perfectly normal joints and that most of them had clearly discernible radiographic signs of arthritis.

Indeed, says Alice Wolf, DVM, a professor of small animal medicine at Texas A&M Universitys College of Veterinary Medicine, the X-rays revealed that 90 percent of cats over age 12 had some type of arthritis.

This does not mean, however, that older cats are uniquely at risk for the condition, which develops gradually over time. Another study, based on post-mortem examination of shelter cats, indicated that one out of five cats one year of age and older, despite their relative youth, are probably arthritic to some degree.

In any case, the condition is chronic and incurable. Once a cat is diagnosed with arthritis, the disease is usually manageable by means of medical therapy or surgery, but once present, it will never resolve itself.

Precipitating Influences
Arthritis comes in many forms and can be precipitated by a variety of factors, says Dr. Wolf. These factors include: genetically acquired predisposition; congenital malformation; physical trauma; immune system disorder; infectious disease; and, most commonly, the constant wear and tear that the joints experience during the course of a typically active cats daily life.

While the sources of the condition vary, however, they all eventually lead to inflammation within the joints, changes in their anatomical makeup, and an inevitable decline in the functionality of the associated bones, muscles, tendons and ligaments.

Typical Signs
No matter what has caused the condition, the signs of arthritis are similar. For example, says Dr. Wolf, a normally agile and athletic cat will become increasingly reluctant to leap up onto a sofa or windowsill or to scamper up and down stairs. The cat will become quieter and more sedentary, she notes, and will tend to spend more of its time in one location.

A severely arthritic cat will also indicate that it is in pain when its lower back or limbs are touched. Due to persistent discomfort, some animals will become less fastidious when it comes to cleaning themselves thoroughly. Or they may start having accidents outside the litter box because they cant lift themselves over the edge of the pan.

On the other hand, some affected cats, no matter how much pain they are experiencing, may skillfully conceal their discomfort. Due to a deeply ingrained instinct for self-protection, they will avoid signaling to potential predators that they are in any way disabled. Unfortunately, a severely arthritic cat is apt to develop marked lameness that will be impossible to conceal.

In many instances, a routine veterinary checkup may reveal that a cat is suffering from early-stage, if not advanced, arthritis – and the earlier that the condition is diagnosed, the better are the chances that its resultant pain and disability can be dramatically alleviated.

Most Frequently Observed
The most common form of feline arthritis, says Dr. Wolf, is osteoarthritis, otherwise known as degenerative joint disease. She estimates that nine out of 10 cats showing signs of arthritis will eventually be diagnosed with this specific condition.

Feline osteoarthritis is characterized by the erosion of cartilage, the smooth tissue that protects the ends of bones from rubbing directly against one another within a movable joint. When this protective tissue, for whatever reason, is worn or torn away completely, the bone ends come immediately into contact, and the persistent grinding of bone against bone results in inflammation and pain.

All joints in a cats body can be affected by osteoarthritis, but those that become most visibly apparent to the owner will be the movable joints, most often the shoulders and elbows. But the knees (stifles), the wrists (carpi), and the hips are also frequently affected. The outward signs will vary, depending on which joints are most painful, the extent of damage and the animals age. An altered gait may eventually occur as the disease progresses or if the joint disorder has resulted from an injury. Also, limbs that are not being exercised normally may start losing muscle mass and become noticeably thinner.

Although osteoarthritis most commonly results from the constant grinding of bone ends over a long lifetime, Dr. Wolf points out that the condition can also emerge in younger cats as the result of hip dysplasia, a genetically acquired malformation in which the ball-and-socket joint connecting the top end of the thigh bone and the cavity in the hip into which it is supposed to fit are improperly aligned.  As a result, the bones in the joint knock and grind against each other, which can eventually lead to the wear and tear characteristic of osteoarthritis.

This condition can also stem from harsh physical injury – a bad fall, for instance – that damages the joints.

Among other forms of feline arthritis – all of which occur far less frequently than does osteoarthritis – a condition called chronic progressive polyarthritis is most notable. This erosive joint disease is similar to rheumatoid arthritis, a human disorder caused by an immune system quirk, in which cells that are meant to protect the body instead assault a persons system. In cats, the condition is associated with feline leukemia virus (FeLV) infection. The result is an inflammatory response that leads to destructive arthritic lesions.

Feline arthritis can also be caused, directly or indirectly, by reactions to wounds and other viral or bacterial infections, says Dr. Wolf.

But the vast majority, she notes, are caused either by normal wear and tear on the joints rather than by immune-mediated responses or infectious processes.

Risk Factors
There is no gender predisposition for feline arthritis; males and females are similarly susceptible. And no single breed is more vulnerable than others. Overall, advanced age is by far the greatest risk factor, according to Dr. Wolf.

Also of significance, however, is an animals weight, since fat cats are constantly exerting excessive pressure on their vulnerable load-bearing joints – their hips and leg joints. Obesity is a real problem among cats, she says, second only to age as a risk factor. (This is especially problematic, she notes, because recent estimates suggest that between 30 percent and 35 percent of cats living in U.S. households are obese.)
Regarding lifestyle as a risk factor, she notes that outdoor cats may be at greater risk for arthritis than indoor cats because of their increased exposure to infectious agents and to injury, like being hit by a car, for example. At the same time, indoor cats may be at elevated risk because theyre more sedentary and underexercised and because theyre more likely to be overfed by their owners.

Potential Relief
Veterinary diagnosis of a cat that seems to be experiencing arthritic pain focuses on excluding other disease conditions and, insofar as possible, definitively confirming the presence of osteoarthritis or other types of  joint disease. This will entail a complete medical history and overall physical examination of the affected animal. Well feel the joints very carefully, says Dr. Wolf, and put them through a complete range-of-motion test to see if there is any evidence of swelling, heat and pain.

If the signs of arthritis are present, she says, the physical exam will be followed by X-rays, which will tell us a lot about whats going on in the joints. If arthritis is diagnosed, the veterinarian may recommend the use of an advanced imaging technique – a CT scan or MRI – to assess whether the condition may be amenable to arthroscopic surgery, joint replacement or bone fusion.

Treatment for osteoarthritis, she says, usually entails medicinal therapy, most often starting with a nutraceutical such as Cosequin or glucosamine. If these agents fail to relieve the animals pain, further options include the use of antiinflammatory drugs and narcotics as needed.