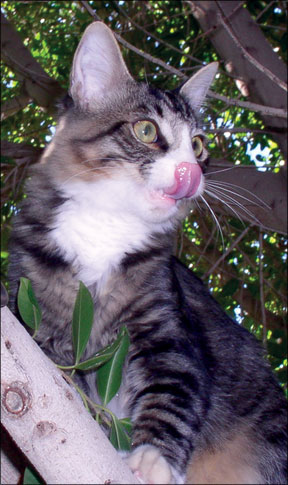 Dear Elizabeth: My cat, Nickel, meowed at the door to be let in this afternoon, as she always does after her outdoor adventures. Today was different, though, because when I went to the door to let her in she was sitting next to a dead crow. I dont know if she killed the crow, or if she found it dead and brought it for me to admire. Regardless, my first thought was of West Nile Virus. Can you tell me if cats can catch West Nile Virus from crows (dead or alive)? If they can catch the virus, are they able to pass it to humans?

Thanks for your good questions! As a former expert on self-sufficiency (read: stray cat), and a current student of feline health (read: FHC office cat) I feel well-qualified to address your concerns.

First let me tell you a bit about West Nile Virus (WNV). WNV has been recognized as an infection of birds since the 1930s.

Transmission is known to occur bird to bird via mosquito bites, explaining its seasonal occurrence: Most cases in birds are seen during summer and fall, when those pesky mosquitoes are most numerous. Historically, WNV has stayed within the bird-mosquito-bird cycle as a low level problem within the bird population. From birds, there is typically only occasional spread to horses and humans.

This pattern changed dramatically in the United States epidemic of 1999-2002. Unlike previous flare-ups in other parts of the world, this outbreak was marked by significant bird mortality of many avian species, with deaths reported in over 150 bird species. Mortality in corvids (crows and blue jays) was especially high. With the high number of infected birds, its no surprise that significant spillover to horses and people occurred. In the years 1999 to 2003, there were nearly 15,000 human cases of WNV in the U.S. and even greater numbers of equine cases. The surprise was that in addition to cases in birds, humans and horses, WNV disease was documented in several other species, including squirrels, two dogs, an alpaca, a wolf, two sheep and several hundred alligators on an alligator farm.

Certainly, most transmission of WNV from infected birds during the U.S. epidemic was accomplished by mosquitoes. Incidence of disease peaked each year during the height of mosquito season. However, new modes of transmission were observed. Although not proven, it is thought that the farmed alligators were infected by eating viral-positive horse meat. A few cases of accidental transmission to laboratory personnel occurred while working with infected bird carcasses. Most significant for our conversation is the fact that oral transmission was documented experimentally in cats.

Now its time I stop showing off what Ive learned by eavesdropping at the FHC, and by lounging on open text books! Lets talk about Nickel!

Your first question is whether she could acquire WNV from an infected bird. Although naturally occurring illness due to WNV appears to be very rare, cats have been found to be positive for viral infection on surveillance testing. In addition, as in my lecture above, we know from experiments that cats can be infected both by mosquito bites and by eating infected tissue. So, yes, if the crow that Nickel brought to your door was infected with West Nile Virus, Nickel could have been infected by her oral exposure to the carcass. But dont worry – even if she was infected by catching (or at least carrying) an infected bird, it is extremely unlikely that she would actually get sick from the infection. Cats infected by mouth all remained healthy.

Your second question is easy: There is no evidence that an infected cat can be a source of virus for any other animal (or person!) either directly, or via mosquito bites.

I hope that Ive answered your questions about cats and West Nile Virus. Give my regards to Nickel, and pass on my advice that next time she wants to present you with a gift, she catches a catnip mouse instead!