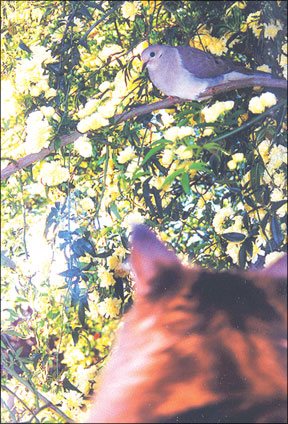 Recently I learned about a disease that cats can get from eating birds, songbird fever. Our tabby cat, Bruiser, is a fearsome hunter, with birds being his specialty. Now Im concerned that hell get sick from eating his favorite snack food. I dont like him eating birds, but I havent had much luck convincing him to pursue another hobby. Do you have any information on this disease and any tips on how I can foil Bruisers success at bird catching?

Hmm, if I had known about this disease during my days on the farm, I might not have been so keen on eating birds myself! Songbird fever is an uncommon disease of cats, that results from eating Salmonella-infected birds or from spending time in bird feeding areas (and ingesting contaminated bird feces). Symptoms of songbird fever appear suddenly two to four days after exposure, last two to seven days, and include high fever, anorexia, depression, diarrhea (which may contain blood) and vomiting. The diagnosis can be confirmed by bacterial culture of the feces or blood. Songbird fever is fatal in up to 10 percent of cases.

electrolyte imbalances that accompany vomiting and diarrhea. You should feed a bland diet once the vomiting is under control, isolate the cat to prevent transmission to other cats and allow time for the body to fight the bacteria.

Antibiotics are reserved for treating systemically ill cats – not those showing only gastrointestinal signs – since antibiotics may prolong bacterial shedding and promote antibiotic resistance. People at high risk for contracting salmonellosis should avoid contact with Salmonella-infected cats until bacterial cultures indicate the cat is no longer shedding bacteria, and careful attention to hygiene should be followed by anyone having contact with the infected cat.

Salmonella bacteria live in the gastrointestinal tract of many animals, are shed in the feces and saliva, are ubiquitous in the environment and are responsible for over a million cases of salmonellosis in humans each year.

By far, most cases in humans result from eating undercooked meats, or foods contaminated with feces from Salmonella-infected animals or other humans (yuck!), but its important to note that salmonellosis can be transmitted from animals to humans and vice versa. People at greatest risk include the elderly, the very young and those suffering from immunosuppressive diseases or receiving immunosuppressive medications.

Cats are fairly resistant to Salmonella-induced diseases, and most of the time are unaffected by the bacteria. Some cats will become asymptomatic carriers following exposure to the bacteria, meaning the cats appear healthy but can still shed the organism and may even contaminate their fur during grooming. This is why its important to always use good hygiene, washing hands after handling any animal and his or her toys, litterbox, bedding and food and before eating or handling food.

As is the case with people, cats that are in poor health or are infected with immunosuppressive viruses like FeLV or FIV, kittens or elderly cats, or those living under stressful conditions (cats in hospitals or living in large groups), as well as cats being treated with antibiotics, are at greater risk of becoming ill following exposure to the bacteria. Salmonella infections can follow ingestion of contaminated foods, especially raw meats or pet foods contaminated during processing, and may result in gastrointestinal disease or more serious illness if the bacteria enter the bloodstream or affect different organs in the body.

By convincing Bruiser to remain indoors, you could protect him from songbird fever and many additional hazards that outdoor cats face (including car accidents, parasites, deadly viral infections and poisons). Indoor cats live longer and healthier lives than outdoor cats, with cats allowed outdoors living an average of three to five years and indoor-only cats living an average of 12 years. Im living proof that even formerly feral cats can happily adjust to the posh life of an indoor cat. For more information, you can read the pamphlet, How to Make Your Outdoor Cat a Happy Indoor Cat, at http://www.abcbirds.org/abcprograms/policy/cats/materials/outin.pdf

The birds would certainly appreciate having one less hunter in your neighborhood! Many types of songbirds are becoming endangered, with scientists estimating that cats kill hundreds of millions of birds each year. Im embarrassed to say that I have contributed to that number, but now I am a bird watcher – not a hunter – and spend hours observing birds at a window feeder which my friends at the Feline Health Center installed for me. Why not try a similar source of entertainment for Bruiser as you try to convince him to give up the wild outdoors? Love, Elizabeth