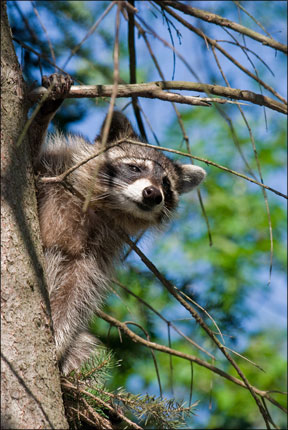 Dear Elizabeth, I read in the news about rabies spreading like wildfire through Arizona. Is this due to a new virus? How dangerous is it? How is it spread? I live in Ohio, but do I need to take extra steps to keep my cat safe?

Thanks for your good questions. Im happy to share what Ive learned from my pals at the FHC and to tell you that the short story is: Dont panic!

Rabies is in the family of RNA viruses (Rhabdoviridae) and the genus, Lyssavirus. Rabies exists nearly everywhere although some areas (including New Zealand; parts of the Caribbean, Scandinavia, and British Isles; Japan; and Hawaii) are thought to be free of the virus.

In the United States, as in most of the Northern Hemisphere, rabies is a disease of wildlife which

occasionally spills over to infect domestic animals and humans. Infection of our pet cats and dogs occurs when unvaccinated animals come into contact with infected wild animals; vaccination provides an important protection to our pets and makes an effective barrier between wildlife rabies and humans.

All warm-blooded animals are susceptible to rabies; however, the virus in a particular geographic area is usually a distinct genetic variant that has adapted to preferentially infect a single dominant reservoir host. Thats why youll hear about so-called raccoon rabies in the Eastern US, and skunk rabies on the West coast. The reservoir host species is endemically infected, meaning that infection always exists in the population at some frequency. Infection in the reservoir host population tends to have a cyclic pattern, with numbers of animals infected waxing and waning over time.

Spill-over to other species from the reservoir host population tends to be sporadic. Infection depends on contact between the primary host species and a susceptible animal. Once infection passes from the primary host into another species, it tends to be a dead-end; this means that the newly infected animal is unlikely to be a source of sustained virus spread to other members of its species. For example, if a rabid raccoon on the East coast (infected with the raccoon variant rabies virus) bites a fox, the virus remains a raccoon variant and does not change to preferentially infect foxes. Raccoon variant rabies will tend to quickly die out in the fox population.

The situation in Arizona is unique. The bat variant rabies virus that first showed up in infected skunks in 2001 has evolved rapidly to allow maintenance of the infection within the skunk fox populations. For the first time, a genetic variant of rabies virus has been able to cross over and adapt to a new reservoir host species.

This is stunning news for virologists, molecular biologists and epidemiologists, but what does it mean for veterinarians, pet owners and their humans? Not much! In fact, the new variant is no more contagious, no more virulent and no more dangerous to pets and humans than any other rabies variant. Spread of the new variant depends on contact with infected saliva, just as for any rabies virus. What is noteworthy about this new strain is its relatively rapid evolution to become endemic in new host species. Our advice to cat owners is clear and unchanged:

(1) Be certain to keep your cats rabies vaccination up to date – no matter where you live!

(2) If you live in a rabies-endemic area that is experiencing a high number of cases in the wildlife population, consider keeping your cat indoors.

(3) As always, be mindful of wildlife that is acting abnormally.

I hope that this helps clear up your questions. Love, Elizabeth