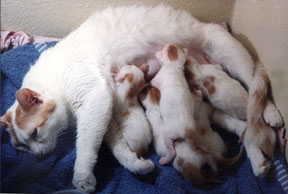 Your cat can get into a lot of trouble – and a lot of trouble can get into it – if it insists on digging or rolling around in your neighbors petunia patch. For one thing, the neighbor isnt going to like it. For another, the cat – while grooming itself after its messy frolic in the garden – may swallow some petunia-patch dirt containing roundworm eggs, perhaps thousands of them.

In most cases of roundworm infection, a cat can swallow eggs and harbor the larvae from which they develop without harmful consequences, since they can remain dormant for years, possibly throughout a cats life. But if enough of the eggs hatch inside the animals body, develop into mature worms, and migrate throughout its gastrointestinal system, they can cause serious vomiting and diarrhea. And if 40 or 50 of them collect in the intestine, they can create a potentially life-threatening blockage. Roundworm infection is especially dangerous for kittens and for old cats with other health problems.

Not a Pretty Sight
Two types of these parasites exist in cats – Toxocara cati and Toxascaris leonina. Of the two, T. cati is by far the most common, says Dwight Bowman, DVM, PhD, a professor of microbiology and immunology at Cornell Universitys College of Veterinary Medicine. He estimates that, in the United States, as many as 10 percent of adult feral cats harbor these parasites.

The rate of infection is much lower in well-cared-for, housebound felines, he says. These worms – or ascarids – are known to thrive everywhere in the U.S., including urban areas, and can survive in any climate, although, Dr. Bowman points out, they tend to do less well in very hot, dry regions where their larvae may dry up.

Mature roundworms are not a pretty sight. Dr. Bowman describes a typical adult as a white or cream-colored worm about three to five inches long, with a head that kind-of curves forward. If you could view one of these creatures head-on, he says, It would look a little bit like a cobra.

A Winding Path
The parasite occurs naturally (unexplainably so) in the feline small intestine. There are three ways in which T. cati is passed from one cat to another:

Consuming the parasites eggs by ingesting soil that has been contaminated by an infected cats feces. This usually occurs during grooming when the cat licks contaminated dirt from its feet and fur.

Eating the tissue of an intermediate host – such as a rodent, bird, cockroach, rabbit or chicken – in which a larval roundworm can persist in a dormant phase, enclosed harmlessly within a cyst.

Ingesting larvae while nursing from an infected queen. This is the most common mode of transmission and the reason that kittens account for the vast majority of felines at risk for serious roundworm-caused illness. Although the larvae in the mother cat may be dormant, they become active during pregnancy, migrate to the mammary glands, and are subsequently carried to the offspring in the milk.

Dr. Bowman describes what happens next: First, the ingested eggs go to the stomach. They stay there for a little while, long enough for a lot of them to open and the larvae to develop. At that point, the larvae are about a millimeter long.

Then the larvae dig into the stomach wall, where they typically remain for about two or three weeks, after which they migrate into the small intestine. They dont go into the bloodstream or anywhere else. They never leave the intestinal tract, and its there that they develop into adults. The whole process – from the time the eggs are ingested to the time they are fully grown – usually takes two months or so.

Signs of Infection
A cats physical reaction to the presence of roundworms in its system is, for the most part, benign. In fact, says Dr. Bowman, most cats wont know theyre infected until they are hosting large numbers of fully grown worms. But thats not to say that a problem doesnt exist, he notes. No one would like to have 40 or so five-inch-long worms swimming around in their intestines.

An infected cat may develop serious diarrhea, a natural process for ridding the intestines of the irritating worms. Or, toward the same goal, an animal may have frequent bouts of vomiting – a counterproductive process in that many of the regurgitated creatures are apt to be swallowed and, thus, to regain entry into the digestive system.

The most severe health threat is an impacted intestinal tract – caused by the sheer physical mass of harbored worms – and the possibility that, as the worms move about, they may cause a perforation of the bowel wall, which can lead to lethal infection or hemorrhage. Kittens are especially vulnerable in this regard, Dr. Bowman observes. The animals are smaller and their tissues are thinner, he says, and these worms are big and powerful.

Zoonotic Potential
The control of roundworm infection requires regular fecal examination, appropriate therapy, and preventive sanitation measures. These measures are vitally important not only because of the threats that the ascarids pose to feline health, but also because of their role as zoonotic agents – the sources of disease that can be transmitted from animals to humans.

If humans accidentally ingest soil contaminated by roundworm eggs, they are at risk for developing a disease called larval toxocariasis. In this condition, the larvae may travel to any area of the body – such as the brain, liver, lung or heart – that has blood vessels large enough to accommodate them. This may result in hemorrhaging or tissue inflammation. The larvae may also travel to the retina, the light-sensing tissue at the back of the eyeball, and cause lesions that resemble tissue abnormalities characteristic of retinoblastoma (cancer of the retina).

In humans, roundworm infection occurs most frequently in young children who put their hands in their mouths after playing in soil, a litter box, or a sandbox in which a cat has defecated. Children with pica – the abnormal habit of eating dirt – are especially prone to roundworm infection.

Usually, explains Dr. Bowman, the larvae will migrate into muscle tissue and nothing happens to the child. But if the child eats 10,000 eggs and they migrate to the liver, the child is going to be sick with stomach pain caused by fluid buildup in the abdominal cavity. Cases have also been reported, he adds, in which roundworm larvae have migrated to a childs eye, the infection has been misdiagnosed as retinoblastoma, and the childs eye has been removed unnecessarily.

Testing and Treating
Typical signs of feline roundworm infection include vomiting, bowel irregularity (either diarrhea or constipation), increased appetite, sometimes a shaggy hair coat, and sometimes a pot belly. Confirming the presence of the offending ascarids through fecal examination is a fairly simple matter, says Dr. Bowman. A veterinarian will mix a small amount of the cats stool in a special solution that causes the eggs to float to the top. They will be visible when the solution is examined microscopically.

Noting that roundworm infection should be suspected in all young cats, Dr. Bowman recommends fecal examination – and deworming if needed – as a routine component of any kittens earliest health care. He suggests that older cats be tested twice a year.

There are lots of good drugs available to prevent or get rid of roundworms, says Dr. Bowman. As examples, he cites Interceptor, Drontal and Nemex, which are oral medications, and Revolution, a topical agent that works internally against fleas and hookworms as well as roundworms.

All of the deworming drugs can be administered by a cats owner. The frequency with which a cat should be dewormed will be determined by a veterinarian and will depend largely on an animals age, the apparent severity of roundworm infection, and the animals general health.