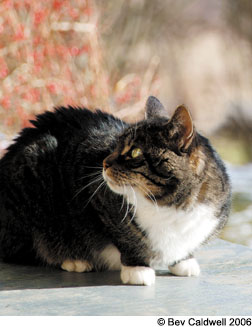 A virus, unlike a bacterium or a fungus, is not a living organism. Rather, a virus may best be described as a complex submicroscopic structure consisting of a bit of genetic material – its DNA or RNA blueprint – encased in a protein shell. Although more of a chemical than a creature, a virus nevertheless has an irrepressible inclination to reproduce itself rapidly and without limit in the body of a host animal that it has infected – your cat, for instance.

Once it has entered a host, a viruss fundamental goal is to make as many copies of itself as possible as quickly as possible. In the process of replication, some types of viruses can crowd so many copies of themselves within a host cell that the cell bursts and distributes virus throughout the surrounding area. This self-perpetuating infection can spread at a furious pace.

If the host happens to be a cat with a naturally powerful immune system or one that has been vaccinated against a specific virus, the invasion may be successfully countered. But all too often, a virus will overwhelm a cats body, resulting in a serious and perhaps fatal disorder. The signs of infection range widely, depending to an extent on the specific virus involved, and include severe respiratory distress, vomiting and diarrhea, and central nervous system damage.

In short, says James Richards, DVM, director of Cornell Universitys Feline Health Center and editor-in-chief of CatWatch, a virus can be appropriately characterized as a piece of bad news wrapped in a protein.

Common Viruses
According to Dr. Richards, cat owners should be especially aware of the following seven feline viruses:

The condition is brought about by viruses attacking these important cells. The disease also typically manifests itself in the gastrointestinal tract, where it attacks the cells that line the intestines. In feline fetuses or newborn kittens, the virus can assault the central nervous system, where it affects brain cells in the cerebellum.

Kittens are most susceptible to this highly contagious disease, says Dr. Richards. We see it most frequently in animal shelters, where it can wipe out an entire population of kittens.

Feline herpesvirus (FHV) – a virus that causes severe upper respiratory distress. As with FPV, kittens are especially subject to infection with this virus, especially young animals living in crowded environments. According to Dr. Richards, the virus is frequently passed from one animal to another via secretions from the respiratory tract. Most cats are chronically infected with the virus, whether theyre sick or not, he explains. Cats pick it up and pass it to one another through licking and grooming, so a lot of young cats can be infected by their mothers.

In addition to signs of respiratory illness – sneezing, troubled breathing and so forth – affected animals may suffer from malnutrition, since nasal congestion caused by the viral infection interferes with their sense of smell and consequently suppresses their appetites.

Feline calicivirus (FCV) – a virus that most often infects the upper respiratory system and oral cavity. Like FHV, this virus – which can survive for days at room temperature – is found in respiratory and oral secretions and is easily spread through grooming. The signs, such as sneezing, runny nose and respiratory system congestion, are also similar to those associated with FHV, says Dr. Richards, but with FCV, infected cats are likely to develop oral cavity disease as well – sores and ulcers in the mouth. Although vaccines have been developed that lower a cats likelihood of becoming ill from this virus, a vaccinated animal can still become infected if sufficiently exposed.

Rabies virus – a virus that causes an inevitably fatal disease of the central nervous system. Although this especially lethal disease can affect humans as well as other animals, it is more frequently reported in cats than in any other domestic animal, says Dr. Richards.

Particularly dangerous is the furious stage of the disease, in which an affected cat may attack another animal or a human and thereby spread the virus. This stage eventually gives way to a paralytic stage, which ends with the affected animals death. Dr. Richards notes, Potential transmission of the virus from animals to humans poses a significant public health problem. In areas of the country where wildlife rabies is common – and even in some areas where it is not so common – vaccination against this infection is generally required by law.

Feline leukemia virus (FeLV) – a virus that causes a gravely serious infection that is known to directly or indirectly cause several feline diseases. As many as three percent of apparently healthy cats in the U.S. – and a much higher percentage of sick ones – are thought to be infected with this potentially deadly virus. Its presence is most notably associated with the development of lymphosarcomas, cancerous tumors made up of masses of white blood cells.

Another common manifestation of FeLV infection is nonregenerative anemia, a condition characterized by a severe reduction in a cats ability to produce red blood cells. There are loads of this virus in an infected animals saliva, says Dr. Richards, so it is commonly passed among cats who are good buddies and are in the habit of licking one another. Due to this habit, he notes, some people refer to FeLV as an infection of friendly cats, but it can be passed through bite wounds as well. It can also be transmitted by an infected queen to her kittens, he adds.

Feline immunodeficiency virus (FIV) – a virus causing an infection that eventually weakens a cats immune system and subjects the animal to numerous opportunistic diseases. The clinical signs of this type of infection, which is approximately as common as FeLV, include loss of appetite and severe weight loss, persistently high fever, oral cavity sores and inflammation and chronic diarrhea. Infections of the skin, urinary bladder and upper respiratory system are also frequently seen.

As the infection progresses, a cat with FIV will become increasingly susceptible to severe disorders caused by secondary bacterial and fungal infections. FIV infection is most often transmitted in the saliva of an infected cat, typically through bite wounds inflicted during a fight. Dr. Richards refers to FIV as an infection of unfriendly cats.

Feline infectious peritonitis virus (FIP) – a virus that causes a disease affecting many parts of a cats body. This virus is called a corona virus, so-named for the halo-like appearance of its surface. Many cats are infected with feline coronaviruses, but only a few ever get sick with FIP, says Dr. Richards. These viruses mutate like crazy, however, and we believe that, in those animals that do get FIP, it is a mutated form of this usually harmless virus that is responsible. The onset of clinical signs may be sudden – especially in kittens – or may occur slowly over a period of weeks.

Generally, there are two forms of the disease – wet and dry. The wet form is far more sudden and severe, marked by the accumulation of fluid in an affected animals abdominal or chest cavity. Signs include loss of appetite, weight loss, fever and lethargy. The condition primarily affects young cats, Dr. Richards notes, and is a routinely fatal condition.

Vaccine Options
The American Association of Feline Practitioners (AAFP) and other veterinary organizations strongly recommend that all cats be routinely given protective vaccines and periodic boosters for four of these seven viruses – FPV, FHV, FCV and rabies. Although vaccines exist for the other three viruses noted (FeLV, FIV and FIP), experts recommend vaccination only if indicated by an individual cats lifestyle, age and risk of exposure.