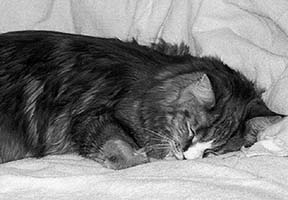 Big sneezes, runny eyes and a stuffed-up nose go hand in hand with human flu – and theyre also signs of your cats upper respiratory infection. Cats commonly get feline calicivirus (pronounced cal-EE-see and sometimes called FCV), which is one of the types of virus that cause flu-like signs in cats. Thankfully, cats cant catch our virus and we cant catch theirs.

It tends to affect kittens, multiple-cat households and shelters the most. Cats that live in crowded conditions – particularly ones that are poorly ventilated, arent kept clean and wherein the temperatures range to extremes – are the most likely to contract calicivirus. Catteries, particularly those that are not sanitary, are prone to outbreaks.

Psychological stress can also play a part, and the introduction of another cat into a clean, uncrowded household can wear down the immune system enough for the cat to contract the virus when the cat would not have normally done so.

The signs of calicivirus usually last a week or two in adults – a little longer in kittens – and most cats recover uneventfully. Signs vary, but generally include fever (a cats normal temperature is between 100oF and 102.5oF, and a little higher is normal on hot days), a stuffed-up runny nose and subsequent poor sense of smell (which can lead to a lack of appetite), runny eyes, mouth ulcers and even lameness. Most cats recuperate uneventfully, although rarely some cases can be fatal; since calicivirus can cause pneumonia, most associated deaths are from pneumonia in kittens.

How Its Spread
As with many viruses, direct or indirect contact with eye and nose discharges, saliva and feces can cause infection. When cats sneeze, the aerosolized droplets can infect other cats that are nearby (the droplets dont travel much more than about five feet through the air). Cats can catch it through direct contact with one another or by sharing a litter box. The most common means of transmission is by contaminated articles such as hands, clothing, food dishes and toys.

Even if a cat is vaccinated for calicivirus, the animal is not necessarily protected.

Infection with FCV is very common, said Kate Hurley, DVM, a specialist in animal shelter medicine from the University of California Davis School of Veterinary Medicine Maddies Shelter Medicine Program. Many cats continue to shed virus for weeks or months after recovery, and some go on to be lifelong carriers. Although vaccination is widely practiced, it is only partially effective. FCV vaccine does not prevent infection, and although vaccination mitigates the severity of disease in some cases, vaccine resistant strains are known to occur.

As with any virus, theres not much you can do other than let it run its course, unless the cat gets a secondary bacterial infection. (In that case, antibiotics are needed.) Supportive care can include aromatic food, such as liver or fish flavored diets, which can be an incentive for a poor appetite. Also, the cleaning of eye and nose secretions can make your cat feel more comfortable.

There are many strains of calicivirus, and some are more dangerous than others; in some cases, cats just sneeze and have tongue ulcers, while in other more virulent strains cats can die. In 1998, veterinarians at the University of California at Davis saw the effects of an outbreak of a highly virulent strain in northern California (now referred to as FCV-Ari). In addition to the regular signs, infection with this strain was associated with edema, skin crusting and ulceration, multiple organ involvement and death even in otherwise healthy, vaccinated adult cats. Since then, several other outbreaks of different strains of highly virulent calicivirus have occurred in the U.S. A large outbreak of another strain – called FCV-Kaos – occurred in southern California in 2002, in which the most common sign was swelling of the head and legs.

Ways to Prevent the Virus
While it is possible to lessen the occurrence of calicivirus, it is probably not possible to prevent it entirely. Most preventive measures are actions that should be taken by employees of shelters, catteries and veterinary hospitals. These recommendations are intended for outbreaks of virulent systemic calicivirus, not the everyday strain. Employees should use infectious disease precautions when dealing with cats with any upper respiratory infection, a high-risk history or suspicious signs. They should use a disinfectant proven effective with this virus, close any area to cats that cannot be cleaned appropriately, isolate all exposed cats and close admissions to new cats if an internal spread has occurred. If an outbreak is suspected, staff should contact area animal hospitals, shelters and appropriate public health officials.

Outbreaks of virulent systemic feline calicivirus are recognized with increasing frequency, said Dr. Hurley. Although no specific treatment exists, spread of disease can be minimized by prompt recognition, clear communication and implementation of effective control measures.