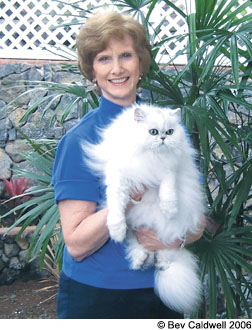 Frightening to ponder, but nevertheless a fact: All cats – no matter how pampered, how old, how young, how well fed or how well protected they are from the many dangers lurking beyond their doorsteps – are at potential risk for falling victim to cancer.

If undetected and untreated until it has progressed to an advanced stage – marked by the uncontrolled proliferation of cells throughout the body – cancer is very likely to be fatal. As in human cancer, however, many feline cancers are manageable – perhaps even curable – if the signs of the condition are recognized early and the patient is given prompt and expert veterinary care.

Typical Signs
Clinical signs indicating that a cat is harboring an abnormal cell growth (neoplasm) are numerous and varied, depending on the site of the cancer and its stage of development. An owner may notice, for example, an unusual lump or swollen area that doesnt go away or an open sore that refuses to heal.

Mysterious bleeding from the mouth or anus may occur. An affected animal may experience trouble breathing, difficulty in urinating or defecating, uncharacteristic lethargy, a reluctance to exercise or sudden weight loss.

Veterinarians are well aware of these and other ominous signs. Just as important – if not more so – is the need for cat owners to recognize them as well and to seek immediate veterinary counsel. The sooner a cancer is diagnosed, the better are the odds that progression of the disease can be halted and the cats life spared or at least significantly extended.

A Frequent Occurrence
Although the precise number of cats that are stricken with cancer each year is unknown, Kenneth Rassnick, DVM, says it occurs frequently, judging from the caseloads handled routinely at feline cancer centers in urban areas.

A number of years ago, says Dr. Rassnick, an assistant professor of oncology at Cornell Universitys College of Veterinary Medicine, one study estimated that about two percent of cats will develop cancer at some point during their lives. So its definitely a common disease, especially in older cats, although there are some virus-induced cancers that put younger animals at risk.

Most Common Cancers
Neoplasms can emerge in almost any area of a cats anatomy, taking the form either of benign tumors, that are generally incapable of spreading (metastasizing), or malignant cancers, those that can metastasize lethally throughout the body.

According to Dr. Rassnick, the four malignant feline cancers most frequently treated at the Cornell University Hospital for Animals (CUHA) are as follows:

Lymphoma, which accounts for about 30 percent of feline cancer cases at CUHA, is a malignancy affecting certain types of white cells called lymphocytes. Many cases result from infection with feline leukemia virus (FeLV), and it is likely, says Dr. Rassnick, that infection with feline immunodeficiency virus (FIV) also induces lymphoma. Studies have strongly suggested that routine exposure to tobacco smoke may significantly increase a cats chances of getting the disease.

Both young and old cats can contract lymphoma, with outdoor cats more susceptible than indoor cats. And, says Dr. Rassnick, There is some evidence that some breeds – Siamese, Persians, Himalayans – are at greater risk.  Male and female cats are similarly vulnerable.

Typical early signs of feline lymphoma include enlarged internal organs, diarrhea, vomiting and weight loss. If untreated, the disease will inevitably spread throughout the lymphatic system, resulting in gradual weakening of the stricken cat and its eventual death.

Cancer of the skin and underlying tissue, which accounts for some 25 percent of cancer cases observed at CUHA, usually emerges in the form of small growths that spread uncontrollably and invade other tissues and organs. One common type of this disease is squamous cell carcinoma, which affects the  cells in the outer layer of skin and is most often the result of prolonged exposure to sunlight.

At high risk for squamous cell carcinoma of the skin are white or light-colored cats; their noses, eyelids and ear tips are the areas most often affected. Outdoor cats that habitually bask in bright sunlight and are thus excessively exposed to potentially damaging ultraviolet light rays are at greatest risk, says Dr. Rassnick.

Vaccine-associated sarcomas originate under the skin at sites where certain injectable vaccines have been administered. These malignant cancers are rare, but very serious. The Vaccine-Associated Feline Sarcoma Task Force (VAFSTF) was formed in the mid 1990s to address this issue; for more information, see www.avma.org/vafstf.

Oral cavity cancer, which yields tumors that affect the superficial lining of the mouth as well as the bony components of the upper and lower jaw, accounts for about 15 percent to 20 percent of feline malignancies seen at CUHA.

Signs of this condition include lumps in the oral cavity, bleeding from the mouth, foul breath, loose teeth, apparent pain in eating and drinking, facial deformity and possible facial paralysis. If caught early, says Dr. Rassnick, oral cancer can be fairly well controlled with surgery and radiation. But if an oral tumor is undetected until it has become large and invasive, it can be very difficult to treat successfully. In addition, he notes, studies have associated an elevated risk of certain types of oral cancer with an animals consumption of canned tuna fish and canned cat food.

Mammary gland cancer, which is most often a disease of older, unspayed female cats, is the fourth most frequently seen type of cancer at CUHA, accounting for about five percent of cases. These tumors generally develop beneath a nipple and may eventually spread to the lymph nodes, lungs, liver, adrenal glands, kidney and other areas of the body.

The earliest signs of mammary cancer are noticeable lumps in an animals breast area, which can often be detected by means of a veterinarians or owners routine palpation of a cats underside. Of all cancers, mammary gland cancer is the most preventable, since its occurrence can be avoided by spaying a female cat at an early age.

An assortment of other, less common feline cancers – such as those originating in an animals liver, bones or intestines –  comprise the remaining one-fourth or so of neoplasms that are seen at CUHA, says Dr. Rassnick.

Diagnosis and Treatment
As soon as a veterinarian notices evidence of cancer during the course of a routine physical exam, a number of sophisticated diagnostic procedures may be implemented in order to rule out the presence of the disease or to determine which type of cancer is present. In addition to a blood cell count and blood chemistry panel, the veterinarian may perform a cytologic exam by inserting a needle into a suspicious tissue area and withdrawing cells for microscopic examination. Or the veterinarian may surgically remove a piece of tissue to be studied microscopically.

If a malignancy is diagnosed, the veterinarian will stage the disease, a process that is apt to involve the use of such imaging techniques as X-ray, ultrasound, CT scanning and MRI to determine the extent of the cancers spread.

Reducing the Risk
Based on current understanding of feline cancer and its causes, says Dr. Rassnick, owners can play a significant role in reducing the chances that their cats get the disease by, for example:

Keeping them indoors in order to minimize sunlight and exposure to viral infection;
Avoiding regular exposure to tobacco smoke;
Having females spayed at an early age;
Refraining from feeding them tuna fish;
Limiting vaccinations to those that their veterinarians consider essential.

Also, Dr. Rassnick advises, owners should make sure that their cats undergo routine veterinary examinations in order to improve the odds of early cancer detection.