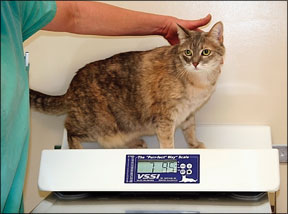 A cat with chronic illness is one of the greater challenges we face when we share our lives with an animal companion. The challenge involves both medical care – which can be expensive and complicated – and also the necessary emotional involvement.

While cats are receiving better veterinary care and better nutrition, theyre also living longer. This is a blessing for cat lovers – but

greater age also brings with it the greater likelihood of chronic disease and illness.

There are some life-threatening, chronic diseases that are relatively common, says Richard Goldstein, DVM, a lecturer in small animal medicine at Cornell Universitys College of Veterinary Medicine and board-certified by the American College of Veterinary Internal Medicine. Kidney disease, or renal failure, is a serious health danger for many cats. “On average, one out of every three cats over the age of 12 develops some renal disease,” explains Dr. Goldstein.

Another contender is endocrine disease – most prominently hyperthyroidism in older cats – and diabetes mellitus in cats of any age. According to Dr. Goldstein, the third most common cause of extended illness in cats is cancer. And a variety of infections can develop into chronic illnesses, including upper respiratory viruses like herpes, and retroviruses, most typically feline immunodeficiency virus (FIV) and feline leukemia virus (FeLV).

Sally Mumfords 16-year-old cat, Sandy, developed two chronic illnesses. Inflammatory bowel disease was first diagnosed when Sandy was 12, but was never considered to be life threatening. The second – chronic kidney disease – was diagnosed last year and requires great vigilance because it is life-threatening.

Sandy has benefitted from various adjustments in her diet, plus daily medication with prednisolone, a steroid. Cats vary in their acceptance of pills, and unfortunately Sandy is a consistent, aggressive fighter when pilled. Sandy Mumford and family tried every recommended trick for getting a pill into a reluctant cat – and none worked particularly well. Ms. Mumford eventually found a pharmacy that was able to compound a custom-made liquid, liver-flavored form of prednisolone, a solution that worked. With the new medicine regimen in place, Sandys weight loss has slowed and her increased urination – typical of renal disease – has stabilized. “Shes acting like her old self now,” says Mumford.

Pat and Henry Signoratti lived with their cat, Hagar, for nineteen years. He was diagnosed at age 12 with hyperthyroidism. Pat admits to having always been more watchful – even worried at times – over Hagars health than that of earlier pets. For example, she recalls taking him in to see their veterinarian because the cat was sluggish, only to be told, “Its July, its hot out and hes fine.” Later, weight loss would signal that something was indeed awry, and he was then diagnosed. Daily oral medication at home stabilized him, yet he continued to lose weight very slowly.

Over time, Hagar also developed arthritis, and later a slow-growing tumor was found. Throughout this time, their veterinarian, Dr. Zimmer, was sensitive to their complicated feelings in caring for these various conditions. Dr. Zimmer offered aggressive treatment options when Hagars condition worsened, yet never pushed these, Pat recalled gratefully. He also willingly advised against most of these measures when they asked his personal opinion. This was because they knew Dr. Zimmer would respect any of their treatment choices, and because “he really knew our dear cat,” says Pat. When they decided it was time to end Hagars long life, they did so with euthanasia at their home. They remain grateful for the extended, sensitive relationship with their veterinarian, who they knew had Hagars full picture in mind.

Dr. Goldstein encourages clients to seek plenty of information for important decisions. “The more informed you get, the better,” says Dr. Goldstein. There are fine sourcebooks of information, articles on the Internet and brochures your veterinary team can provide. Remember: There are no dumb questions and rarely too many questions when speaking with the medical personnel attending your cat.

Dr. Goldstein also acknowledges that the limitations of a household, or of finances, are realities in making treatment choices. Having a multi-cat household, for example, requires budgeting medical care for all – and spending thousands of dollars on one cats treatment may deny care that the others need.

How much people are able to participate in treatment at home varies with their own comfort and ability. With diabetes, for instance, some people are prepared to administer regular insulin injections while other people are not. Cats, too, vary in their willingness to accept pilling and other treatments, like hydration. Be prepared for changes, though, even as your cat enjoys continuing health. According to Dr. Goldstein, many cats live good, long lives with chronic illness, while others turn for the worse with little warning.

Some veterinarians dont feel comfortable sharing their personal thoughts when asked what treatment option they would choose if faced with the client’s situation. Dr. Goldstein explains: “There are difficult choices where all I can offer is to tell them what I would do, if asked, but thats only useful if we have a real working relationship.”

Most of all, know your cat and keep alert for any changes in behavior or functioning. Many changes are undramatic, even subtle: Recognizing them before a check-up can be invaluable. Many chronic diseases show through weight loss. If that weight loss is quite gradual, you may not notice it until it reaches a serious level, says Dr. Goldstein.

More dependable is careful weighing, ideally on the same reliable scale. (Geriatric exams twice a year can provide this simple diagnostic check.) One family – wanting to get more frequent readings during their cat’s several-year remission from lymphoma – took the cat in her carrier to their local post office lobby after hours. There, they weighed her on the same sensitive scale each month, subtracting the carriers weight, and kept a careful record of her weight gains and losses that proved useful for prompt treatment decisions.

Obviously, chronic illnesses can at times prove to be trying, and many will ultimately lead to a cat’s death. But they can often also provide an opportunity for greater closeness and affection, as devoted humans help their chronically ill cats to maintain the highest-possible quality of life.