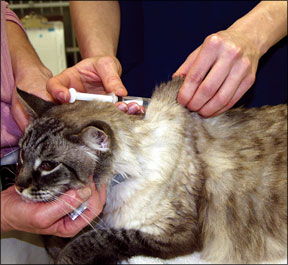 An estimated two percent of the 80 million or more cats now living in the United States will at some point in their lives develop cancer, a disease marked by the uncontrolled proliferation of cells on or within an animals hard and soft body tissues. Thanks to dramatic advances in veterinary medicine, many types of feline cancer are manageable – sometimes even reversible – if the

condition is recognized early in its development and the affected cat is treated promptly and appropriately. But any cancer that remains undetected and untreated until it has reached an advanced stage is very likely to prove fatal.

The task of diagnosing and treating feline cancer falls, of course, to the expert veterinary oncologist. Owners, however, can play a significant role in spotting a cancerous lesion at its earliest stage of development, when it is most amenable to treatment. Indeed, there are measures that a cat owner can take to prevent certain types of feline cancer or at least to minimize the risk of their occurrence.

Indications that a cat is harboring an abnormal cell growth (neoplasm) are numerous and varied, depending on the type of cancer, its location and its stage of development. Although feline cancer occurs most frequently in middle-aged and geriatric cats, these signs may be evident in young animals as well and should be reported to a veterinarian without delay, regardless of a cats age.

An owner might notice, for example, an unusual lump or swollen area that doesnt go away or an open sore that refuses to heal. Mysterious bleeding from the mouth or the anus may occur. An affected animal may experience trouble breathing, difficulty in urinating or defecating, uncharacteristic lethargy, reluctance to exercise or sudden weight loss.

According to Dr. Margaret McEntee, an associate professor of oncology at Cornell Universitys College of Veterinary Medicine, the four most frequently observed malignant feline cancers treated at the Cornell University Hospital for Animals (CUHA) are as follows:

Typical early signs of feline lymphoma involving the gastrointestinal tract include diarrhea, vomiting and weight loss. If untreated, the disease will inevitably spread (metastasize) and involve other sites, resulting in the gradual weakening of a stricken cat and its eventual death.

Given the well-documented risks for this type of cancer, Dr. McEntee points out, owners stand a chance of preventing its occurrence by having their cats vaccinated against FeLV if they are at risk of exposure to already-infected cats; by keeping unvaccinated cats indoors in order to avoid contact with unvaccinated cats in the neighborhood; and by reducing or eliminating their exposure to second-hand cigarette smoke.

At high risk for skin cancer are white or light-colored cats, and the areas of the body most often affected are those that are lightly pigmented, such as the nose, eyelids and tips of the ears. Outdoor cats that habitually bask in bright sunlight and are thus excessively exposed to potentially damaging ultraviolet light rays are at greatest risk.

To significantly lower the risk of skin cancer, Dr. McEntee advises owners as follows: (1) limit the amount of time that your cat spends in direct sunlight (or prohibit it entirely), especially during peak sunlight hours (between 10:00 AM and 4:00 PM); and (2) limit the number of vaccinations that your cat receives, a preventive measure that must be taken with the guidance of your veterinarian.

To detect evidence of this type of cancer, says Dr. McEntee, owners should routinely palpate an animals mammary glands and nipples in an effort to discover any unusual lumps or bumps. She points out, however, that the risk of mammary gland cancer can be decreased substantially by spaying a female cat by six months of age.

The exact causes of oral cavity cancer in cats are largely unknown, says Dr. McEntee. “It may be caused by exposure to cigarette smoke that accumulates on a cats haircoat and is ingested when the animal grooms itself,” she notes, “or it may be the result of chronic gingivitis and dental disease.”

The likelihood that a cat will be afflicted with advanced oral cavity cancer may possibly be reduced by eliminating its exposure to second-hand smoke and, of course, by making sure it has routine and very thorough examinations of its teeth and entire oral cavity.