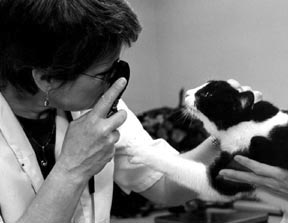 Seemingly overnight, your cats eyes have turned swollen and red. Hes squinting, sneezing and sniffling, weeping goopy discharge. Moping lethargy has replaced his usual exuberance. It may be conjunctivitis, an inflammation of the conjunctiva, or mucus membrane that encircles the eyeballs and lines the eyelids.

To complicate matters, several diseases can mimic conjunctivitis. These include diseases of the cornea (especially ulcers), uveitis (inflammation of the inner parts of the eye) and glaucoma (increased intraocular pressure).There are many causes of ocular discharge, red eye and swollen conjunctiva that are far more serious than conjunctivitis, notes Maggs. These must be differentiated from conjunctivitis, and from each other, by a veterinarian, and sometimes a veterinary ophthalmologist. While conjunctivitis alone is virtually never blinding, most of these other conditions are potentially blinding, and often very painful. They need urgent, accurate diagnosis, and prompt, effective treatment.

The Most Common Causes
Once a diagnosis of conjunctivitis is confirmed, the cause must be determined. There are only two very common causes – feline herpesvirus type 1 (FHV-1) and Chlamydophila felis (formerly Chlamydia psittaci), notes Maggs. (Much less common causes include calicivirus, bordetella and mycoplasma.) Specific diagnostics for FHV-1 or C. felis are extremely difficult because of the number of normal cats who shed organisms without evidence of disease, or who shed virus or C. felis in small, difficult-to-detect, amounts.

Might your cat be injured? Cats have such well-protected eyes (tight-fitting lids, quick reflexes, high corneal sensitivity and deep orbits) that injuries and foreign bodies account for only a tiny percentage of cases, notes Maggs. But if a cats conjunctivitis is caused by an injury or foreign body, it must be treated promptly – and correctly.

Imagine a cat with a foxtail (grass awn) in his conjunctiva, he says. You could treat that for as long as you like with a top-quality antiviral agent and it would never get better until that grass seed was removed. Rapid onset of signs does not necessarily mean an injury or foreign body, though. Infectious causes can also appear to come on very suddenly, warns Maggs.

Once a definitive diagnosis is made, treatment is straightforward. The problem is that in cats, the most common causes by far for conjunctivitis (FHV-1 and C. felis infections) are so common that many owners and veterinarians assume that all conjunctivitis is caused by these, says Maggs. This is right the majority of the time, which reinforces that narrow view. The problems begin in cases that dont respond to appropriate treatment for those diseases. These may be conjunctivitis due to one of the far less common causes, or may indeed not be conjunctivitis at all, but far more serious eye disease.

The Silent Carrier
Cats affected with conjunctivitis can become carriers, leading to recurrences of the condition and possible transmission to other cats. About 80% percent of cats whose conjunctivitis is due to FHV-1 appear to become latently infected, says Maggs. Of these, approximately half go on to shed virus throughout their lives. Some shedding cats will not show any (or very severe) signs of disease at the time they are shedding – but these silent carriers are just as likely as others with more obvious signs to infect other cats. Less is known about the C. felis carrier state, but its thought to persist at least 6-12 months.

Recurrences tend to be mild and smoldering rather than severe and acute, to affect only one eye, and often occur with little or no respiratory or systemic signs. Kittens tend to get primary (first time) disease, while recurrence is seen almost exclusively in adults. Stress is thought to be a major factor in recurrences. The severity, duration and frequency of recurrences is extremely variable between individual cats, and probably relates to that particular cat and how he copes with stress, rather than the original cause, says Maggs. Some cats never get recurrent disease (although some may shed virus), while others get such frequent recurrences that episodes merge together and the cat seems always to be showing signs.

Should you quarantine a cat that has had an episode or two of conjunctivitis? Any, and probably most, other (apparently normal) cats might also be shedding virus, and thus have a chance of infecting other cats, says Maggs. Obviously when considering adopting a cat with recurrent disease, the cost and constraints of treatment must be considered too.

Is Your Cat at Risk?
Im unaware of a way of predicting which cats will be troubled by frequent or severe recurrences, notes Maggs. Cats that live strictly indoors do have an advantage. But cats in multiple-cat households may be at risk, particularly if the cats do not get on well.

According to Maggs, lysine is believed to decrease the frequency of shedding episodes and to potentially limit clinical signs. If your cat has experienced an episode of conjunctivitis, its wise to minimize stress and limit changes in his life and environment.