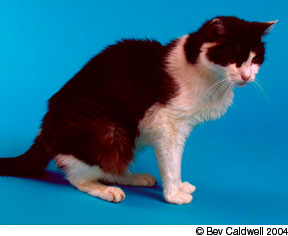 Cats and their human companions share many diseases in common. Diabetes, kidney disease, heart disease and arthritis are but a few in which treatment advances in one species can lead to advances in treating the other. No brain disease, however, made this list of common diseases until about five years ago, when a human-like disease was discovered in felines. In humans, the devastating condition is called Alzheimers disease; in cats a similar disease is known as feline cognitive disorder (FCD).

FCD does not affect every aging cat, just as Alzheimers doesnt plague every older person. Cats over the age of 10 or 12 years are most susceptible, says Stefanie Schwartz, DVM, MSc, a veterinary behaviorist at VCA South Shore Animal Hospital in Weymouth, Massachusetts who is board certified by the American College of Veterinary Behaviorists. We dont have exact numbers on how many cats are affected by FCD, but I think its under-reported, because it can be so difficult to diagnose.

Experts who perform postmortem examinations on the brains of cats suspected of having died from FCD have discovered a substance, called beta amyloid plaque, which breaks down the communication between brain cells.

Is it Aging or Disease?
Older cats may slowly and occasionally show signs of faltering brains, but the thing to look for that may indicate pathology is a consistent pattern of several clinical signs, says Dr. Schwartz, author of Dr. Cookies Guide to Living Happily Ever After with Your Cat. These may include:

Wandering aimlessly, appearing disoriented;
Major changes in sleep/wake cycles, including sleeping much more than usual and agitated behavior at night;
Problems using the litter box;
Inability to recognize people or surroundings;
Staring at walls or into space for long periods of time, especially at night.

The first thing to do is to make an appointment with your veterinarian to rule out any possible underlying physical disorder, for example, a bladder infection, diabetes or kidney failure, says Dr. Schwartz, who is also a clinical assistant professor at Tufts University School of Veterinary Medicine in Grafton, Massachusetts.  What is called for is a complete physical examination, including blood work, a urinalysis and a neurological workup.

The diagnosis of FCD is usually made by ruling out other conditions. An MRI will show the brains structure and can aid in confirming the diagnosis.

Medical Treatment
Like Alzheimers disease, cognitive feline dysfunction is a progressive and terminal illness, says Dr. Schwartz,  but there are some things you can do to slow it down or alleviate the impact of certain signs. According to Dr. Schwartz, a brain enzyme called MAOB indirectly or directly breaks down the vital brain chemicals seratonin, dopamine and norepinephrine, leading to the disorder. The prescription medication Anipryl, which is an MAOB inhibitor, can slow the disease for a while.

Anipryl can reverse or slow the progression of some signs temporarily, says Dr. Schwartz. How much varies from case to case, but the beneficial effects might last as long as six months or perhaps even several years. Unfortunately, even this medication will not stop the disease in the end.

Your veterinarian can refer you to a veterinary behaviorist who is best trained to treat this complicated illness and to curb accompanying signs such as excessive vocalizing. There are also medications that can help with this problem.

Environmental Adjustments
You can do a number of things to make your cats life safer and more rewarding during the course of this condition. One way to ease the way for a cat with a failing memory is to keep things familiar by not moving the furniture, if possible. It is also a good idea to keep litter boxes in several different places so your cat will not have to search too hard to find one. This is especially helpful if your house is large or has more than one floor.

To prevent accidents or wandering, keep doors closed to basements and other areas that are dangerous for your cat. Because of wandering, some cats need to be confined to one room at night.

Maintain your cats general health with veterinary visits to make sure that other diseases of old age do not further complicate your pets health, says Dr. Schwartz.
By all means, keep playing with your cat and stimulating her curiosity. This will keep her remaining memory working as well as it can. Within the limits of her ability, encourage physical activity.

Your cat will progressively deteriorate from CFD, following a similar path of decline as human patients with Alzheimers. It may be very painful for you to realize that your cat no longer comes to you or seems to know you.

When this happens, you will have to go to your cat and soothe him as best as possible, remembering the good years. And in the end, your love, affection and attention to his comfort will prove to be the best medicine of all.