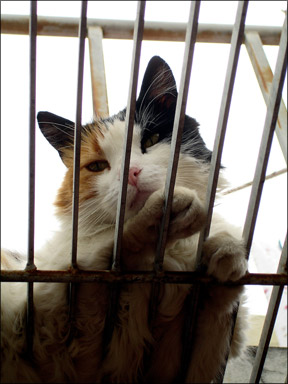 Ringworm (dermatophytosis) is a superficial – yet highly contagious – fungal skin infection that affects many animals, as well as humans. In healthy cats, it is generally self-curing, and should resolve over the course of several months. However, treatment will shorten the course and help to prevent it from

spreading, including to humans. This is particularly important in a shelter environment where infection can negatively impact adoptions, and is a risk for staff and visitors.

This report (“Eradication of feline dermatophytosis in a shelter: a field study,” Veterinary Dermatology, 2009) describes a successful eradication of fungal infection from a shelter in the UK. The authors used a three-part method in the particular facility. One area was used to isolate cats with lesions and positive skin culture; cats with no lesions – but positive by fungal culture – were placed in a separate area; and healthy, fungus-free cats were kept in a third area. Cats in the first two groups were treated topically (enilconazole) and systemically (itraconazole).

Additionally, the environments were sampled every three weeks using a dust-catching cloth. Sequential use of detergent (cleaning) and one percent sodium hypochlorite (disinfection) were used on the premises and materials. Cats were not moved into group C (fungal-free) until two negative culture results (done every two weeks). The protocol described did carry a significant cost, but it proved successful in eradicating fungal infections from the shelter, which housed approximately 140 cats. In addition, by isolating incoming animals initially and assessing for infection, maintenance of a fungal-free population was possible.

Degenerative joint disease (DJD) or arthritis in cats is often associated with pain, which can result in decreased mobility. This study (“Evaluation of a therapeutic diet for feline degenerative joint disease,” Journal of Veterinary Internal Medicine, 2010) tested a diet high in eicosapentaenoic acid (EPA) and docosahexaenoic acid (DHA) content and supplemented with green-lipped mussel extract and glucosamine/chondroitin sulfate for its pain-relieving and activity-enhancing effects in cats with painful and mobility-impairing DJD.

Forty client-owned cats were enrolled in this study. Outcome measures were subjective owner and veterinarian assessments, and objective activity monitoring. Results showed that activity significantly increased in the cats fed the test diet over a control diet. Evidence is also demonstrating that diets high in DHA and EPA might help to prevent obesity and promote weight loss by creating an appropriate physiological environment.

Feline immunodeficiency virus (FIV) infection is well-known as a cause of illness in cats worldwide, yet little data has been available about infection rates in Canada. In this retrospective study (“Naturally acquired feline immunodeficiency virus (FIV) infection in cats from western Canada: prevalence, disease associations, and survival analysis,” Canadian Veterinary Journal, 2010), 1205 client-owned cats in western Canada were tested for FIV antibodies. 5.5 percent of the cats were FIV-antibody positive. Infected cats were more likely to be males, to have bite wounds and were older than antibody-negative cats.

The survival time of FIV-positive cats was not significantly different from age and gender matched FIV-negative cats. This research adds to the knowledge that veterinarians in Canada need to develop testing and management plans for FIV.