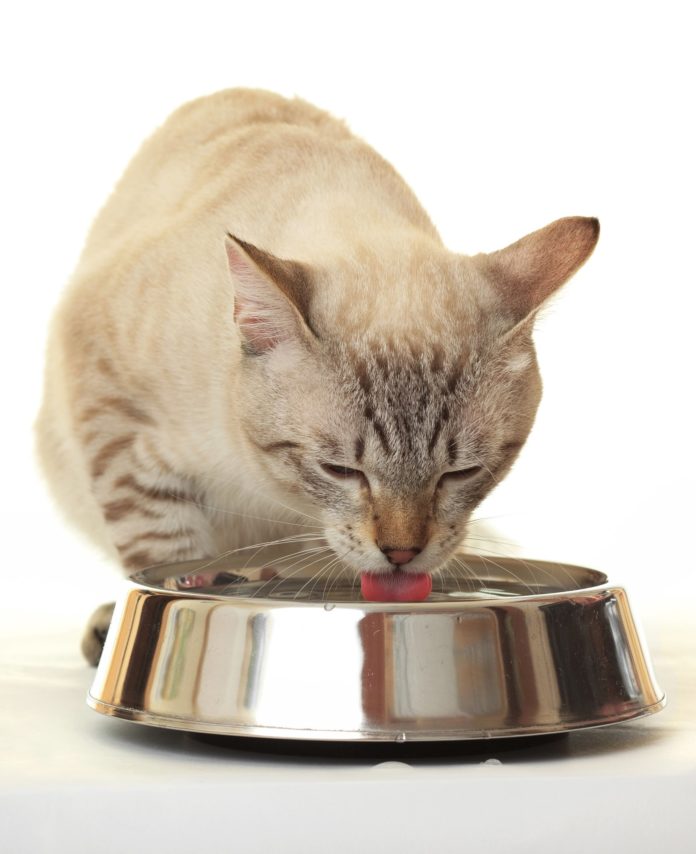 While Cushing’s disease, which is technically called “hyperadrenocorticism,” is more common in dogs than cats, feline members of your family can have this health problem.

The symptoms you see are the result of overproduction of cortisol from the adrenal glands and include:

What Are the Adrenal Glands?

Your cat has two adrenal glands, which are tiny glands located near the kidneys. The adrenal glands make cortisol and keep it in store for times of stress. You can think of cortisol as a “fight or flight” response hormone.

The pituitary gland (located near the brain) acts to stimulate production of cortisol by secreting adrenocorticotropic hormone (ACTH). For a cat to have an overabundance of cortisol, either the pituitary is sending out too much ACTH or the adrenal glands themselves are overproducing cortisol.

The classic feline case of Cushing’s syndrome involves an older female cat. In fact, 75 percent of cases are diagnosed in female cats.

Most feline cases—about 80 percent—result from a pituitary problem. The other 20 percent of cases usually have adrenal tumors, which run about 50/50 for benign versus malignant. The different etiologies mean that more diagnostics may be required to pinpoint the exact cause.

What most of us will notice first in a cat with hyperadrenocorticism are skin problems. Cats with this problem often have thin skin with some hair loss. The skin can be truly fragile. If the skin/coat is roughly “scruffed” or grabbed, the cat’s skin may split open. Many cats with Cushing’s disease will develop a pot-bellied appearance and have muscle wasting, meaning a loss of muscle.

Another common presentation for Cushing’s disease is a cat who has diabetes but is difficult to regulate and treat. Some of these cats will be insulin-resistant. The problem could be underlying Cushing’s, since cortisol levels can interfere with insulin metabolism. With glucose spilling over into the urine, there is added potential for urinary-tract infections.

The clinical signs of increased drinking and urinating can confuse or delay the appropriate diagnosis, since these signs fit not only Cushing’s, but also other diseases, including diabetes mellitus, hyperthyroidism, and kidney disease.

Diagnosing Cushing’s can be challenging in cats. Because it is less common than in dogs, dosages for test diagnostics aren’t as clear cut. In addition, the possibility of underlying diabetes can confuse some results of diagnostic testing.

Usually, the veterinarian’s first step in determining what is wrong with your cat is basic bloodwork and deciding if diabetes is involved. A urinalysis can provide important information about your cat’s health as well.

If your cat tests positive for diabetes, it makes the most sense to treat that condition first. If your cat does not respond well to insulin treatment, then it is time to consider looking at possible Cushing’s disease. A dexamethasone-suppression test is often the first step. This involves giving your cat a high dose of a steroid via injection and following up with blood samples to look at cortisol levels. This test is usually done over the course of eight hours.

The ACTH stimulation test involves injection of artificial ACTH to see if your cat’s body responds with an excess of cortisol production.

Abdominal ultrasonography has also been suggested by some experts as a diagnostic aid. Unfortunately, feline adrenal glands are small (and located by the kidneys, which may obscure them). Still, an ultrasound is usually worth doing. Computerized tomography (CT) scans may also help if available.

For an adrenal tumor, surgery is the best choice. Radiation can be attempted for pituitary growths, though it is not commonly available. These options can be curative.

The effect is both temporary and reversible, requiring your cat to be on this medication for life. Remember, you are not “curing” the disease—you are controlling it. Trilostane also may help with the control of diabetes in cats that have been difficult to regulate due to the hyperadrenocorticism.

Luckily for most of our feline companions, Cushing’s disease is an unusual diagnosis in cats.

The Glands Behind the Scenes

ACTH (adrenocorticotrophic hormone) is the hormone that can overstimulate production of cortisol by the adrenal glands leading to Cushing’s disease. This is generally associated with a tumor of the pituitary gland, usually a macroadenoma. Other hormones may be increased due to this tumor in addition to ACTH.

Diagnosis of pituitary cancers relies on the various blood tests discussed as well as an MRI to examine the brain and surrounding tissues. Surgery to remove these tumors is difficult, but radiation is showing some success in treating these tumors.

The adrenal glands are very small glands located at the tip of the kidneys. They can be difficult to visualize via ultrasound due to the usual fat pad they are settled into and the fact that normal adrenal glands are quite small.

The adrenal gland itself has two components, the outer area or cortex and the inner area called the medulla. The cortex itself has three layers, each of which produces a separate hormone. For cats with Cushing’s disease, the middle layer, which produces cortisol, is the important layer.

Tumors that affect this layer of the adrenal gland are uncommon in cats compared with dogs, but they can lead to an abnormal amount of cortisol being produced. Diagnosis is generally via bloodwork “rule outs” and identifying an adrenal growth via ultrasound or CT scan. The ideal treatment isremoval of the affected gland. Often just one gland is involved, and cats do quite nicely with just the remaining healthy adrenal gland.

ACTH (adrenocorticotropic hormone) is a pituitary-produced hormone that stimulates the adrenal gland to produce cortisol, which is a natural steroid. Cosyntropin can be injected to stimulate release of ACTH. Blood samples are taken pre and post injection.