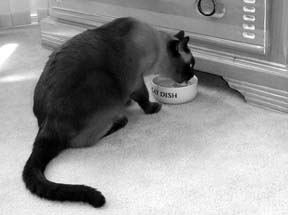 Hyperadrenocorticism, or Cushings Syndrome, says Dr. Ellen Behrend, is a rare syndrome in cats that occurs due to an excess production of cortisol. Dr. Behrend, a veterinary endocrinologist with the Auburn University College of Veterinary Medicine, explains: Cortisol is one of the stress hormones. When the body is under stress, cortisol helps the body provide sugar for the organs.  You cant live without cortisol, but in excess amounts, it can cause all sorts of problems. For example, she says, too much can suppress the immune system or make the body resistant to insulin. For this reason, 80 percent of cats with Cushings Syndrome also have diabetes.

Because Cushings Syndrome is so uncommon in cats, no breed association has been identified. Signs include:  increased appetite, excessive drinking and urination, pot-bellied appearance, recurring infections (skin, urinary tract or systemic), hair loss which can be quite subtle, e.g. only affecting the ears. A severe sign is thin skin, which tears spontaneously, due to a decrease in collagen, a strength-giving component of the skin. It is pretty dramatic if it occurs, she says.

Dr. Behrend says it is sometimes difficult to determine which signs are diabetes-related and which are Cushings-related.  She also notes that cats may often be severely affected by the time they are diagnosed.

Diagnosis can be a challenge, says Dr. Behrend. No test is perfect. Testing usually consists of two or three different blood tests to confirm the diagnosis. The changes in the test results may be so subtle, she adds, that retesting weeks later is sometimes needed.

Once we decide it is indeed Cushings, we need to determine which form it is, maybe even using ultrasound to look at the adrenal glands, the major source of cortisol, she explains.  In the pituitary-dependent form, both adrenal glands get big and plump, while with the adrenal tumor type, only one gland is enlarged.

The drugs used to treat Cushings in other species dont work in most cats. Says Dr. Behrend, Because of this, the preferred treatment for the pituitary-dependent form is to remove both adrenal glands and then treat the cats with hormone replacement therapy for the rest of their lives.  She adds, if the problem is an adrenal tumor, removal of the involved gland is recommended. Due to the low numbers of reported cases, there are no solid statistics available regarding life expectancy after these treatments, but some cats do quite well. In about 50 percent of the cats, the diabetes resolves when their Cushings Syndrome is controlled.