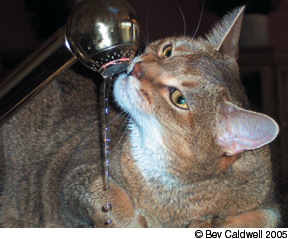 While exhibiting her normally hearty appetite, your chubby little cat Wanda seems to be getting a bit slimmer. This, in itself, may not be a cause for concern. In fact, you might think that its just as well because Wanda could afford to lose a pound or two. But if you notice that – along with her weight loss – shes been drinking huge amounts of water lately and urinating with uncharacteristic frequency, you need to take her to your veterinarian for a checkup.

A Hormonal Malfunction
Diabetes is the result of a malfunction in part of the endocrine system, a group of small structures that manufacture chemicals called hormones and deliver them into the bloodstream. Once they reach their respective destinations, hormones interact with the target tissue to enable countless bodily processes and to make sure they are all functioning properly.

In cats – as well as in dogs, humans and other mammals – the components of the endocrine system include tissues in the pancreas and the adrenal, parathyroid, pituitary and thyroid glands. In addition, females have ovaries and males have testes, which facilitate and regulate reproductive processes.

In Wandas case, all of her glands seem to be working fine except for the pancreas, an organ – about the size of a small chili pepper – that is located near the stomach and small intestine. One portion of the pancreas – the exocrine part – generates digestive enzymes and delivers them into the gastrointestinal tract to enable the breakdown of nutrients. The other portion of the pancreas – the endocrine part – plays a crucially important function by manufacturing a hormone called insulin, which affects nutrients after they have been digested.

Why is insulin so important? The fats, carbohydrates and proteins that are routinely consumed are broken down during digestion into smaller components that can be utilized by the cells in the body. One of the components is glucose, a fuel that provides the energy needed to sustain life. Without glucose in its cells, an animal – feline, canine or human – cannot survive, and it is the job of insulin to regulate the flow of glucose from the blood into the cells.

Too Much Sugar
Diabetes mellitus (the word mellitus comes from the Latin word for honey) results from insufficient production or inadequate effectiveness of insulin. There are two kinds of diabetes – type I and type II.

In type I diabetes (often referred to in humans as juvenile-onset diabetes), the body produces little or no insulin due to an insufficient number of cells capable of producing the vitally important hormone. Treatment for the condition entails a combination of regular exercise, controlled diet and, in almost all cases, insulin therapy that requires daily injections.

In type II diabetes (also referred to in humans as adult-onset diabetes), the pancreas may produce the hormone, but the bodys cells have difficulty making efficient use of it – a phenomenon called insulin resistance. Unlike type I diabetes, this form of the disease can typically be treated with a combination of dietary adjustment, weight control and the use of medications that increase insulin, decrease elevated blood glucose levels and make the cells in the body more responsive to whatever insulin the pancreas is able to produce.

Whereas in dogs type I diabetes is far more common than type II, cats (like humans) are commonly susceptible to both forms of the disorder, according to Richard Goldstein, DVM, a specialist in internal medicine at Cornell Universitys College of Veterinary Medicine.  Most have type I, he says, but type II also occurs very frequently.

Dr. Goldstein also points out that feline diabetes is unique in comparison to canine diabetes because it can be episodic in its occurrence. The disease can be transient in cats, he says. They may be clinically diagnosed with the disease for a while and then go through periods when they are not and dont require insulin. But then, in most cases,  it will come back again.

Likely Patients: Older, Obese
Cats of both sexes are equally susceptible to diabetes, says Dr. Goldstein. Moreover, the condition can occur in any breed and can afflict cats of any age, although it is most frequently observed in older animals – those over age 10 or so – especially those that are obese (weighing 15 pounds or more). Still, he notes, We do see it in kittens occasionally, though very seldom. There may be a genetic influence at work, but we dont know what that is at this point.

A cats lifestyle may increase its susceptibility to diabetes, he points out, but only to the extent that indoor cats tend toward obesity more than outdoor cats, and obesity is known to play a causative role in type II diabetes.

Overweight cats with diabetes tend to lose weight very gradually, says Dr. Goldstein, despite the fact that they have a healthy appetite and continue to eat well. The weight loss may take place over a period of several months. An owner may not notice the change until a visitor who hasnt seen the animal in a while remarks that the cat looks much thinner.

In general, polydipsia, polyuria and weight loss are the prominent signs of diabetes. It is unlikely that, in the early stages of the disease, any other problems will be observed. There will be no change, for example, in an animals defecation habits or the consistency of its stool.

Potential Dangers
Dr. Goldstein urges owners who notice the signs of diabetes to seek veterinary care as soon as possible, since a number of severe disorders may emerge if the condition is allowed to progress.

One such condition is peripheral neuropathy, which results from diabetes-related nerve damage affecting an animals feet and legs. With this condition, an animal will show signs of weakness in its limbs and may begin to stand and walk with its hocks touching the ground, eventually refusing to stand on all fours.

Another, even more perilous condition is diabetic ketoacidosis, which is caused by excessively high levels of blood sugar and the consequent buildup of certain chemicals (ketones) in the blood. Signs of this condition, which is potentially fatal, include vomiting, loss of appetite, profound weakness and low blood pressure. Without prompt infusion of fluids and insulin, an animal with this condition is likely to go into a coma and die.

Treating the Condition
When diabetes is suspected, veterinary examination will aim to confirm that diagnosis and to rule out other possible causes for the typical clinical signs.

The procedure will involve a thorough medical history and physical exam; a urinalysis to check for the presence of glucose and ketones in the animals urine; a search for signs of possible urinary infection; blood tests to determine the concentration of blood glucose, identify any concurrent disorders, and exclude other conditions, such as hyperthyroidism; and a complete blood serum biochemical profile. In some cases, abdominal X-rays or ultrasound imaging will be done to evaluate the health of the pancreas and other internal organs.

Finding the Right Diet
Treatment for a confirmed case of feline diabetes will always entail dietary therapy aimed at restoring or maintaining a cats proper weight and minimizing the consumption of food that might increase its blood glucose levels. In general, says Dr. Goldstein, the best diet for diabetic cats is still under investigation. Diets that are high in protein and fat and low in carbohydrates – what some people call the catkins diet – are very popular today.

Exercise will also be recommended. Says Dr. Goldstein: Obviously, you cant put the animal on a treadmill, but there are a lot of ways you can play with your cat to make sure it gets a good daily workout.

In addition, most – though not all – diabetic cats will require injections of insulin, administered once or twice a day by the owner. A cat will tolerate this very well, he says, as long as its owner learns from a veterinarian or a veterinary technician the proper way to administer the injection.

In most cases, a cat will begin to show improvement almost immediately, and its condition will stabilize within a few days or weeks.

If the cat is an outdoor animal, says Dr. Goldstein, it may be hard to try to change its habits. The most important thing is to make sure it comes around every morning and evening to eat and to get its shots.