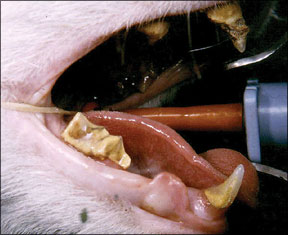 Red and swollen gums, bad breath, declining appetite and weight loss are among the conspicuous indications that your cat is suffering from a disorder centered in its mouth, most likely in its teeth and gums. The animal may not appear to be in pain, but thats because cats are very good at concealing illness, possibly because they dont want to signal a potential predator that they are weakened and are thus vulnerable to attack.

But according to Daniel Carmichael, DVM, a veterinary dentist at

the Veterinary Center of Long Island in West Islip, New York, you can presume that a cat with dental disease is experiencing significant discomfort, since, as he points out, “The sensory nerves that cause humans to experience dental pain are present in the cat as well.” Feline dental problems are not at all uncommon, he says, nothing that approximately 90 percent of all cats will experience some type of dental disease at one time or another. “Dental problems are the most common disease that we see in cats,” he notes.

Born toothless, cats grow two sets of teeth during their lifetimes. The first set is made up of 26 deciduous teeth, otherwise known as milk teeth. These start to appear when a kitten is about four weeks old; about two weeks later, the full complement will be in place. By the time the kitten is about six months old, the deciduous teeth will have fallen out and been replaced by 30 permanent teeth -16 upper and 14 lower. Collectively, the permanent teeth are shaped and arranged in the mouth to accommodate a cats naturally carnivorous habits – catching small prey, ripping it to pieces and chewing it up.

There are four types of teeth: incisors, canines, premolars and molars. Each type differs in shape and size according to its principal predatory function. The incisors, located at the front of the mouth (six upper and six lower), perform the nipping function. Next in line are the canines (two upper and two lower), which are well suited for grasping and puncturing. Behind the canines are the premolars (six upper and four lower), which are built for gripping. And, at the back of the mouth, the molars (two upper and two lower) are used for grinding.

Inside each tooth, explains Dr. Carmichael, is a chamber (the root canal) that contains tissue – made up of blood vessels, lymphatic vessels and nerves – that communicates with the rest of the cats body. The pulp tissue in this chamber is surrounded by a bonelike tissue called dentin, which accounts for the bulk of the tooths structure. And covering the crown of the tooth (its outer surface above the gumline) is a layer of enamel, which protects the dentin.

All of the tissues that constitute a cats tooth are vulnerable to disease or injury, with the following four types of dental disorders comprising the vast majority of cases:

To determine the source of a cats dental problems, a veterinary dentist will place the animal under general anesthesia and, if necessary, take X-rays. The cat will be anesthetized for as long as it takes to clean its teeth, do the examination, and perform any necessary treatment. If extraction is called for, the procedure should take about 45 minutes to an hour.

Unless a tooth is so deteriorated that it is ready to fall out, Dr. Carmichael extracts a tooth through surgical removal. “We lift the gum tissue on the outside of the tooth,” Dr. Carmichael explains, “and use a high-powered, water-cooled drill to remove some of the bone tissue that is holding the tooth in the mouth. Then, with special instruments, we remove the tooth and sew the gums back together with dissolvable sutures.”

In a root-canal procedure, which is significantly more complicated, the goal is to preserve tooth function. The procedure involves surgically accessing the canal, filing and shaping its interior, and filling it.

Shortly after either procedure, says Dr. Carmichael, the cat wakes up and goes home with a few days supply of pain medicine and possibly some antibiotics. Full recovery is usually swift, with the patient behaving normally again within a day or two.

Owners can play a major role in forestalling and perhaps preventing feline dental disease by leaning how to care for their cats teeth from kittenhood on, says Dr. Carmichael. This will entail routine brushing.

Moreover, he points out, the overriding cause of feline dental problems can be traced to the modern cats diet, which tends to produce a superabundance of plaque and tartar. He therefore recommends the use of commercial cat foods that are known to significantly reduce plaque. And he urges owners to make sure that their cats undergo a thorough dental examination at least once a year.