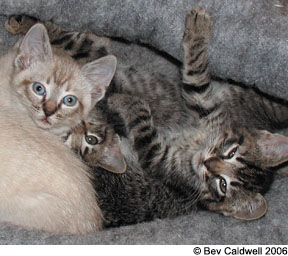 The vast majority of kittens that are born each year – at least those that are delivered into the homes of caring and conscientious cat owners – come into the world with all of their bodily parts intact and all of their vital systems functioning properly.

This may or may not be the case for feral kittens – those that are born in the wild and whose health status at birth cannot be documented. And it is certainly not the case for the estimated two percent to three percent of domestic kittens that are born with an obvious physical defect or harbor a genetically or environmentally induced health disorder that will manifest itself as they mature into adulthood.

Sooner or Later
Because many conditions that are acquired during gestation are cryptic in very young kittens, Drew Noden, PhD, a professor in the Department of Biomedical Sciences at Cornell Universitys College of Veterinary Medicine, uses the term developmental defect, rather than birth defect, to refer to the wide variety of inborn abnormalities that can arise in some individuals.

Often, says Dr. Noden, an inherited defect will not be recognized until a cat has matured. For example, certain urogenital conditions, such as the inability to produce sperm, will reveal themselves only when a cat has reached reproductive age and its owners want to breed the animal.

Indeed, he points out, even the term defect isnt always appropriate, since some features that are considered desirable in some breeds – such as the Manx cats absence of a tail – are viewed as disturbing anomalies in others.

Moreover, Dr. Noden observes, some so-called defects will have little if any negative impact on a cats life. For example, he says, kittens are occasionally born with polydactyly, a genetically acquired presence of extra digits that gives an affected kitten the appearance of having greatly enlarged paws, most frequently on the forelimbs. In other species, says Dr. Noden, this would be a compromising defect, but in domestic cats it doesnt seem to be a problem. These double-pawed cats get along very well.

Dr. Noden has personally observed or seen photos of hundreds of kittens born with bizarre physical deformities – with two faces, for example, or with one eye in the center of the skull. But such extreme grotesqueries are far outnumbered by developmental defects that are more subtle in appearance at birth or are not clinically detectable until later in an animals life.

A Common Defect
Dr. Noden cites spina bifida as a developmental defect – most frequently seen in Manx cats – that owners may overlook during a kittens first days or weeks of life. This condition is a genetically induced disorder in which the spinal column fails to close completely during gestation.

In a newborn kitten with spina bifida, says Dr. Noden, part of the spinal cord is exposed through an open hole in the backbone. In addition to being subject to inevitable degeneration, this exposed section of the spine will be the target of bacterial infection. These kittens, says Dr. Noden, will be alive at birth and may appear normal. They wont be able to move their hind legs, but owners may not see anything unusual – the kitten will be nursing normally because it doesnt need its hind legs in order to suckle.

But a kitten with spina bifida will almost always become infected and die. Statistics on the occurrence of this condition are elusive because, he notes, owners will frequently spot the dead kitten and simply get rid of it without reporting the incident to a veterinarian.

Vulnerable Systems
Over all, says Dr. Noden, the two systems most commonly affected by developmental defects are the axial system – which includes the brain, the skull, the spinal cord and the vertebrae surrounding it – and the cardiovascular system.

Most common among the inherited feline cardiovascular defects are a narrowing of the arteries leading from the heart and structural abnormalities (cardiomyopathies) affecting the heart muscle.

Comparatively frequent developmental defects also involve the urogenital system and the sense organs. Congenital deafness, for example, is frequently observed, says Dr. Noden, as is the emergence later in life of cataracts, a potentially blinding condition in which the lenses of a cats eyes become cloudy or opaque. Many cats – especially Siamese – are born cross-eyed, but they have developed compensatory mechanisms in their visual systems that overcome this potential liability.

What are the most frequent causes of feline developmental defects? Most of them result from either genetic predisposal or environmental influence, says Dr. Noden. In domestic cats, genetic influence is by far the predominant factor.

There are other potential influences. A mother cats infection with the panleukopenia virus, for example, can affect the placenta as well as an embryo. Nutritional deficiencies can also compromise embryonic development, says Dr. Noden, but this problem is rarely seen in domestic cats.

A Difficult Challenge
What should an owner do in the case of a newborn kitten that appears to be hopelessly deformed but is somehow staying alive? It depends on the specific deformity, says Dr. Noden. Often these kittens dont thrive, theyre runted and they soon die – and some families find this situation very difficult to deal with.