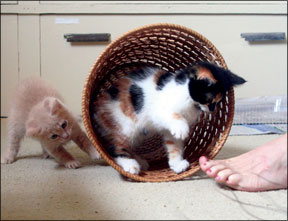 Few things in the life of a cat owner are sweeter than the sight of a newborn kitten, weighing just a few ounces, its eyes tightly shut, nursing contentedly at its mothers nipple. A healthy kitten

will nurse every 20 minutes or so, typically for about eight weeks, during which time its mothers milk will fulfill all of the little animals nutritional needs.

Unfortunately, feline mothers milk can also contain the larvae of intestinal worms ugly and troublesome parasitic creatures that can compromise a kittens health and, if nothing is done to stem their proliferation, may lead to life-threatening illness.

For this reason, the Companion Animal Parasite Council (CAPC), the American Association of Veterinary Parasitologists (AAVP) and other organizations strongly recommend that all newborn kittens be tested for these worms and be given medications that will kill the parasites a process called “deworming” on a routine schedule beginning when they are three weeks of age.

A parasite, in general, is an organism, either simple or complex in structure, that inhabits and finds its nourishment inside another creature, contributing nothing beneficial to its hosts well-being and, indeed, often robbing the infected animal of valuable nutrients or otherwise damaging its health. Cats commonly serve as hosts for these insidious organisms.

Among the most troublesome of feline parasites are certain helminths, worms that inhabit the feline gastrointestinal tract the stomach and intestines. According to Dwight Bowman, DVM, PhD, a professor of parasitology at Cornell Universitys College of Veterinary Medicine, the two helminths most frequently found in cats are roundworms and hookworms. Both are classified as nematodes worms with distinctively cylindrical, unsegmented bodies that are narrowed at each end.

One type of roundworm

Toxocara cati is especially common, says Dr. Bowman. This troublesome creature is known to thrive everywhere in the United States, including urban areas, and can survive in any climate, although, he notes, it tends to do less well in very hot, dry regions. Mature roundworms are not a pretty sight, the typical adult being a white, spaghetti-like creature about three to five inches long.

In most cases of roundworm infection, a cat will harbor dormant larvae in its body for years, possibly throughout its life, without harmful consequences. But if enough of the larvae develop into mature worms and enter the gastrointestinal system, serious vomiting and diarrhea can result. And if 40 or 50 adult worms collect in the intestine, they can create a potentially life-threatening blockage. Roundworm infection is especially dangerous for kittens and for old cats with other health problems, notes Dr. Bowman.

Depending on the species of roundworm, cats can become infected in three different ways: by ingestion of eggs passed in the stool of an infected cat, by eating a rodent that harbors roundworm larvae, or by ingesting worm larvae that are present in the milk of an infected queen. Although the larvae in the mother cat may be dormant, they become active during pregnancy, migrate to the mammary glands and subsequently invade the mothers milk. This transmammary route is common and explains why kittens account for the vast majority of felines at risk for serious worm-caused illness.

Likewise posing a common threat to kittens, whose bodies and immune systems are less well developed than those of adult cats, is hookworm infection. These creatures cause blood to leak from the intestinal lining into the small bowel of the host; if not treated promptly, the resulting blood loss can lead to potentially fatal anemia.

There are several ways in which an uninfected cat can get hookworm parasites into its body: by ingesting the worms larvae in soil or on vegetation that has been contaminated by an infected cats feces, by larvae penetrating its skin, or by eating the tissue of a prey animal such as a mouse in which larval worms can persist in a dormant phase.

A cats physical reaction to the presence of roundworms in its system is often inapparent. In fact, says Dr. Bowman, most owners of adult cats wont know their cats are infected until they are hosting large numbers of fully grown worms. “But thats not to say that a problem doesnt exist,” he notes. “No one would like to have 40 or so five-inch-long worms swimming around in their intestines.”

A cat that is experiencing advanced roundworm infection may develop serious diarrhea, a natural process for ridding the intestines of the irritating worms. Or, toward the same goal, an animal may have frequent bouts of vomiting; this process can be futile, however, since many of the regurgitated worms are apt to be swallowed and, thus, to regain entry into the digestive system. The most severe health threat is an impacted intestinal tract caused by the sheer physical mass of harbored roundworms and the possibility that, as the worms move about, they might cause a perforation of the bowel wall, which can lead to lethal infection or hemorrhage.

The clinical signs of acute hookworm infection are different. The most telling among them is the presence of black, tarry, perhaps bloody feces. In chronic cases, the blood is lost at a slower rate, and no obvious signs of infection may be present, but the cat will nevertheless be anemic.

Kittens are especially vulnerable if infected with either of these parasites, Dr. Bowman notes. “Theyre smaller and their tissues are thinner,” he says.

To test for the presence of roundworm or hookworm infection, a veterinarian will do a fecal flotation test in which a stool sample taken from an animal is mixed in a cylinder with a special solution that causes any eggs that are present in the liquid to float upward and collect on a microscope slide placed on top of the cylinder. A microscopic study of the liquid will then identify the culprit.

All of the deworming drugs can be administered by a cats owner, he notes. The frequency with which a cat should be dewormed will be determined by a veterinarian and will depend largely on an animals age, the apparent severity of worm infection and the animals general health.

Noting that roundworm and hookworm infection should be suspected in all young cats, however, Dr. Bowman recommends fecal examination and deworming if needed as a standard component of any kittens earliest health care.

“I would like to see all veterinarians routinely conduct fecal examinations and, when appropriate, use these medications,” he says.

The major veterinary organizations agree. Following are the recommendations for feline deworming that are currently promoted by CAPC and AAVP:

Every kitten should be tested and dewormed starting at three weeks of age. The deworming should be repeated at eight and 10 weeks and monthly thereafter until the animal is six months of age, after which it should be dewormed on an adult schedule.

All adult cats should be tested and dewormed routinely (every three months or so).

Females should be dewormed prior to nursing and at birthing.

Nursing queens should be tested and dewormed according to the same schedule as that of their offspring.

All newly acquired cats should be dewormed immediately beginning no later than two weeks after being acquired.

The combination of routine fecal flotation testing, deworming and use of preventive medications for roundworms and hookworms, says Dr. Bowman, “will pretty much guarantee prevention of initial infection or reinfection.” He also advises cat owners to “minimize the animals hunting keep it indoors.”

Here are some other steps to reduce the likelihood of worm infection and the problems associated with it:

Control insofar as possible the presence of rodents and other creatures that your cat might prey upon.