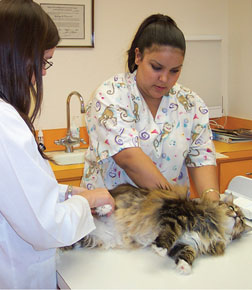 Every single moment of its life, whether fast asleep or wide awake, your cats physical well-being relies on the efficient and nonstop functioning of its endocrine system – an array of small organs (glands) that manufacture life-sustaining chemicals called hormones and deliver them directly into the animals bloodstream. Among the components of this elaborate system, none is more vitally important than the adrenal glands, a pair of tiny, bean-shaped masses of tissue – one on each side of your cats abdomen – situated just in front of its kidneys.

In the great majority of cats, these glands operate efficiently and without letup throughout an animals life. Some cats, however, can experience severe and debilitating illness if the glands produce either too much or too little of their important hormones – conditions known, respectively, as hyperadrenocorticism (Cushings disease) and hypoadrenocorticism (Addisons disease).

Despite the relative rarity of these conditions in felines, cat owners should be aware of their physiologic sources, the clinical signs that suggest their presence and their lethal potential if untreated.

The outer layer (cortex) of each adrenal gland secretes a number of hormones, including glucocorticoids, which regulate the metabolism of proteins, fats and carbohydrates; and mineralocorticoids, which help maintain a proper balance of water, sodium and potassium in a cats body.

Of prime importance among these hormones is a glucocorticoid called cortisol. In addition to its essential role in the metabolism of various nutrients, this chemical contributes to the maintenance of normal blood sugar levels, muscle development and many other functions related to feline tissue growth and repair.

Cortisol is also essential to an animals “fight-or-flight” response. In stressful situations, the adrenal glands rush additional cortisol into the bloodstream. This enables the release of stored energy in the body, which can then be used to cope either with a perceived threat or with a true physical challenge, such as that encountered in surgery or the onset of infection.

A properly balanced amount of circulating cortisol is regulated by another component of the endocrine system – the pituitary gland, a minute oval structure located at the base of a cats brain. The pituitary gland controls the secretion of cortisol by sending a message to the adrenal gland via a hormone of its own, called adrenocorticotropic hormone (ACTH). In a normal animal, the pituitary gland ceases secreting ACTH when a proper level of cortisol has been delivered into an animals system.

Cushings disease (named after the American neurosurgeon who first described this condition in humans about a century ago) occurs when the adrenal cortex secretes an excess of cortisol. According to Deb Zoran, DVM, an associate professor of medicine at Texas A&M Universitys College of Veterinary Medicine and Biological Sciences, “There are two factors that can cause this disorder, and theyre both cancers.”

The more common of the two cancers by far, she explains, is an extremely small, benign tumor (microadenoma) in the pituitary gland, the presence of which causes excessive secretion of ACTH. This in turn signals the adrenal glands to produce more cortisol – a condition known as “pituitary-dependent Cushings disease,” which accounts for the majority of cases. The remainder are attributable to a cancerous growth in one or both of the adrenal glands themselves, their progressive enlargement and the resulting increase in cortisol secretion.

Due to cortisols role in countless bodily functions, Cushings disease may have a correspondingly vast range of serious implications, which tend to develop over a period of months or years. The condition can, for example, compromise a cats ability to metabolize nutrients, diminish the efficiency of its cardiovascular system, reduce its muscle strength, and interfere with normal blood-clotting function and the bodys ability to ward off infection.

The most frequently observed clinical signs of the disease are excessive drinking and urination. And because of the effect that excess cortisol has on insulin, an animal with this condition will tend to have an increasingly big appetite. It will often develop episodes of panting, and due to weakened muscles, it may be prone to falling. A telltale sign of advanced Cushings disease, says Dr. Zoran, is the development of a pot belly, a consequence of muscle weakness and a reduced ability to break down fat. And a cat with advanced Cushings disease is likely to develop patchy hair loss (alopecia).

Cats 10 years of age and older are at elevated risk for Cushings disease, and the majority of them are female. All breeds appear to be equally at risk for the disorder.

Addisons disease (named after the 19th century British physician who first described the condition in humans) is a comparatively rare feline disorder marked by the inadequate secretion of glucocorticoids and, in some cases, mineralocorticoids as well. When this hormone deficiency does occur, it usually results from destruction of adrenal cortex tissue by an animals immune system. The condition has been associated with, for example, systemic infections and cancer of the lymphatic system. It also has been associated with the sudden withdrawal of a cat from steroid medication.

The clinical signs, which frequently mimic those of other conditions, such as pancreatic or renal disease, include lethargy, weakness, poor appetite and weight loss, occasional vomiting and low body temperature. All feline breeds are equally at risk, but the condition is most frequently observed in young cats – those ranging between four and six years of age.

Diagnosing either Cushings disease or Addisons disease entails a variety of measures that are often aimed toward ruling out the presence of other conditions that have similar clinical signs. Diagnosis typically includes a complete blood count, blood chemistry profile and urinalysis; chest and abdominal X-rays or other imaging techniques; and, of course, the measurement of the cortisol concentration in a cats blood. The most dependable screening method for both hyper- and hypoadrenocorticism, however, is an ACTH stimulation test, which assesses the response of the adrenal glands to a test dose of the pituitary hormone.

If Cushings disease is conclusively diagnosed, says Dr. Zoran, treatment depends on which of the two disease types is identified. “If the animal has pituitary-dependent Cushings disease,” she says, “we dont radiate or remove the tiny tumor in the pituitary gland, because it is inaccessible and the adverse consequences of those procedures are dire. So we have to use drugs that act not on the pituitary, but on the adrenal gland. These drugs selectively destroy that part of the adrenal gland that is producing too much cortisol. We cant cure this condition, so our goal is to manage it.”

While chances are good that pituitary-dependent Cushings disease can be successfully managed and an afflicted cats life may be significantly extended, the same cannot be said for cases involving malignant tumors originating in the adrenal glands.

“Malignant adrenal tumors typically do not respond reliably to chemotherapy or radiation, and they require such high doses of the drugs that the resulting side effects are unacceptable,” says Dr. Zoran. “The preferred way to help an animal with that type of tumor is to surgically remove it. However, surgical removal will only work if the cancer has not already spread to other parts of the body.”

Treatment for Addisons disease will depend on whether the disorders onset has been rapid or whether the clinical signs have become apparent over an extended period of time. In acute cases, treatment is likely to include intravenous fluid therapy and the replacement of glucocorticoids and mineralocorticoids. In chronic cases, cats may be additionally treated with salt supplementation.

The prognosis for either condition depends largely on how early it is diagnosed and treatment is initiated. Neither Cushings disease nor Addisons disease is preventable, and neither can ultimately be cured. After the removal of their adrenal glands, cats diagnosed with Cushings disease must receive medications for the rest of their lives and be reevaluated by a veterinarian several times each year. Those diagnosed with Addisons disease must also be given medications for life, and their food and water intake must be carefully monitored.