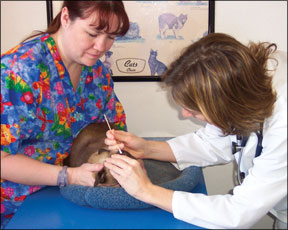 Your cats eyes, like yours, are delicate structures made up of various components -the cornea, pupil, iris, lens, retina and so forth – each of which plays a role in enabling the animals keen vision. While the feline eye is generally sturdy and resistant to injuries and disease, a wide variety of disorders, such as glaucoma and cataracts, can impair a cats vision and even, in some cases,

According to Thomas Kern, DVM, an associate professor of ophthalmology at Cornell Universitys College of Veterinary Medicine, the most common of all feline eye disorders is conjunctivitis, an inflammation of the thin mucous membrane (conjunctiva) that lines the inner surface of the eyelids and coats the outer surface of the eyeball. “Among primary-care veterinarians at a typical cat clinic,” he says, “conjunctivitis is probably the most frequently seen eye disorder in cats of all ages, and it is certainly the most common among younger cats. In any case, most cats will experience at least a mild episode of conjunctivitis at some point in their lives.”

The conjunctiva serves several purposes, explains Dr. Kern. Most importantly, this slippery membrane provides the eyeball with lubrication by functioning as a conduit for tears that fall onto the surface of the eye and are distributed by “the blinking phenomenon,” as he calls it. Furthermore, the conjunctiva harbors certain antibodies that may help an animal ward off some eye infections. But several microorganisms that cats commonly carry can trigger an inflammatory immune response that is responsible for the great majority of feline conjunctivitis cases.

The clinical signs of the condition can be evident in either one or both eyes and will typically be observed as well in the third eyelid – the membrane positioned in the inner corner of a cats eye, between the lower eyelid and the eyeball. The signs include squinting, frequent blinking and the presence of a discharge that can, depending on the cause of the conjunctivitis, be either colorless and watery or thick and dark-colored. The condition also tends to cause the conjunctiva and third eyelid to become swollen and red.

Environmental irritants, such as dust or airborne chemical substances, can cause conjunctivitis, as can exposure to certain outdoor plants – a condition called allergic conjunctivitis. “But these potential causes,” says Dr. Kern, “are not much of an issue. The most common cause by far is infection with either herpesvirus or calicivirus or with one of two bacteria – chlamydia or mycoplasma.” Conjunctivitis, he adds, is also relatively common in cats whose immune systems have been compromised by infection with feline immunodeficiency virus (FIV) or feline leukemia virus (FeLV).

All cats, regardless of breed or gender, are susceptible to conjunctivitis. The condition is not heritable, but age is clearly a determining factor. “Although conjunctivitis can occur in older cats, this is an infection that occurs primarily in young animals – not kittens, but very young and young adult cats,” says Dr. Kern, “and it is most prevalent in catteries and other multiple-cat environments. In the course of their development, young cats may pick up a virus or a bacterium from an older cat. And, like kids, they play together and pass it back and forth. Sooner or later, they all get it, and it resolves either with or without treatment. At that point, they will typically develop an immunity and they may never get it again.”

An exception, he notes, is infection with herpesvirus. “These cats,” says Dr. Kern, “will have a mild case of conjunctivitis and will get over it, but they will harbor the virus in their tissues for their whole lifetimes, and the condition will recur periodically, the way that cold sores appear from time to time in humans who carry herpesvirus.” Infection with this virus can also cause inflammation and severe ulceration of the cornea (keratitis), a condition that can lead to blindness. Keratitis is most likely to occur in very young kittens before or shortly after their eyelids separate.

Cats that have conjunctivitis usually get over the disorder without any serious consequences. Says Dr. Kern: “Most veterinarians will see a cat once or twice and prescribe the use of antibiotic eyedrops or an ointment three or four times a day for two to three weeks, by which time the discharge and other signs should disappear. If the cornea is involved, well probably assume that were dealing with herpesvirus, so well use topical antiviral drugs along with antibiotics. We wont be able to cure it, but we will try to eliminate the infection from the surface of the eye and let it heal.” In most cases, he points out, conjunctivitis will self-resolve with no medication at all. However, he advises owners to seek veterinary care if a cats apparent eye discomfort and discharge persist for longer than a week or so. At that point, prompt evaluation is highly recommended, he says.