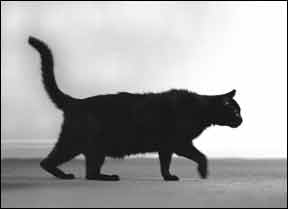 If you ever try to move around your home very, very quietly — to avoid waking a slumbering child, for example — you may be in the habit of walking on your tiptoes. Normally, however, you will employ what’s termed a “plantigrade” stance. That is to say, you’ll stand and walk with the entire sole of your foot touching the floor.

Cats are different from you and your fellow humans in this respect. Unless they’ve suffered an injury or are afflicted with a physical condition that makes it painful or physically impossible for them to do otherwise, they will, by nature, walk on the front part of their feet.

Notable among the feline disorders whose presence is signaled by a cat’s inability or unwillingness to walk on its toes is a condition called diabetic neuropathy. This condition is characterized by progressive muscle weakness, especially in an affected animal’s hind limbs, and its habit of walking on the back part of its legs — the hocks — rather than just on its toes.

A Frequent Complaint. Diabetic neuropathy occurs as a consequence of diabetes mellitus, explains Marnie FitzMaurice, VMD, PhD, an instructor in the Department of Biomedical Sciences at Cornell University’s College of Veterinary Medicine. “About 10 percent of cats with diabetes mellitus develop diabetic neuropathy to the extent that it becomes alarming to a cat’s owner and is clinically recognizable at a veterinary clinic,” she says.

“There are probably many more diabetic cats afflicted in a less severe way. But since cats don’t usually complain if something is bothering them, there may actually be a lot of mild cases of this disorder that are undiagnosed, explains Dr. FitzMaurice.

At the Source. The source of the disorder — feline diabetes — may be generally described as a disease resulting from the insufficient production or improper utilization of insulin, a hormone produced by the pancreas that’s needed to regulate the flow of glucose from circulating blood into the body’s cells.

Without glucose in its cells, an animal — feline or otherwise — cannot survive, since this sugar provides the energy needed to sustain life. However, an excess of glucose in the bloodstream — a condition called hyperglycemia — can ultimately prove to be lethal.

There are two kinds of feline diabetes: insulin dependent and non-insulin dependent. These conditions correlate roughly to the categories of the disease in humans that are known as type I and type II diabetes.

– In type I diabetes (also referred to in humans as juvenile-onset diabetes), the body produces little or no insulin due to an insufficient number of pancreatic cells capable of performing this complex task. Treatment for the condition typically involves a carefully controlled diet and, in almost all cases, insulin therapy that requires daily injections of the hormone.

– In type II diabetes (also referred to in humans as adult-onset diabetes), the pancreas may produce normal amounts of insulin, but the body’s cells have difficulty making efficient use of the hormone — a phenomenon called insulin resistance. This form of the disease can typically be treated with a combination of dietary adjustment, weight control and the use of insulin therapy or medications that increase insulin secretion.

A Complex Process. Felines, like humans, are susceptible to both forms of the disease, although type II is diagnosed far more frequently than type I in cats. However, says Dr. FitzMaurice, diabetic neuropathy, which results from high blood sugar, occurs in both types of diabetes.

She describes what she terms “a pretty complicated mechanism” as follows: “High levels of sugar in the blood affect a number of metabolic pathways, resulting in dysfunction of the neurons and the cells — called Schwann cells — that support the neurons. These cells provide a sheath made of a substance called myelin that surrounds the neurons and helps them to function. This myelin sheath breaks down as a result of high blood sugar levels, and the nerves cannot work properly. In addition, diabetes causes constriction of blood vessels, which compromises blood flow to the nerves.”

In diabetic neuropathy, explains Dr. FitzMaurice, the dysfunction resulting from nerve damage is generally symmetric, manifesting itself in both hind legs. “One of the first signs a pet owner will usually notice,” she says, “is the plantigrade stance, with the affected cat walking flat on its hocks. This is the classic appearance. The cat may also have generalized muscle weakness, usually noticeable at first in the hind legs, and the loss of muscle mass may eventually become visible.”

Disease Progression. Although the rate at which the neuropathy progresses is variable, debilitating signs will usually become more severe over a period of weeks or months, she notes, to the point at which a cat may lose its ability to run and jump. The condition may gradually begin to affect the front limbs as well. “The greatest risk factor,” says Dr. FitzMaurice, “is the degree of hyperglycemia that is present due to the cat’s diabetic condition.”

At present, she notes, there is no specific medical therapy for diabetic neuropathy. “The only way in which the condition can be relieved,” she says, “is to treat the underlying diabetic condition. All you can do is to try to get the diabetes under control to the extent possible, although treating the diabetes may not completely reverse the neuropathy.”