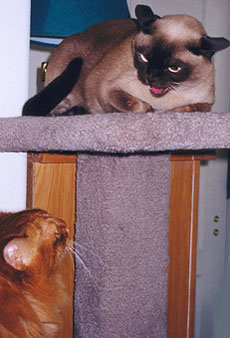 Rare in solo, indoor-only house cats, this dreaded disease sends chills down the backs of kennel and cattery owners.  Its feline infectious peritonitis (FIP); and its lethal and incurable.

FIP is caused by common strains of coronavirus. Luckily, most cats dont develop FIP from being exposed to feline coronavirus (FCoV). Rather, the majority of exposed cats will show no signs of disease or only minimal ones, including a mild upper respiratory disease with sneezing, water eyes, a runny nose or a mild intestinal problem. Some cats will shed the virus for a brief time, but after several months, most will eliminate it and never be bothered again, unless they become reinfected.

About 10 to 15 percent of cats, though, cant rid themselves of the virus and become carriers – they may continue to infect cats around them with their saliva and feces.

Most of these carriers arent sick, although some develop chronic diarrhea,
The infection is fatal, however, for another 10 percent or so of infected cats. The reason is incompletely understood, says James Richards, DVM, director of the Cornell Feline Health Center at Cornell Universitys College of Veterinary Medicine, but its probably a combination of persistent infection and mutation of the virus. Some cats cant mount an effective immune response when exposed to FCoV because they may too young, too old, too stressed or ill from some other disease to have an adequate immune response.

Coronaviruses commonly mutate, Dr. Richards explains, and may do so more often in persistently infected cats.

FIP develops when a usually harmless strain of FCoV mutates in the cat in a way that gives the virus the ability to replicate itself in some of the cats white cells. When the immune system mounts a defense against the invaded white cells, which are themselves infection-fighting cells, the immune system ends up damaging its own protective cells and tissues, says Dr. Richards. The result is an intense inflammatory reaction in the tissues where the virus-infected cells reside, which causes damage to multiple systems at once and ultimately leads to death.

Cats in multiple cat environments are at much higher risk for FCoV infection than solo cats because they are more likely to be exposed to the feces of infected cats, either via shared litters or by bits of feces on shoes, clothing or objects. Thats why the rate of FIP is much higher in cats that live with lots of other cats. Only about one in 5,000 housecats that live with no other cats or just one other cat die from FIP; about 5 percent of cats – and sometimes more – in multiple cat residences succumb to it.

Signs of FIP
The disease usually develops as dry or wet or somewhere in between. With dry or noneffusive FIP, the cat typically develops the vague signs of loss of appetite, loss of weight, dull coat, and a yellowing on the inside of the eyelids (jaundice). The nose may pale and the iris may change color, often turning brownish; some cats eyes will bleed on the inside or develop white spots on their outer layer. About 15 percent of these cats also develop neurological problems, such as imbalance, head tremors and seizures.

Other cats develop wet or effusive FIP, which is caused by damaged and leaking blood vessels in the abdomen or chest. The abdomen or chest fills with fluid; breathing may be difficult if the fluids have accumulated in the chest.

While the clinical signs of dry FIP tend to worsen gradually over several weeks, wet FIP tends to develop much more rapidly, according to Dr. Richards.

Diagnosing FIP
Although FIP is one of the most common causes of an unexplained fever, the disease is often difficult to diagnose.  Its clinical signs (see sidebar at right) can be caused by a number of other conditions and theres no single, clear-cut test diagnose it, says Dr. Richards.

Veterinarians can determine rather easily whether a cat has been exposed to FCoV by performing a blood test that detects coronavirus antibodies in the cat, but a positive result just means the cats been exposed and has developed antibodies. Its very important that cats with antibody arent automatically diagnosed as having FIP, says Dr. Richards, because the vast majority dont. A positive test result, by and of itself, is pretty meaningless. A negative test result isnt definitive either. It could be too early in the infection to detect antibodies, for example, or the cat may be unable to make antibodies against the virus. And furthermore, the cats antibody level may vary considerably and some FCoV antibody tests arent even that reliable, Richards points out.

To make a FIP diagnosis, the veterinarian will conduct a host of tests to see if an FIP profile emerges. He or she not only will assess antibody levels but also liver and kidney function, blood counts, and if fluid is present, a fluid analysis. Several newer tests can detect parts of the virus genetic material, rather than the antibodies against it, but they cant distinguish between a harmless FCoV and a mutated form that causes FIP.

However, if the virus is detected in fluids using these DNA-based tests, it does strongly indicate FIP.

Combining the cats history with the test results, the veterinarian will determine whether the FIP profile is strong enough to make a probable diagnosis.

Treating FIP
There is no cure for FIP and unfortunately, cats with wet FIP usually die within a few days or perhaps weeks.  Cats with dry FIP, however, may temporarily respond to supportive care. Cats that have appetites and no neurological problems or anemia may survive for months with treatment.

The goal of therapy is to suppress the immune response – usually with corticosteroids, such as prednisolone – which will make the cat feel better and stimulate his appetite.

The veterinarian also will likely prescribe antibiotics to prevent secondary infections, vitamins and antioxidants to boost the cats nutrition status, and low doses of aspirin for pain and inflammation. Current anti-viral medications are rarely effective and too toxic to use. Supportive care also may include draining accumulated fluids, fluids to correct dehydration, and a blood transfusion if severe anemia is present. Eye medications may also be prescribed in the cat suffering from eye problems.

If the cat becomes clearly distressed, however, euthanasia is the most humane approach, says Dr. Richards.

After Losing a Cat to FIP
If there was only one cat in the house, and you lost her to FIP, its wise to wait at least a month before bringing another cat into the household to be sure the virus, which can survive for several weeks, has died out. To clean up a household, a very effective cleansing solution is four ounces of household bleach to a gallon of water.

If you have other cats, though, check with your veterinarian about testing them for virus antibodies or vaccinating them. The vaccine for FIP (Primucell FIP, Pfizer Animal Health) has been shown in some studies to protect up to 50 to 75 percent of vaccinated cats, but it is not effective in cats previously exposed to FCoV. Also, veterinarians dont currently know how long immunity lasts, and some are concerned that the vaccine will make future testing ambiguous since the vaccine triggers antibody production against the virus. Research also shows that the vaccine appears to make no difference in catteries where FIP has been endemic, probably since kittens get infected before they are old enough to respond to the vaccine.

To reduce the likelihood of FCoV infection in multiple-cat households, litter boxes should be cleaned often and separated from food and water. There should be as many litter boxes as there are cats- plus one. If possible, cats should be maintained in small, separate groups. The more cats in a household, the greater the chance of coronavirus infection, and the more likely somebody will get FIP, says Richards.  When lots of cats are housed together in groups, Im never surprised when FIP rears its ugly head.