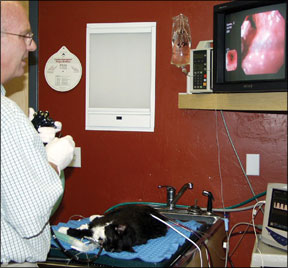 The feline lymphatic system an exquisitely structured arrangement of internal organs and tissues directly or indirectly influences every aspect of a cats physical existence. For this reason, owners should

have a basic understanding of its components and its diverse vital functions. Of even greater importance, says Margaret McEntee, DVM, an associate professor of oncology at Cornell Universitys College of Veterinary Medicine, owners should be equipped to recognize the signs that suggest the presence of feline lymphoma, a potentially deadly cancer of the lymphatic system that can assault many areas of a cats body, including its liver, gastrointestinal system, spleen and skin.

Lymphoma is the most frequently observed of all feline cancers, says Dr. McEntee even more common than mammary cancer. At the Cornell University Hospital for Animals (CUHA), she notes, “We see about 40 cats or so each year that have this disease, and the incidence may be even higher than that at other veterinary clinics.”

Broadly speaking, the feline lymphatic system may be viewed as a complex network of minute vessels that transport life-sustaining substances throughout a cats body and play an important role in preventing the circulation of harmful substances.

The organs generally regarded as components of the lymphatic system are the thymus (a gland in which immune cells are created and in newborn and young cats certain immune functions are carried out); and the spleen (which, among other things, filters abnormal cells from the blood). Also considered to be components of the lymphatic system are the bone marrow (the tissue in bone cavities that produces red and white blood cells); and what veterinarians refer to as “gut-associated” lymphoid tissue, which lines the surface of various areas of a cats body and prevents their exposure to infectious agents.

However, the distinctive and most pertinently defining characteristic of the lymphatic systems anatomy, according to Dr. McEntee, has to do with its role in transporting a vitally necessary fluid, lymph, throughout a cats body. Circulation of this milky fluid is achieved by means of a network of tiny, interlaced ducts (lymphatic vessels) that connect at various points in the body with small, specialized collections of tissue called lymph nodes.

Some lymph nodes small, bean-shaped structures are situated deep within a cats body. Other nodes, called peripheral lymph nodes, are positioned at specific areas near the surface of the body on the neck, in the “armpit” and groin, and behind the knees.

Included among the functions performed by the lymph fluid, the vessels that transport it and the lymph nodes are: the collection of metabolic waste products; the absorption of fat from the intestinal tract; the removal of tissue debris from the body; and as an important player in an animals immune system the filtering out of bacteria, viruses and other infectious agents. The lymphatic system, Dr. McEntee notes, also helps transport fluids that have leaked out of the blood stream and into the spaces between tissues or organs and back into the veins of an animals circulatory system.

Because of the lymphatic systems complexity and its presence in virtually all parts of a cats anatomy, it is subject to several serious disorders. The lymph nodes may become enlarged, for example, as the result of infection or chronic inflammation or even in reaction to a vaccination. Physical trauma or infection can cause the vessels to become inflamed. And dilation (or blockage) of these conduits may occur due to pressure exerted by a foreign body.

Of all lymphatic disorders, however, lymphoma is, according to Dr. McEntee, the most common by far. Also known as lymphosarcoma, this disease is a malignant cancer typically affecting the entire lymphatic system, which can involve the lymph nodes and also the lymphoid cells that are distributed throughout the body in the chest cavity, kidneys, liver, stomach, intestines, brain and spinal cord. The disease is typically classified according to the area or areas of the body that are affected.

Currently, says Dr. McEntee, feline lymphoma is most often seen in the gastrointestinal tract, whereas years ago back in the 1980s the mediastinal and multicentric forms were more common. But the occurrence of mediastinal and multicentric lymphoma is closely linked to infection with feline leukemia virus (FeLV) or, to a lesser extent, with feline immunodeficiency virus (FIV). These types of feline lymphoma are less frequently seen today, presumably due to the widespread use of FeLV vaccines and other control measures that help protect against infection.

Since most feline lymphoma these days develops in the gastrointestinal tract, it is rare for the disease to be marked by the emergence of obviously swollen and easily palpable peripheral lymph nodes. Rather, the first signs will typically include such distressing problems as weight loss, poor appetite and lethargy, which are vague and may be indicative of many other ailments.

If lymphoma is suspected, however, a standard “work-up” is used to either confirm or exclude a tentative diagnosis of the disease. This will include a complete blood cell count, chemistry panel and urinalysis plus chest X-rays, microscopic analysis of lymph node tissue samples and ultrasound examination of an animals abdomen to see whether its liver or spleen common sites for lymphoma involvement is enlarged.

Treatment for a cat that has been diagnosed with lymphoma relies primarily and in almost all cases on chemotherapy; in some instances, an affected animal may undergo surgery for the removal of a mass in the abdomen, and radiation therapy is used in select cases, such as lymphoma in the nasal cavity.

Unfortunately, says Dr. McEntee, “We dont usually think of feline lymphoma as a curable condition, although some cats may have long-term survival and eventually die of another disease. With chemotherapy, which many cats are on for the remainder of their lives, survival time will typically be on the order of six months, although there are exceptions. Some cats may survive for a year or more and may have periods when they are not receiving chemotherapy. Cats with low-grade lymphoma of the gastrointestinal tract typically have long-term survival.”

While feline lymphoma cannot be prevented, she notes, the chances that a cat will develop the disease may be reduced through measures that prevent infection with FeLV and FIV, and also by making sure it does not live in an environment contaminated with tobacco smoke. Since early detection of the disease may improve an animals chances for survival, Dr. McEntee also recommends that all cats seven years of age and older undergo twice-yearly physical examinations that include blood and blood chemistry testing and thorough palpation of the body, which could yield signs of early-stage lymphoma.