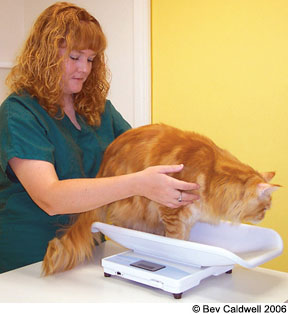 About 25 percent of the blood that enters your cats circulatory system with each heartbeat travels directly to the kidneys. Given the relentless and crucially important burden that these organs bear, their well-being is essential to your cats health.

Unfortunately, feline kidneys – like their human counterparts – are susceptible to a wide range of life-threatening disorders. Indeed, kidney (renal) disorders are major causes of feline disease and death. Especially among cats that are seven years of age and older, taken as a whole they are one of the two or three most frequently observed causes of severe illness.

The good news, notes James Flanders, DVM, an associate professor of clinical sciences at Cornell Universitys College of Veterinary Medicine, is that recent advances in such sophisticated procedures as organ transplantation and hemodialysis are extending the lives of cats that, in the past, would surely have died of acute or chronic forms of kidney disease.

Although somewhat simpler in structure and, of course, quite a bit smaller, your cats kidneys are virtually identical to human kidneys in both form and function. Located behind the rib cage, one on each side of the animals spine, these small, bean-shaped organs play a central role in almost all feline bodily processes. They help to control blood pressure and regulate the amount and chemical consistency of fluid in the bloodstream. They produce a variety of vitally needed hormones. And they contribute to the production of red blood cells.

Perhaps most important is the role that the kidneys play in removing metabolic waste such as urea, mineral salts and toxins from the blood. This is accomplished by kidney tissue containing hundreds of thousands of tiny filtration units called nephrons. When waste-laden blood enters the kidneys through the renal artery, it moves through progressively smaller vessels until it reaches these minuscule filters. The cleansed blood – about 95 percent of the total fluid volume – then recirculates back to the heart for yet another round trip through the body. Meanwhile, the remaining fluid, containing the waste products, is passed along as urine from the kidney to the bladder and eventually excreted.

What Can Go Awry?

When the kidneys and their elegant filtering system malfunction, potentially toxic wastes start to accumulate in the recirculating bloodstream. If a proper balance of water and electrolytes (such as sodium and potassium) is not maintained, serious complications may affect other organs.

A high risk for certain forms of kidney disease is inherited. Some Persians and related breeds are genetically predisposed to polycystic kidney disease, for example. But the great majority of cases are acquired, and they fall into two broad categories: acute renal failure and chronic renal failure.

The essential difference between the two is that acute renal failure is a severe condition with a relatively sudden onset whose clinical signs become apparent over a period of a week or a month, while chronic renal failure is a disease that has been present for a long time, possibly for several years.

Common causes of acute renal failure include blockages that interfere with the flow of blood to the kidney or the flow of urine from it. Most common of all causes, however, is ingestion of substances that are toxic to the kidneys, such as antifreeze, pesticides, cleaning fluids and certain human medications. Consuming a single tablet of the popular anti-inflammatory drug ibuprofen, for example, can precipitate a severe and quite possibly fatal episode of acute renal failure in a cat.

If diagnosed at its earliest stage and treated promptly, kidney damage resulting from acute renal failure is potentially reversible. Indeed, when treatment is promptly administered, the prognosis for full recovery may be excellent, and a rescued cat often can go on to enjoy a normal life span.

The same cannot be said for chronic renal failure, which is an incurable condition that mainly afflicts middle-aged and older cats. It occurs when 75 percent or more of functional kidney tissue – which contains the nephrons – has been destroyed and replaced by scar tissue. Unlike acute renal failure, the onset and progression of this condition – called interstitial nephritis – is gradual, extending over months or years.

The exact causes of this disorder are unknown, although the debilitating loss of healthy kidney tissue may be a natural endpoint for several readily recognizable conditions, ranging from a variety of kidney infections, inflammations and obstructions to dermatitis and advanced dental disease.

In any case, by the time a cat is showing signs of chronic renal failure, the underlying cause is for the most part irrelevant, since the loss of healthy kidney tissue will preclude effective treatment of that cause, whatever it may have been. In some cases, little can be done to prolong the life of a cat diagnosed with late-stage chronic renal failure. On the other hand, it is quite common nowadays – thanks to innovative medical and surgical procedures – for a cat to live on for one to three years or even longer following diagnosis.

The early signs of a failing kidney include a marked increase in water consumption (polydipsia) and in urination (polyuria), weight loss, apparent decline in appetite, and, in some cases, occasional vomiting. If these signs are observed, the owner should seek immediate veterinary consultation.

If kidney disease is suspected, a veterinarian will first of all perform a complete blood count (CBC), serum chemistry and a urinalysis. The serum chemistry test will detect the blood levels of substances that would normally be shed in the urine – especially blood urea nitrogen (BUN) and creatinine. Elevated levels will indicate that the kidneys are not adequately filtering metabolic wastes. The urinalysis will provide additional information on the presence and extent of kidney damage and whether an infection might be responsible for the diminished kidney performance. Further tests – involving X-rays, ultrasound and even a kidney tissue biopsy – may be required to confirm a tentative diagnosis of renal failure.

Treatment for renal failure has traditionally been determined, says Dr. Flanders, by the type of disorder causing the condition – if, that is, the disorder can be identified – and the extent of kidney damage sustained. Acute renal failure, of course, must be given emergency treatment. If caused by any type of urinary tract blockage, the obstruction must be removed immediately. The use of any suspect medication must cease, and intravenous solution infusions must be administered without delay to correct fluid and electrolyte imbalances in the blood.

The vast majority of chronic renal failure cases, however, will be addressed with what is termed “conservative medical management,” the objective of which is to provide palliative therapy employing fluid therapy, various medications and diet modification that may improve the quality of life and slow the progression of kidney dysfunction. Diet modification usually calls for feeding an affected cat a specially formulated food – either commercial or home-prepared – that is low in phosphorous, rich in high-quality proteins (cooked eggs, liver, turkey and so forth), and sometimes enriched with vitamin D and omega-3 fatty acids.

In recent years, notes Dr. Flanders, significant progress has been made in two treatment areas. One is hemodialysis – a procedure that removes harmful substances from the blood that the kidneys would routinely remove if they were functioning normally.

The other area of notable progress is in feline kidney transplantation techniques, which entail the surgical implantation of a healthy kidney from a donor cat – an animal that, says Dr. Flanders, will be able to survive “just fine” with its one remaining kidney and will be adopted by the recipient cats family. This procedure has become so refined in recent years that survival rates are now as high as 80 percent at some veterinary centers, and owners can expect their animals to live one to three years or longer following a kidney transplant.

Dr. Flanders points out, however, that these sophisticated procedures are not appropriate for all ailing cats and that they are available in only a few veterinary hospitals or specialty clinics in the U.S. Transplants are also costly, ranging somewhere between $5,000 and $10,000 for the procedure itself plus the expense of immunosuppressive drug therapy for the remainder of the organ recipients life.