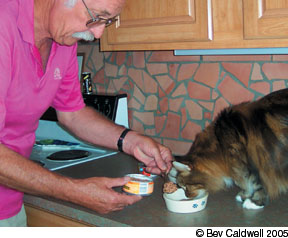 For cats diagnosed with diabetes, simple changes in the kind of food they eat may end insulin-dependence. Diabetes mellitus, often referred to as sugar diabetes, is a disease of the endocrine (glandular) system affecting people, dogs and cats. About one in 200 cats develops diabetes, says Deborah S. Greco, DVM, PhD, staff endocrinologist at the Animal Medical Center in New York and board-certified by the American College of Veterinary Internal Medicine.

Type I diabetes is caused by the inability of the pancreas to produce adequate amounts of the hormone insulin. Type II diabetes is more common and is characterized by the bodys inability to use insulin at the cellular level. Diabetic cats develop high blood sugar levels resulting in excessive urination and thirst. Left untreated, diabetic cats usually lose their appetite, consequently lose weight, and may develop a life-threatening condition called diabetic ketoacidosis. (See related article in September 2005 issue of CatWatch.)

Although the exact cause of diabetes is unknown, culprits include genetic predisposition, pancreatic disease, hormonal imbalances and obesity. Diabetes is caused by too much fat, says Dr. Greco. Forty-five percent of all cats between the ages of eight and 12 are overweight or obese.

Unlike dogs, which are omnivores, cats are obligate carnivores, which means that they cant sustain life without nutrients that come from animal sources. Cats cant become vegetarians, says Dr. Greco. Cats utilize protein and fat for energy production and in the wild their diet consists of prey such as rodents, birds and insects. If you remove the 60 percent water content, what remains is about 45 percent protein, 40 percent fat and about three to five percent carbohydrates, says Dr. Greco. Animal tissue is low-carbohydrate.

Many owners feed their cats dry cat food, either exclusively or in combination with canned food. Its inexpensive, convenient, less likely to spoil if left in the open, can be free-fed and is often recommended by veterinarians as the diet of choice. But dry cat food can contain up to 50 percent carbohydrates from rice, corn, wheat and soy – ingredients that are unnecessary in high quantities in a cats diet. The addition of grains in cat food is a less expensive way to provide adequate calories, and carbohydrates are necessary for the process of manufacturing dry cat foods. But high levels of carbohydrates dilute the protein and can cause a cat to consume more. The carbohydrate content is the problem with dry food, says Dr. Greco. The cat just eats and eats.

Make a Change
Typically, high fiber diets have been recommended for diabetic cats. But new research points to a diet consisting of primarily or exclusively canned cat food, which is higher in protein and fat and lower in carbohydrates than dry cat food. Its also more comparable to the diet a cat would eat if guided by his own instincts. According to Grecos study, 68 percent of type II diabetic cats fed exclusively canned cat food went off insulin. The diabetes has not gone away, says Dr. Greco, but the cat becomes non-insulin dependent via diet.

Canned food also offers variety to your cat, which can help reduce food addictions and finicky behavior at mealtimes. Canned food increases water intake, which promotes kidney and bladder health. Cats fed a high-protein, low-carbohydrate diet revert to their natural instincts. They get back their energy, stalk, climb and run, says Dr. Greco. You may also find your high-protein fed cat becoming more nocturnal and more likely to wake you up if hungry. Youre better off feeding your cat at night than in the morning, advises Dr. Greco.

For the cat owner looking to wean a cat off dry food, finding the right mix may not be easy. Even some canned foods contain excessive carbohydrates – and the carbohydrate content may not be one of the ingredients listed on the label. Savvy cat owners can estimate the amount of carbohydrates contained in the food, however, by adding up the water, protein, fat and ash contents and subtracting from the 100-percent guaranteed analysis. Youll have a rough guideline of the carbohydrate content, says Lisa Pierson, DVM, who provides consultations on a variety of feline medicine and behavior issues in California.

As with most things in life, an ounce of diabetes prevention is worth a pound of cure. Keeping your cats weight at an acceptable level is step one. Dont let your cats get fat, regardless of what you are feeding them, says Dr. Greco. This is especially true after neutering, when the energy requirements can drop by as much as 40 percent. The time to start feeding them an appropriate diet is when they are kittens, says Dr. Greco.