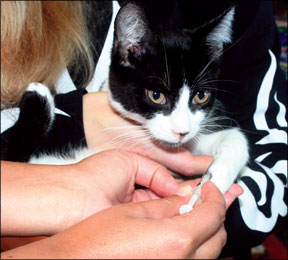 The principal function of feline blood, like that of human blood, is to transport oxygen and nutrients throughout a cats body tissues and to carry carbon dioxide and various waste materials away from them. But this is by no means the only vitally necessary role that this rich, red fluid plays. Typically accounting for five percent or so of a cats total body weight, the blood is a key contributor to many

other processes, such as cell development, tissue repair and the warding off of infection.

The components of a cats blood are virtually identical to those of human blood, notes Marjory Brooks, DVM, associate director of the Comparative Coagulation Laboratory at Cornell Universitys College of Veterinary Medicine. These components include red cells (erythrocytes), which are critical for oxygen delivery and also assist in the removal of toxic carbon dioxide; white cells (leukocytes), which help protect an animal against infection and parasitic disease; platelets, which promote clotting and wound healing; and a colorless fluid (plasma) in which these and other life-supporting blood components – such as hormones, proteins and salts – are suspended.

Disorders directly associated with blood abnormalities may not be as easily recognized by owners as other feline diseases. That does not mean that they are necessarily less serious. On the contrary, says Dr. Brooks, the diagnosis of various feline blood disorders – including low platelet counts, low red cell counts, high white cell counts, clotting problems, blood-related cancers and even blood poisonings – are a common occurrence at the Cornell University Hospital for Animals (CUHA). And the diagnosis of one of these disorders – feline anemia – is apt to occur “weekly, at least,” she says.

While not a specific diagnosis, anemia is the end result of several pathologic processes that reduce the bodys total erythrocyte mass. Erythrocytes, which are bright red in color because they are filled with an iron-containing protein (hemoglobin), develop in a cats bone marrow in response to stimulation by a hormone called erythropoiten. In a normal cat, this hormone (produced primarily in the kidneys) stimulates the production of the erythrocytes in response to an animals need for oxygen. Accordingly, the oxygen inhaled by the animal binds with the hemoglobin and is transported throughout the tissues in the cats body.

Because oxygen and other substances, such as iron (which red cells transport as part of the hemoglobin molecule), are necessary to support the life of any animal, a severe loss or destruction of red cells or a dramatic reduction in the ability of the bone marrow to produce new erythrocytes presents a severe feline health threat. There are two forms of feline anemia, Dr. Brooks points out – regenerative and nonregenerative. Either of these will result in the inadequate flow of oxygen throughout a cats system.

In regenerative anemia, she explains, the red blood cells are reduced in number as the result of acute or chronic bleeding or, less commonly, red cell destruction within a cats body. In some cases – a deep wound, for example – the blood loss will be obvious. In other cases – such as gastrointestinal bleeding or infection with blood-sucking parasites – the signs of blood loss may be subtle and may go unnoticed for an extended period of time.

In the other form – nonregenerative anemia – the bone marrow fails to produce new red cells rapidly enough to replace old cells that have been destroyed or have become otherwise dysfunctional. Common disorders that affect bone marrow function include: infection with a flea-borne disease (such as Mycoplasma haemofelis) or with the feline leukemia virus (FeLV); chronic kidney failure, which severely suppresses erythropoietin production; and cancer of the bone marrow, in which normal cell-producing tissue is overwhelmed and rendered nonfunctional by the presence of malignant growths. Regarding FeLV infection, Dr. Brooks says: “Its less frequently seen now, due to the development of an effective vaccine to protect against it. But it is still quite common, and, unfortunately, it is irreversible.”

Regenerative anemia caused by blood-loss is among the most common of these conditions, says Dr. Brooks. “Usually,” she notes, “transfusion with blood from a healthy donor will tide the cat over

as it resumes the development of its erythrocytes.” Kittens are at especially high risk for this disorder, since they have lower red cell counts than adults and they also tend to be somewhat iron-deficient at birth.

Other feline blood disorders, which – as Dr. Brooks points out – are diagnosed far less frequently than anemia at CUHA, include the following:

The signs that your cat may be anemic include lethargy, weakness and a reluctance to exercise, says Dr. Brooks. If you also notice that the cat is breathing rapidly and that its mucous membranes – especially the gums – are pale, its quite possible that the animal is seriously ill and in need of an immediate blood transfusion and other emergency treatment.

When the cause of the anemia is detected at an early stage, says Dr. Brooks, the condition is more readily treatable. If anemia remains undiagnosed and is allowed to progress, however, it can lead to a cats gradual disability and eventual death.