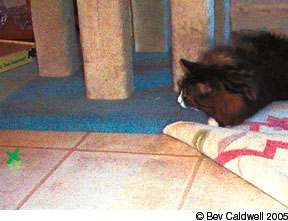 Your cat appears to be losing a few steps. She doesnt leap onto the sofa anymore. She doesnt chase that catnip mouse around for hours on end the way she once did. Instead, she sits for long periods of time staring into space, as if in a trance. Youre not concerned, however. After all, she is 12 years old, and any cat of that age is bound to slow down a bit.

Nevertheless, its a good idea to have your veterinarian give her a thorough checkup. Although the changes in her behavior that youve recently noticed could be attributable to her advancing age, they may actually be signaling the presence of a brain tumor, a mass of abnormal tissue within the skull that exerts pressure on this sensitive organ. If so, your cat must be treated immediately or she probably wont have long to live.

An Age-Related Problem
Brain tumors are very common in cats over the age of 10, but quite rare in animals younger than that, says Charles Vite, DVM, an assistant professor of neurology at the University of Pennsylvanias School of Veterinary Medicine. Reviewing his records, Dr. Vite feels safe in estimating that about 30 cats per year with brain tumors – more than two per month – are seen at his institution.

A Complex Organ
The feline brain, as those of other mammals, is the core of the nervous system, a complex network of circuitry that enables all of an animals conscious and unconscious activity. The nervous system is made up of two components: the central nervous system, consisting of the brain and spinal cord; and the peripheral nervous system, which comprises the cranial, spinal and other nerves. In a healthy animal, the entire arrangement works harmoniously to enable and control vital processes within a cats body and to allow the animal to manipulate and respond to its environment.

These functions are facilitated by the nearly instantaneous transmission of signals, largely from the peripheral nervous system, which extends to tissues throughout the entire body, to the spinal cord and the brain. The brain responds by interpreting these signals and immediately transmitting appropriate instructions back through the brain stem and spinal cord to the appropriate destination via peripheral nerves.

The coordinator and hub of all of this activity is the brain – the central processing unit. The brain consists of the cerebrum and cerebellum, which govern different nervous system activities, and the brain stem, which connects the brain to the spinal cord. Covering the brain and spinal cord are three layers of protective tissue called the meninges.

Other than its relatively small size (its about as big as a ping pong ball), the feline brains anatomical features and its functions are virtually identical to those of the human brain.

Types of Tumors
Criteria for determining whether a brain tumor is benign or malignant are different from those used in evaluating the severity of other cancers. Most cancers are considered to be malignant if they spread uncontrollably (metastasize) from their sources to other parts of the body. It is rare, however, for a brain tumor to spread. Therefore, given that a brain tumor is most detrimental because of its location, it is the speed with which it grows – rather than the extent to which it spreads outside the brain – that matters most.

As an example, Dr. Vite cites the most common by far of all feline brain tumors – meningiomas. About 60 percent of the brain tumors we see in cats are meningiomas, he says. They act very benign, that is, they grow slowly. But if you leave them alone, they will kill the animal. And if you take them out, the cat is usually cured.

Meningiomas develop on the thin, protective membranes (meninges) that enclose the brain. Because this kind of tumor is on the brains surface and the entire organ is encased in the skull – which cannot expand – the mass places increasing pressure on the brain as the tumor grows in size. As a result, brain function gradually becomes compromised.

Two other types of brain tumors – lymphosarcoma-related and pituitary gland tumors – have a fairly high incidence in cats, he notes. Lymphosarcomas, which can be caused by the feline leukemia virus (FeLV), originate in lymphoid cells – specialized cells of the immune system – and may also arise in many different areas of the body. They act like a malignant tumor and grow quickly, says Dr. Vite, but in many cases, the only place you see them is in the brain.

Pituitary gland tumors originate and almost always remain confined within the small organ, embedded at the base of the brain, that controls many of a cats hormonal functions. They often act as benign tumors and grow very slowly, says Dr. Vite. The problem is that they are located in the deepest part of the brain, and you cant usually remove them because theyre difficult to reach surgically. And over time, a pituitary tumor can grow to the point where it will kill a cat.

Common Signs
Signs that a brain tumor may be present differ according to where it is growing. However, says Dr. Vite, all three of the most common tumors generally produce similar behavioral changes in an affected cat. Their personalities tend to get dull, they become physically less active and they tend to walk robotically, he says. In addition to showing these behavioral changes, he adds, a cat with an advanced pituitary gland tumor may lose its eyesight.

The signs progress at different rates of speed, however, with meningioma signs developing very gradually, perhaps over years. The signs of lymphosarcoma and pituitary gland tumors progress much more rapidly, becoming clearly evident within a matter of months. The onset of seizures is a frequent and alarming sign of an advanced brain tumor of any type, says Dr. Vite, and indicates a medical emergency.

Treating the Patient
At a veterinary hospital, the presence of a tumor and its nature will be determined first through neurologic testing and then by an MRI exam. At that point, says Dr. Vite, Well have a pretty good idea – lets say 60 percent to 70 percent – about what kind of tumor is present. If its meningioma, the easiest thing to do, typically, is to remove it surgically through a small window in the animals skull. In most cases, the cat will be well enough to eat that same evening.

Prognoses differ, though, according to the type of tumor. Says Dr. Vite: If a meningioma is situated in a place that a surgeon can readily get to, the animal will have a very high chance of survival. About 80 percent of those cats do just wonderfully. Lymphosarcomas probably will be treated with chemotherapy or radiation. I cant recall a cat that has been cured of this type of brain tumor. In general, its a chronic condition that has to be managed over time. And because a pituitary tumor is very difficult to treat surgically, it is typically managed with radiation in order to shrink it.

Fortunately, he notes, the great majority of brain tumors are meningiomas, and, says Dr. Vite, the majority of them are eminently treatable. The other two, he points out, are not so good for a cat to have.