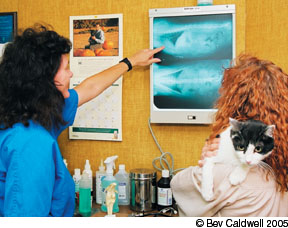 You may have noticed recently that your cat Elsa isnt quite as lively and playful as she once was. Well, at the age of 13, she has every right to be losing a step or two, right? Shes not what youd call antiquated, but she definitely qualifies for membership in the geriatric category.

But Elsas newly apparent pokiness may actually be attributable to causes other than advancing age. Although her last veterinary checkup indicated that she was in fine physical condition, its not unlikely that she is suffering from degenerative joint disease (DJD). Due to a deeply ingrained talent for self-protection, Elsa may be concealing the presence of this common feline disorder. After all, she doesnt want potential predators to see that shes weak, disabled or otherwise vulnerable.

For Elsas sake, you should ask your veterinarian to examine her for DJD, since the poor thing may also be concealing the fact that shes in significant pain a good part of the time and would welcome a bit of relief.

Sources of Damage
For all practical purposes, DJD is identical to the frequently observed human bone disease called osteoarthritis. According to Lizette Hardie, DVM, a professor of general and orthopedic surgery at North Carolina State Universitys College of Veterinary Medicine, the terms may be accurately used interchangeably.

Not to be confused with rheumatoid arthritis – in which joint damage is precipitated by a malfunction of the immune system – degenerative joint disease may be caused by an injury, by gradual wear and tear, or as the secondary consequence of a disease such as hip dysplasia that compromises the internal structure of a joint.

In all of these instances, DJD is characterized by the erosion of cartilage, the smooth tissue that protects the ends of bones from rubbing directly against one another within a movable joint. When this protective tissue is worn or torn away completely for whatever reason, the bone ends come immediately in contact, and the persistent grinding of bone against bone results in inflammation and pain of varying severity.

At High Risk
According to Dr. Hardie, there is no gender predisposition for DJD; male and female cats are equally susceptible to the condition. It is seen more frequently in obese cats than in those with fit body condition, since fat animals constantly exert excessive pressure on their weight-bearing joints. And the only obvious breed disposition for DJD, she notes, is in Maine coons, which are more susceptible to hip dysplasia.

The most obvious contributing factor is age. In a study led by Dr. Hardie, researchers carefully analyzed X-rays of the spines and limbs of 100 middle-aged or elderly cats (10 years of age or older). We found that very few of the animals had perfectly normal joints, she says, and that most of them had some sort of fairly obvious radiographic signs of arthritis. Indeed, the X-rays revealed that 90 percent of cats over the age of 12 showed evidence of DJD.

Young cats, however, are not exempt. The findings of another study suggested that 20 percent of all cats one year of age and older probably are arthritic to some extent.

Although that study was based on postmortem examination of shelter cats, in many of whom the condition is likely to be rheumatoid arthritis rather than DJD, Dr. Hardie considers the researchers estimate to be plausible.

All joints in a cats body can be affected by DJD, but those in which an owner is most likely to notice the problem are the movable joints, most often the shoulders and elbows. But the knees (stifles), the wrists (carpi) and the hips are also frequently affected. Outward signs of the condition will vary, depending on which joints hurt the most, the extent of damage and the animals age.

Typical Signs
The earliest visible sign of DJD is likely to be apparent stiffness and a subtle reduction in an affected animals activity. Altered gait may eventually occur as the disease progresses or if the joint disorder has resulted from an injury. But the altered gait, Dr. Hardie notes, is unlikely to take the form of limping and may go unnoticed, since the pain will affect both sides of the body equally, often resulting from pain in the front legs and the spine. Also, limbs that are not being exercised normally may start losing muscle mass and become noticeably thinner.

Most of the common early signs, however, are behavioral, says Dr. Hardie. The cat that used to leap up onto the kitchen counter will now be unable to get up onto a sofa easily, she observes. It may have accidents outside of the litter box because it cant manage to get itself over the lip of the pan, or it may become constipated because it cant position itself properly to defecate. And a cats mood may change. It may become grouchy and reclusive, for example. And if it has pain in its spine, it may stop grooming itself thoroughly.

Veterinary diagnosis of a cat that seems to be experiencing arthritic pain focuses on excluding other disease conditions and, insofar as possible, definitively confirming the presence of DJD. This will entail a complete medical history and overall physical examination of the afflicted animal, followed by an orthopedic exam, X-rays of the cats joints and perhaps an analysis of the fluids within its joints.

Cats are difficult to examine in an office, says Dr. Hardie, because theyll try to hide their lameness. So we often ask owners to videotape their cats at home and bring the tapes to us. Theyre very helpful when we do our orthopedic exams.

Easing the Pain
A number of surgical procedures – such as bone fusion and joint removal or replacement – may relieve an arthritic cats pain, but they also are likely to severely compromise its lifestyle. So treatment is, in most cases, directed toward pain management and preserving a reasonably good quality of life. Says Dr. Hardie: First, we review the household situation with the owner to make sure, if we can, that the cat will be in an environment where it will be able to get around comfortably. We want to know, for example, that food bowls are placed in a convenient area and that the litter box is one that the cat can get in and out of easily. And an arthritic cat should be able to get to its favorite places in the house without leaping.

The next step is to prescribe pain-killing medications that are known to be safe for cats.

Many painkillers that have been developed for humans – ibuprofen, for instance – can cause severe problems and even be fatal when given to a cat, says Dr. Hardie. What we have for cats are the nutraceuticals – drugs like cosequin, chondroitin sulfate and glucosamine. Well always start with something like that and move on to stronger painkillers – anti-inflammatory drugs and narcotics – as needed.

Also, Dr. Hardie points out, a number of non-drug treatments, such as acupuncture and therapeutic massage, can definitely help a cat with arthritis if done by an experienced professional. (Acupuncture, she notes, has been proven to relieve pain and to reduce the amount of pain-relieving drugs that are necessary, but it must be performed every two weeks or so.)

When we are beginning a pain-control regimen, says Dr. Hardie, we have to see a cat weekly for at least a month. Once weve got our drug cocktail together, then its every two weeks or monthly.

For the first stage of treatment – office visits, monitoring and so forth – an owner can expect to pay $100 or so per month, according to Dr. Hardie. The drugs needed for subsequent long-term home care will probably cost about $20 per month.

Since DJD is an incurable disease, she notes, the ultimate goal of any course of treatment – whether it is provided by the veterinarian or by the owner – is to keep the arthritic cat comfortable and functioning as well as possible for as long as possible.