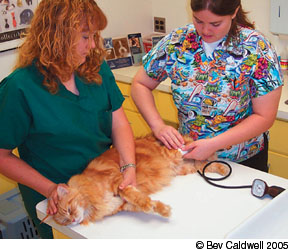 Cats, just like human beings, begin to experience noticeable physical changes as they transition into and beyond middle age. These changes may become evident as early as age eight or nine (the physiologic equivalent of the late 40s or early 50s in human years). And in a cat that has reached the ripe old age of 15 or so – as in people who have reached their seventies – these changes may well take the form of significant challenges to its health.

Unfortunately, some feline geriatric conditions may inevitably prove fatal. Others may be readily curable. And still others, though incurable, may be amenable to treatment that can extend the life of an elderly cat for several years.

A Manageable Condition
Hypertension (abnormally high blood pressure) is one of the latter disorders. If untreated, it can lead to blindness and potentially fatal damage to the heart, kidneys and brain. But given an accurate assessment of its cause and appropriate veterinary treatment, the condition is eminently manageable.

Feline hypertension is a frequently observed condition, according to Scott Brown, VMD, associate dean for academic affairs at the University of Georgias College of Veterinary Medicine. At Georgias Veterinary Medical Teaching Hospital, he says, We certainly see hypertensive cats on a regular basis. Were generally able to help patients with this problem, but the duration of their survival depends largely on the success we have in treating the underlying condition.

In humans, these two values are written one over the other, separated by a slash mark. Normal human blood pressure is 120/80 mm Hg (which stands for millimeters of mercury).

For cats, says Dr. Brown, we tend to agree that an animal with a reading below 150/80 is going to be just fine. But if a cats systolic pressure goes above 170, we worry about that.

Underlying Conditions
In rare cases, a cats elevated blood pressure has no discernible cause. This is known as primary – or essential – hypertension. Although primary hypertension is commonly diagnosed in humans, We dont recognize it very often at all in cats, notes Dr. Brown. On the other hand, veterinarians frequently diagnose secondary hypertension, which is a consequence or byproduct of another physical disorder.

Occasionally but very infrequently, the condition can stem from the presence of a a tumor that is producing excessive amounts of certain hormones. Its also possible that some medications may raise a cats blood pressure, but only temporarily. Fear, anxiety or sudden physical trauma may also cause a spike in an animals blood pressure, but random occurrences such as these have not been linked with chronic feline hypertension.

In the great majority of cases (about 80 percent, according to Dr. Brown), secondary feline hypertension is a consequence of either chronic kidney disease or hyperthyroidism. And of those two conditions, kidney (renal) disease is seen more often by far.

Several complex factors can result in the development of kidney-related feline hypertension. For example, Dr. Brown points out, the kidneys are responsible for maintaining the proper amounts of fluid and salt in the body. They also produce hormones that help regulate blood pressure. But diseased kidneys often produce abnormal amounts of these hormones or inappropriately retain salt and water. The resulting fluid retention leads to congestion in the circulatory system and, in turn, a buildup of pressure in the arteries. This is particularly a problem, he notes, in older cats.

In hyperthyroidism, there is an overproduction of thyroid hormone and a resulting elevation of an animals metabolic rate. Due to this acceleration, the heart beats faster and more forcefully – what Dr. Brown refers to as excessive cardiac performance. This overfunctioning results in increased pumping pressure, greater output of blood into the arteries, and sometimes a corresponding rise in blood pressure. When this happens, the heart is simply pumping too much blood into the system, he says. An estimated 25 percent of cats with hyperthyroidism have high blood pressure.

Risk Factors
Advanced age and the presence of either a chronic kidney disease or an overactive thyroid gland are by far the greatest risk factors for the condition, says Dr. Brown. There is no recognizable predisposition in terms of gender; males and females are similarly at risk. And as for breed, he says, Hypertension seems to be an equal-opportunity disease. Just about any breed is prone to developing it.

Regarding obesity, which is known to be an important risk factor for the development of high blood pressure in humans, he says, It would make sense that overweight would increase the risk in cats, but this link has not been well studied. What we do see are hypertensive older animals that tend to be thin as the result of renal disease or hyperthyroidism, but we suspect that many have been overweight earlier in their lives. You would expect obesity and excessive food intake to aggravate the risk, but we just dont know.

Clinical Signs
Cats with advanced hypertension will exhibit problems associated with the systems that are typically affected by the condition: the ocular system (sudden blindness or retinal hemorrhaging); the renal system (poor appetite, weight loss, increased drinking and urination); the neurologic system (seizures, disorientation); and the cardiovascular system (fluid retention, difficulty in breathing).

Overall, says Dr. Brown, the signs of systemic hypertension are often very vague and nonspecific, except for the ocular and neurologic signs. General malaise and poor appetite, for example, are signs of many conditions. So its essential that blood pressure be measured in order to make a diagnosis.

A Difficult Task
There are several different ways in which a cats blood pressure can be measured, says Dr. Brown. Some are unique to veterinary medicine, are more technically sophisticated than others, and are more likely to yield an accurate reading. But all of the methods are similar in one respect to the method used in measuring human blood pressure. He explains: They all entail the use of a cuff that is placed around the animals limb and is filled with air in order to occlude an artery. We then let the air out of the cuff and take the blood pressure measurement as this is happening.

This can be difficult, since the cat has no idea why were putting the cuff on its leg, and there can be a lot of anxiety. So its crucial for the veterinarian or technician to be as calming and soothing as possible – and this can take time.

When a cat is diagnosed with hypertension, says Dr. Brown, other tests – complete bloodwork, for example, will be done to identify the cause. Were always looking for that other disease, he says.

Easing the Pressure
Primary treatment for feline hypertension currently centers on two types of medication: calcium channel blockers and angiotensin-converting enzyme (ACE) inhibitors, both of which work by relaxing and dilating an animals blood vessels.

But if we can identify the underlying cause of the high blood pressure, Dr. Brown points out, we will also initiate treatment for that. Some cases of hypertension associated with hyperthyroidism can be reversed within a few weeks of treatment of the thyroid condition, but other cases will require lifelong medication. Chronic kidney disease, however, is not curable. Well generally not be able to take the animal off its antihypertensive therapy. In many hypertensive cats, the prognosis will ultimately depend on the success of treatment for the underlying condition, he says.

He advises cat owners to have their animals undergo frequent veterinary evaluations so that problems like kidney disease and hyperthyroidism can be identified early and appropriate therapy can be instituted.

This can reduce the effect that these conditions have on blood pressure, says Dr. Brown, before the cat becomes hypertensive.