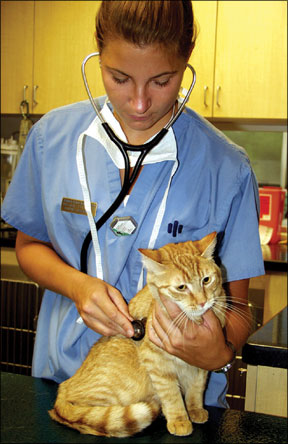 While casually petting your cat, you notice a small lump on its neck or behind one of its knees. What you may have discovered is a swollen lymph node. You dont have to be overly alarmed. The eruption is most likely a harmless and transient indication that the animal has a minor infection, and the swelling is likely to subside within a day or two.

Nevertheless, youd do well to take your cat to your veterinarian for a checkup of its lymphatic system, the complex network of glands and tiny vessels that transport life-sustaining substances throughout its body. In some instances, a swollen lymph node may be a sign that the animal is harboring a potentially deadly disease.

The news youll want to hear, of course, is that this system is intact and functioning normally. Owing to its direct or indirect influences on every aspect of your cats physical existence, the lymphatic systems fluent performance is needed in order to maintain the animals good health and to maximize its chances of living a long and happy life.

The major components of the lymphatic system include the thymus (a gland in which certain immune functions are carried out); the spleen (which filters abnormal cells from the blood); bone marrow (the tissue in bone cavities that produces red and white blood cells); and so-called gut-associated lymphoid tissue (GALT), which lines the surface of various areas of a cats body and prevents their exposure to infectious agents.

However, the distinctive and defining role of the feline lymphatic system, according to Margaret McEntee, DVM, an associate professor of oncology at Cornell Universitys College of Veterinary Medicine, is the transport of lymph, a vitally necessary fluid, through a network of tiny, interlaced ducts (lymphatic vessels) that connect at various points in the body with small, specialized collections of tissue called lymph nodes.

Some lymph nodes – small, bean-shaped structures – are situated deep within a cats body and defy easy detection. Others, called peripheral lymph nodes, are considerably larger and are more readily found at specific points near the bodys surface -under the jaw, in front of the shoulder, in the groin and behind the knees.

The functions performed by the lymphatic fluid, the vessels that transport it, and the lymph nodes include the delivery of oxygen and nutrients to cells, the

collection of metabolic waste products, the absorption of fat from the intestinal tract, the removal of tissue debris from the body and the filtering-out of bacteria, viruses and other infectious agents.

While typically sturdy and resistant to disease, the feline lymphatic system is subject to several disorders. The lymph nodes may become severely enlarged or inflamed or both as a result of infection, physical trauma or reaction to vaccination, for example. And dilation or blockage of the minuscule lymphatic conduits may occur due to pressure exerted by a foreign body.

The system is also vulnerable to cancer. A cats lymphatic system can, for example, be affected by leukemia, a systemic cancer that originates in the bone marrow. Another form of neoplastic lymphatic disease that is found in cats is lymphangiosarcoma, which can spread via the lymphatic fluid to the local lymph nodes, lungs, liver, spleen and even skeletal muscle. Fortunately, this cancer is extremely rare, reportedly found in less than one percent of the general feline population.

Far more common, says Dr. McEntee, is a condition called lymphoma, a malignant cancer typically affecting not only the vessels and nodes, but also lymph cells throughout the body. The incidence of this type of cancer is strongly linked to infection with feline leukemia virus (FeLV) and, to a lesser extent, feline immunodeficiency virus (FIV).

Recent studies have also shown that cats routinely exposed to tobacco smoke are at significantly higher risk for gastrointestinal lymphoma than cats that are not exposed. “This is thought to be associated with their grooming,” Dr. McEntee says. “The carcinogens in airborne cigarette smoke are deposited on their skin, and they ingest them into their systems when they groom themselves.” (See CatWatch, Dec. 2007.)

While lymphoma cannot be prevented, she notes, the chances that a cat will develop the disease may be reduced through vaccination against FeLV and by making sure it does not live in an environment contaminated with tobacco smoke.

Early detection of cancer and other serious feline lymphatic diseases may improve an animals chances for survival, Dr. McEntee points out. In that many of these disorders are age-related, she recommends that all cats seven years of age and older undergo twice-yearly physical examinations that include blood-chemistry testing and thorough palpation, which could detect lymph-node swelling and other clinical signs of disease.

For cats of all ages, she adds, owners can play an important role in discovering lymphatic disorders at the earliest stage. She advises: “Ask your veterinarian to show you where the peripheral lymph nodes are located. The ones that are easy to find are right beneath the angle of the jaw, just in front of the shoulder and right behind the knee joint. Every two to four weeks, while petting or grooming your cat, palpate the nodes with your fingertips. Enlargement of a solitary lymph node may be due to infection, inflammation, lymphoma or spread of cancer from another site. Discovering an enlarged lymph node doesnt necessarily mean that your cat has cancer. But if it turns out that lymphoma is indeed responsible for the enlargement, you may have spotted it very early in its progression.” v