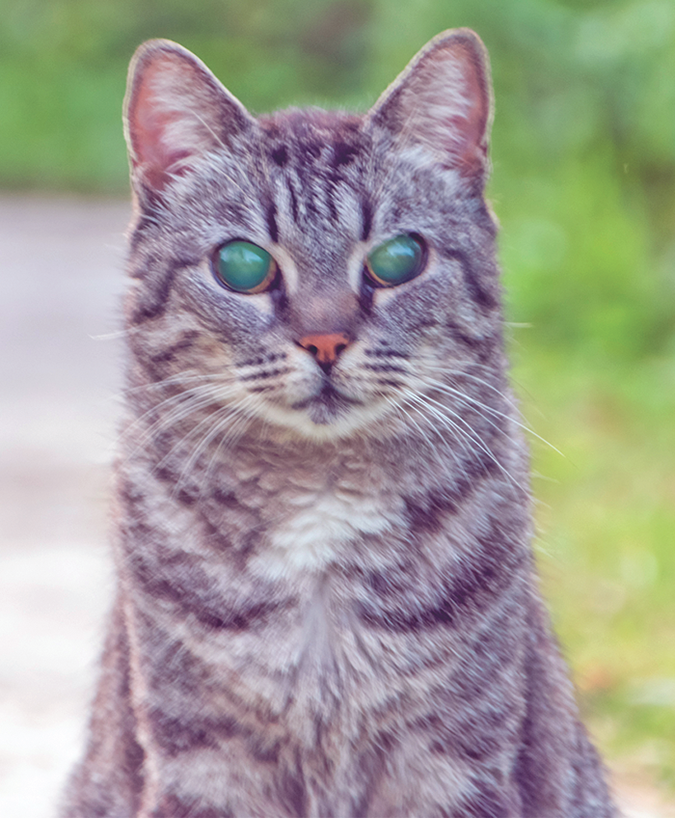 Q.Sebastian, a big orange longhair, was adopted in 2009. He tested positive for feline immunodeficiency virus (FIV), but had no symptoms. In 2017, he started to have eye symptoms and eventually appeared to be blind. He was eating, drinking, socializing, and had regular urination and defecation. Three months ago, he began bleeding from his nose and eventually from his eye and crusting.

During this time, our calico cat, Annie, was seen drinking from Sebastian’s water bowl (we had tried to keep them separate). Drops of Sebastian’s blood were occasionally in the bowl. Can she get FIV from drinking from the bowl with drops of blood in it? She has recently tested negative for FIV.

A. Thanks for getting in touch, and I am very sorry to hear of Sebastian’s problems.

Although we cannot ascertain this from afar, it may be that he is being affected by more than one disease process. The reason I say this is that the vision problems and bleeding from the nose and eyes are not common clinical signs of FIV infection. The most common signs of FIV in cats are chronic gingivitis/stomatitis (inflammation of the mucous membranes of the oral cavity), inflammation of the nasal cavity, lymph node enlargement, and weight loss.

The vision problems and bleeding from the oral and nasal cavities may be caused by a number of things, but one thing that comes to mind is hypertension (high blood pressure).

Hypertension can cause retinal detachment that can lead to sudden blindness and may cause bleeding from the nose and/or eyes (the latter less commonly). Hypertension may occur as a primary problem in cats (i.e. without any other discernable diseases, called primary hypertension), but this is not common. More commonly, it is caused by other diseases, including kidney disease, hyperthyroidism, or diabetes.

Please discuss these possibilities with your veterinarian as soon as possible, and it is very important that you work with him/her to make sure that Sebastian’s blood pressure is normal and that he is not experiencing any of these other diseases.

With respect to Annie becoming infected with FIV, while it is theoretically possible (some studies have shown that cats can be infected via the oral cavity if given high doses of FIV viral particles), it is very unlikely. FIV is generally considered to be passed from one cat to another via bite wounds, so the likelihood of cats passing the virus from one to another is very low if they do not fight. Even grooming each other does not seem to be sufficient exposure to result in transmission among cats living together.

It is also important to point out that while cats with FIV may suffer from the problems mentioned above, recent studies suggest that cats infected with FIV have a good chance of living a normal lifespan and that the quality of their lives can be excellent, provided that proactive veterinary care is provided.

Please discuss these important issues with your veterinarian, and make sure that you are bringing both cats in for regular check-ups. Sebastian should be brought to the veterinarian at least twice per year, as should all cats over 10 years of age. If Annie is otherwise healthy and is less than 10 years old, annual visits to the veterinarian are likely sufficient.

Thanks, and best of luck to you all. Please send us an update when you can.