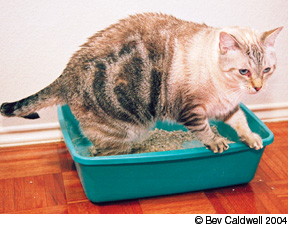 The feline urinary system, like its human counterpart, is an impressively complex arrangement of components. When operating harmoniously and efficiently, it plays a crucially supportive role – directly or indirectly – in all of a cats bodily processes.

The key functions of this system are (1) to filter metabolic waste such as urea, mineral salts and various toxins from circulating blood; (2) to help regulate the volume of body fluids and the blood levels of several important chemicals and hormones; (3) to initiate the recirculation of purified blood throughout an animals system; and (4) to facilitate the excretion of the filtered-out waste products (mixed with water to form urine) before they reach toxic concentrations in the body.

A Two-Tiered Process
This vitally important system is composed of an upper tract and a lower tract.

The upper urinary tract consists of two kidneys, which handle the biochemical processes, and two ureters, slender tubes leading from each kidney that deliver the waste-containing urine to the lower tract.

The lower urinary tract consists of the bladder, a muscular sac that receives the urine delivered through the ureters and stores it until it is expelled from the body, and the urethra, the thin tube that leads from the bladder to the outside world. In males, urine is voided through the penis; in females, it is voided between the folds of the vulva.

Well-informed cat owners will, of course, be aware of the life-threatening afflictions that can beset the upper tract-conditions that, if untreated, will lead to acute or chronic kidney failure and almost certain death. But owners should also know that the lower urinary tract – though far less complex in form and function – is also vulnerable to a variety of painful and possibly lethal disorders.

Useful Terminology
Many veterinarians persist in using such acronyms as FLUTD (for feline urinary tract disease) and FUS (feline urinary syndrome), but David Polzin, DVM finds such terms too non-specific to be helpful. While these terms recognize the presence of certain abnormal physical signs, they do not identify any of the several specific disorders that can cause such signs to appear. Each disorder requires correspondingly tailored treatment.

Some people use a term like FLUTD to include all three of the most common feline urinary disorders, says Dr. Polzin, a professor of veterinary medicine in the University of Minnesotas Department of Small Animal Clinical Sciences, while some may use it to describe only one of them. So terms like these have now been pretty well thrown out, since they can cause huge confusion.

More appropriately, he advises, the disorders that are responsible for the vast majority of feline urinary problems are best referred to by their individual names: idiopathic cystitis; urolithiasis; and urinary tract bacterial infection.

Contributing Factors
The great majority of lower urinary tract disorders are inexplicable – their cause or causes are unknown. In some other cases, a stricken animal lacks the ability to adequately metabolize certain chemicals, and urinary stones form as a result. In still other cases, a rampant microbial invasion is obviously to blame.

The extent to which the age of a cat may influence susceptibility is unclear, since older cats appear to be more vulnerable to some urinary disorders and younger cats seem more prone to others. Overall, the age of cats experiencing a lower urinary tract disease is about four years. According to Dr. Polzin, there appears to be no marked disposition for these disorders in terms of specific feline breeds.

In rare cases, a cat may experience lower urinary tract problems as a result of physical injury – being hit by a car, for example. In extremely rare instances, male cats may suffer problems as a result of hypospadias, a congenital defect in which the urethral opening is on the underside of the penis rather than at its tip. This misplacement allows the easy migration of surface bacteria into the urinary tract.

In addition, some research has suggested that urinary tract disorders may be fostered by allergies, improper diet and even a cats stress level, with varying degrees of credibility attached to each of these possible contributing factors.

Common Signs
At the same time, Dr. Polzin acknowledges that the three most common lower urinary tract disorders are alike to the extent that they tend to produce similar signs in afflicted cats. The bladder can only respond in a certain number of ways, whatever the cause, he notes.

Among these signs, those most frequently observed include: straining during urination; marked increase in frequency of urination (pollakiuria); blood in the urine (hematuria); painful urination (dysuria); loss of appetite; unproductive attempts to urinate; changes in voiding habits, such as urinating in unusual places; and persistent licking at the opening of the urethra.

Most Common Disorders
These signs may accompany any of the three most frequently observed lower urinary tract disorders, despite the fact that each is a unique disease entity.

Idiopathic cystitis: The causes of this disorder, which accounts for about 80 percent of cases, are as yet unknown. It manifests in either of two forms – non-obstructive or obstructive.

According to Dr. Polzin, the non-obstructive form may be seen in both males and females. It tends to have a rapid onset. And it usually resolves itself spontaneously within five to seven days. Recurrence is common, however. About 50 percent of affected cats are normal between episodes but have additional bouts periodically, anywhere from days to years after the initial onset of the disorder.

The obstructive form of the disorder, which is far more dangerous, is marked by the development of relatively soft urethral plugs – clumps composed primarily of organic material – that block the narrow urethra and obstruct urination. Obstructive cystitis is seen almost exclusively in male cats, and is life-threatening if the plugs are not removed or the blockage otherwise relieved immediately.

Urolithiasis: About one-fifth of lower urinary tract problems are attributable to this disorder, which is uniquely characterized by the formation of stones in the lower urinary tract. Unlike the urethral plugs associated with idiopathic cystitis, the stones are composed primarily of inorganic materials – most often the minerals struvite and calcium oxalate.

Some research has indicated that dietary modification may help discourage urolithiasis – moving from dry food to wet food, for example, or using cat food containing ingredients that inhibit the formation of the stones. But that notion has yet to be conclusively proven. Although the stones may be irritating, says Dr. Polzin, their presence alone does not represent a medical emergency – unless they block the urethra. In that case, he points out, immediate veterinary attention is required.

According to Dr. Polzin, The condition encompasses a wide variety of clinical entities whose common denominator is microbial adherence, multiplication and persistence in any portion of the urinary tract that is normally sterile. The entire urinary tract is at risk of invasion once any of its parts becomes colonized with bacteria.

Diagnosing the Condition
Determining which condition is fostering the signs of feline lower urinary tract disease is generally achieved by a rule-out diagnosis, says Dr. Polzin. First you determine by means of an X-ray that there are no stones, he says, and then you determine, by taking a culture, that bacterial infection is not present. Once you have done this, you can conclude that the cats signs are being caused by idiopathic cystitis.

Given that no urethral obstruction is evident and, therefore, that emergency treatment is unnecessary, the prognosis, Dr. Polzin notes, is that in most cases the signs will just go away on their own in about a week or so, the way a cold goes away. Cat owners must understand, however, that the problems with urination are very likely to recur – often repeatedly – and that they should vigilantly watch for any signs of urethral obstruction on each occasion and seek immediate veterinary care if they do reappear.