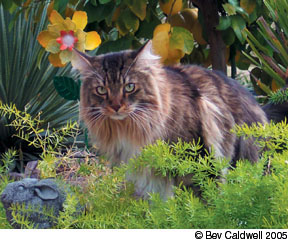 The term fungus and its plural, fungi, are used to describe any of countless, usually one-celled organisms that thrive naturally in the environment and play a valuable role in keeping planet Earth and its inhabitants thriving as well.

Fungi are saprophytic organisms. That is, they derive their nourishment from inert, decaying organic matter – rotting vegetation, fecal matter, decaying animal tissue and the like. By digesting biological debris, fungi aid in its decomposition and the subsequent release of its nutrients back into the biosphere, where they can once again be useful.

Potential Severity
According to William Miller, Jr., VMD, a professor of dermatology at Cornell Universitys College of Veterinary Medicine, there are gazillions of different types of fungi existing in nature, including molds, yeasts, mildews and so forth. Theyre harmless to cats, he says, as long as they dont set up shop on the skin or inside the body. If they do, they have the potential to cause a wide variety of feline health problems.

In addition to settling on an animals skin, fungi can enter a cats body through inhalation, ingestion or via an open wound. The severity of the resulting fungal disease (mycosis) will often depend on the ability of a cats immune system to respond to the organisms presence. In some cases, the immune response will be adequate, but in others it wont, and medicinal or even surgical treatment will then be required.

If an animals immune response is sufficiently strong, or if medication is given promptly and it works, a fungal infection will usually be short-lived, says Dr. Miller. Severe and stubborn infections, however, can have life-threatening consequences.

Prime Suspects
Feline mycoses, says Dr. Miller, can be classified as superficial, intermediate or systemic, depending on the depth to which a fungus has penetrated a cats body.

Superficial: These include infections that affect the skin and generally go no deeper. The most common of these – and the most frequently observed by far among all feline fungal diseases – is dermatophytosis, also known as ringworm.

The vast majority of ringworm infections are caused by a fungus called Microsporum canis, which invades the skin, claws and, most problematically, the outer layers of an animals hair coat. Once entrenched, the fungi thrive by digesting keratin, a protein substance that is the main structural component of hair and nails. As they consume the keratin, these microscopically tiny fungi – dermatophytes – reproduce quickly, creating millions of spores that are capable of developing into new microorganisms.

When the dermatophytes come into contact with healthy feline tissue, several outcomes are possible. They may go unnoticed and be brushed off by a meticulously self-grooming cat. They may lose out in competition with more robust microorganisms and eventually disappear. They may establish residence on the skin without causing any adverse reactions. But in the worst cases, they settle in droves on the animals skin and cause dermatitis – an inflammatory disease that will manifest itself in a variety of unpleasant ways.

The classic signs of ringworm infection include circular areas of hair loss, broken and stubbly hair, scaling or crusty skin, alterations in hair or skin color, inflamed areas of skin, excessive grooming and scratching, dandruff, infected claws or nailbeds and even lameness.

Two other types of superficial fungal infections are sometimes seen, though their occurrence is rare compared to that of ringworm. Indeed, Dr. Miller notes that they are extremely uncommon in cats.

Intermediate: Also rare, compared to ringworm, are diseases that extend beneath the skin. Most do not spread beyond the site where they entered the body. These are often caused by wounds, says Dr. Miller, such as those occurring when a stick, a thorn or a wood sliver with fungus on it punctures an animals skin.

As an example, he cites sporotrichosis, a fungal infection that will initially reveal its presence in the form of small pimples. The pimples may vanish after a few days, but can also progress to wide and deep skin nodules that may become ulcerated and ooze a thick, brown liquid. He notes that this unpleasant condition is only one among hundreds of intermediate fungal infections to which a cat is vulnerable.

Systemic: These fungi go into the body, says Dr. Miller. Depending on the specific organism and where it lodges, they can cause signs ranging from sneezing, nasal discharge and other respiratory problems to joint pain, bone pain and diarrhea.
The most common systemic feline mycoses, which usually are caused by a cats inhaling a fungus, include cryptococcosis, blastomycosis, histoplasmosis and coccidioido- mycosis.

Some of these are seen by veterinarians all over the U.S., Dr. Miller points out, and others are far more common in certain regions of the country – for instance in Louisiana, Florida and other areas that are typically warm, wet and swampy, because some saprophytes like to grow in water.

Identifying the Fungus
A veterinarian will first attempt to exclude the many other dermatologic and systemic conditions that a fungal disease may mimic, such as a flea allergy or respiratory ailment. The signs of ringworm are quite obvious, though.

To confirm an initial diagnosis, the veterinarian may pluck some hairs from the animals coat and examine them under ultraviolet light, where a fungus-coated hair will radiate a yellowish-green color.

Next, those hairs that glowed under the light are examined microscopically to make sure that the fluorescence was indeed caused by a fungus and not by some metabolic byproduct that would also glow under ultraviolet light.

The third and most reliable diagnostic step is a fungal culture, in which the suspect cat hairs are incubated for up to several weeks in a culture medium and then examined for the presence of a specific fungus.

For cats showing signs of intermediate infection, it may be sufficient for the veterinarian to submit affected tissue for culturing. For suspected systemic infection, X-rays and blood tests may be in order to rule out the presence of pulmonary or gastrointestinal disease. Treatment must always be initiated immediately if a fungal infection of any type is diagnosed.

Solving the Problem
Treatment will vary depending more on the type of infection –  superficial, intermediate or systemic –  than on the specific yeast or other fungus involved. In some cases, the treatment is administered by the veterinarian; in others, the cats owner may do it.

Treatment for a superficial infection like ringworm will probably involve shaving the hair off the affected area with an electric clipper, dipping the animal about twice a week in a solution of warm water and a topical antifungal agent, and oral medication.

Intermediate infections are likely to require oral medications as well as minor surgery to remove any lesion that has become too large and deeply anchored below the skin surface. Systemic therapy will probably require powerful antifungal medications to be administered by the owner on a schedule determined by the veterinarian.

Lowering the Risk
Is there any way to minimize the risk of feline fungal disease? When it comes to ringworm, says Dr. Miller, the only realistic measure is to keep your cat indoors and away from other animals, since that fungus is spread almost always from cat to cat. And if you take your cat to a show, dont let it sit on a table where other cats have sat. The disease can be spread from just a few hairs that the previous cat left behind.

Regarding the other fungal diseases, he points out that even keeping your cat indoors is not foolproof, since mold spores are ubiquitous, thriving in the saucers and soil of indoor plants, in damp basements and bathrooms, and so forth.

The best way to deal with the threat of feline fungal infection is to minimize the risk of serious disease progression by recognizing the signs and seeking veterinary care as soon as they are noticed.