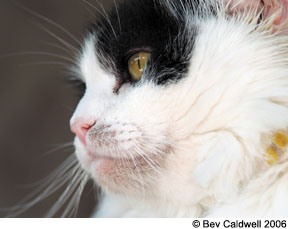 One of your favorite things about your cat is her sleek, shining fur. Lately, though, it seems like your cat has been having a bad fur day – maybe even several. Her fur looks rather unkempt. When you think about it, she hasnt seemed very interested in grooming herself over the past couple of days. Whats going on?

A decline in grooming or a change in the cats fur are some of the subtle signs that your cat may be ill, says Jane Brunt, DVM, of the Cat Hospital At Towson in Baltimore, Maryland. In fact, you can view your cats fur as a barometer of her overall health and well-being. If you do notice a change, report it to your veterinarian so that you can take steps to start treatment quickly.

When Fur Changes Indicate Illness
One of the most common fur changes in cats is the loss of hair. You might notice clumps of fur coming out when you pet her, or her fur might just start to look patchy and scraggly.

Causes for hair loss – called alopecia – include skin parasites (fleas and mites) and internal parasites (tapeworms or roundworms). These culprits indirectly rob your cats body of nutrients. Bacterial, viral and fungal infections can also cause skin eruptions. Anything that irritates your cats skin may be the culprit for thinning fur. There are other medical reasons for hair loss, says Dr. Brunt, such as an overactive thyroid or other hormonal gland abnormalities.

Cats can also suffer from allergies – just as humans do – to proteins from grasses, molds, pollens, dust mites, etc., and also to medications and even foods, says Dr. Brunt, who is president of the American Association of Feline Practitioners. People dont realize that an allergen doesnt have to be something new that your cat has been exposed to. It can be something that your cat has been around for a long time, and an internal change makes the cat begin to react. Often, allergens are accompanied by itching (pruritus) and then licking or scratching, which leads to skin crusts or scabs and fur loss. The continued cycle of itching and scratching is both uncomfortable and unhealthy.

Occasionally, people will notice streaks of reddish tinges developing in their non-reddish cats fur. While some experts think this could be a sign of a serious protein deficiency, there are other conditions that may cause this color change. I would be concerned that the red streaks could be blood from the mouth, says Dr. Brunt, indicating dental or other oral disease. Red streaks may also be a sign of fleas (as flea feces are digested blood).

But a less obvious skin problem can also do this. For some cats, skin irritation leads to repeated fur licking. The saliva, which contains proteins called porphyrins, stains the fur, making the hair develop a reddish/orange tinge.

Too Much Grooming
One thing that drives human companions crazy is a cats excessive licking (or chewing, sucking or rubbing) of the same place over and over. These behaviors often cause fur loss, skin irritation and even ulcers and thick scabs that wont heal until the behavior stops.

How does excessive grooming start?  There are several ways. For example, some cats may continuously lick their abdomens when they have cystitis or other causes of abdominal pain. When the bladder condition is resolved, the licking usually stops.

Other medical conditions include irritation from fleas, mites and ringworm fungus, any of which will cause a cat to lick or bite at the itchy, inflamed area.

Anxiety may also lead to excessive grooming. Its equivalent to the human habit of nail biting. Called psychogenic licking, this emotional/behavioral condition may be triggered by separation anxiety, the addition of a new pet or family member to the household, a lack of attention – and even just plain boredom. The main thing to remember is that excessive grooming may persist long after the initial cause is gone.

Too Little Grooming
Grooming is a big part of your cats daily regimen (besides sleeping 16 hours a day and eating). Its time to be concerned when your cat stops grooming herself. Failure to groom usually goes hand-in-hand with other signs of illness, such as not eating, hiding and appearing lethargic.

Sometimes overweight cats cannot move flexibly enough to groom all parts of their bodies. The result is usually snarled fur and dandruff. Besides losing weight, such cats may need extra help in keeping their skin and fur in good condition.

Longhaired cats may also have trouble grooming themselves. Their long fur prevents them from thoroughly getting through the inevitable tangles, resulting in tough mats that you can only get rid of with the help of a brush and comb, or even a clipper.

Treatment for Fur Problems
At any sign of grooming problems or fur changes, have a veterinarian examine your cat for illness or abnormalities, says Dr. Brunt. A complete physical exam and history, along with some simple tests, will often help identify an underlying medical problem if it exists.

Once those concerns have been eliminated, says Dr. Brunt, your veterinarian can address the possible stress and behavioral aspects that may be playing a role in hair loss or the licking/chewing/gnawing behavior.

Treatment for excessive grooming problems due to stress may involve anti-anxiety medication or a referral to an animal behaviorist who can help your cat change his habits and get back his crowning glory of beautiful fur.