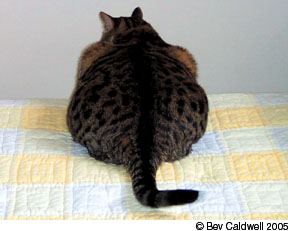 A marked and sustained loss of appetite, anorexia, is a sign of many feline diseases. Among the more serious of these is feline hepatic lipidosis (FHL), a condition in which fats (triglycerides) accumulate within a cats liver cells. According to Sharon Center, DVM, a professor at Cornell Universitys College of Veterinary Medicine who is board certified in veterinary internal medicine, this condition is probably the most common liver ailment in cats.

Although the frequency of FHL has declined over the past several years, and although Dr. Centers patient load is limited by the demands of her laboratory research, she says that she still sees probably one case per week at the Cornell University Hospital for Animals. But in a busy cat clinic, she says, veterinarians may see them every day.

A Vital Organ
The feline liver, like that of humans, is large by comparison to the other internal organs. It is divided into a number of separate sections, or lobes, each of which comprises thousands of tiny structural and functional units, called lobules, which are in turn made up of cells called hepatocytes.

The various life-supporting functions of the liver include helping in the digestion of food; supplying an animals energy by storing and releasing a carbohydrate called glycogen; synthesizing certain fats and proteins; storing vitamins; manufacturing bile (a fluid needed for absorbing fats and facilitating digestion); reducing the poisonous properties of certain chemical compounds and manufacturing various hormones.

For some unknown reason, Dr. Center explains, cats have a high proclivity for accumulating triglycerides in their hepatocytes, and these cells become filled with fat and unable to function properly. Humans can get lipidosis – from being overweight or drinking a lot of alcohol, for instance – but they usually end up with cirrhosis, in which the liver becomes permanently hardened and deformed. This doesnt happen with cats. If not rescued promptly from the disease, they dont just end up with deformed livers – they die!

Underlying Conditions
In more than 90 percent of cases, says Dr. Center, FHL is a secondary consequence of some other underlying condition, such as obesity, diabetes, cancer, hyperthyroidism, pancreatitis, kidney disease or another type of liver problem. In rare instances, the underlying condition cannot be identified, in which case the disease is called idiopathic hepatic lipidosis. Ive seen the condition in cats with all sorts of body conditions, saysDr. Center, but the incidence of it seems much higher in obese cats.

However, she notes, FHL can afflict even a very well-conditioned cat that, for some reason, suddenly stops eating. And the onset and progression to a life-threatening stage can be very rapid. In an overweight cat, she says, Ive seen it happen in as brief a period as two days.

Causes of Anorexia
What causes the anorexia that almost always precedes the onset of FHL? I would say that food avoidance most frequently occurs in animals that have something wrong with their gut, their intestinal tract, says Dr. Center. But there are many other precipitating conditions. Ive seen it in cats with cardiac failure, with neurologic problems, and even dental disease – probably because they cant chew. Also, cats depend very much on their sense of smell when they eat, so they have to have an oral-nasal organ that is working properly in order for them to want to eat. So a cat that has, for instance, severe sinusitis or an upper respiratory infection or ulcers in its mouth is at greater risk for lipidosis.

Additionally at elevated risk, she adds, are obese cats whose owners have abruptly put them on a weight-reduction diet. You have to be very careful when you do that, Dr. Center advises. If a cat decides that youre feeding it bad-tasting food, itll go on a fast, and then it can get very sick.

It is also well known that anorexia can stem from a number of behavioral issues – for example, an owners abrupt and sustained absence from the home or the presence of new cats or dogs in the household.

According to Dr. Center, FHL patients are usually middle-aged cats. But Ive seen the condition in animals ranging from three months to 25 years of age. And no breed is spared; Ive seen it in longhaired, shorthaired, domestic, feral and pedigreed cats.

Signs to Look For
In a healthy cat thats eating properly, consumed fat is efficiently broken down in the liver and exported throughout the body to supply the nutrients required for all of the animals life processes. But in the anorexic cat, excessive amounts of fat move to the liver from storage areas throughout the body to compensate for the lack of fat that would normally be consumed through its food. The liver is unable to process this excessive intake of fat, and so it collects in the animals liver cells.

They become reclusive, says Dr. Center. They will avoid their food bowl – wont even go near it – as if theyre scared of it. In fact, when they see it, they may move away quickly and just sit there salivating. If they do eat a little bit, they may vomit soon afterward. Also, they may become jaundiced – theres a yellowish tinge to the skin in their ears and on their gums.

In extremely severe cases, an anorexic cat may have bleeding disorders, its eyesight may become noticeably weaker and the animal may have seizures or manifest other signs of neurologic abnormality. The warning signs of FHL can go on for days or weeks, she notes.

Diagnosing Hepatic Lipidosis
If FHL is suspected, the tentative diagnosis will be confirmed by a thorough physical examination, various blood tests, analysis of liver tissue samples and possible ultrasound imaging. The liver will be clearly enlarged, says Dr. Center, and there will be characteristic blood changes. For example, she notes, one blood test would determine whether a cats level of bilirubin – a bile pigment – is normal or markedly high, which would be a convincing sign of FHL. A tissue sample – withdrawn by means of a thin needle – would reveal whether the animals hepatocytes are filled with fat. And an ultrasound image of a cat with FLS would show a noticeably bright appearing liver.

Treatment Priorities
Most important in veterinary care, says Dr. Center, is to nourish an affected cat immediately by means of intravenous fluids, vitamin supplements and feeding by means of a stomach tube. At the same time, it is crucially important to identify the condition responsible for FHL and to initiate therapy without delay. She strongly discourages the veterinary use of appetite stimulants at this stage. They can give a false sense of security, she says, and they can have toxic side effects. And cats dont eat dependably after their administration.

Therapy for FHL is complicated, she notes, and requires constant monitoring of a stricken cats condition. The owner cannot expect that this can be done cheaply and at home, says Dr. Center. The animal will have to be hospitalized, and I can usually tell within a week or 10 days whether it will survive.

After a cat is successfully treated for early-stage FHL and sent home – which can take place in just a few days – its owners will have to continue tube-feeding it, usually for a month or so. (The technique for this, of course, must be learned from a veterinarian.)

The good news, says Dr. Center, is that cats surviving an episode of FHL rarely relapse. And they are not apt to sustain any long-term damage to their livers. During the past 20 years or so, she says, weve improved the outcome of this disease because more veterinarians know about it and know how to give the patients alternative routes of feeding when the disease is diagnosed.