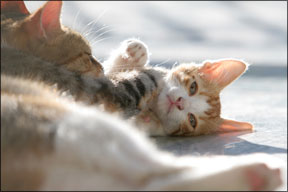 covering of the front of the eyeball). Although a wide range of viral and bacterial agents may be responsible for this disorder, one of the most common – perhaps the most common – cause is infection with feline herpesvirus (FHV).

According to Fred Scott, DVM, PhD, professor emeritus of virology at Cornell Universitys College of Veterinary Medicine and the founding director of the Cornell Feline Health Center, male and female cats of all ages and breeds are susceptible to FHV infection, although young kittens are most often affected. Incidence of the infection is especially high in crowded boarding facilities and adoption shelters, where the virus can easily be passed from one animal to another.

A Tenacious Invader. Like other viruses, but unlike a bacterium or a fungus, FHV is not a living organism. Rather, it is a complex, submicroscopic structure consisting of genetic material encased in a protein shell. Although more of a chemical than a creature, it has an irrepressible drive to reproduce rapidly and without limit in the body of a host animal.

Although FHV can exist for no longer than four or five days at room temperature in the external environment, it can thrive heartily in the moist secretions of an infected cat. “The virus is usually passed from cat to cat through grooming or other direct physical contact,” says Dr. Scott. “It can also be spread by aerosol. During acute infection, theres a lot of sneezing that goes on. An infected cat will blow the virus out into the environment, and cats a few feet away will inhale it.”

And, he adds, the virus can be transmitted from a newly infected queen to her kittens during pregnancy or through grooming them after they are born. Kittens are susceptible at five weeks of age or so, he notes, after they have lost their natural maternal immunity. And once FHV has invaded a cats system, there is no getting rid of it.

The invading virus attaches to cells in the new hosts nose and pharynx, explains Dr. Scott. “It destroys those cells, goes to neighboring cells, kills them as well and moves on,” he says. “So all you have to do is get one virus particle in there, and youre off and running.”

Early Warnings. The initial signs of disease, which will emerge within four or five days following infection, will appear in both the nasal and ocular structures, since they are connected. Says Dr. Scott: “It starts with sneezing, and soon after that, you get discharge from the eyes, usually both of them. If it starts in just one eye, it will be in both eyes shortly. The discharge is watery to start and soon becomes thicker and more purulent. The eyes may be reddened and swollen, and about two to four weeks later a very small percentage of cats will develop corneal ulcers.”

In most instances, Dr. Scott points out, FHV is not a killer of cats. “There may be a bit of sneezing and discharge from the eyes and nose that goes on for a day or maybe several days,” he says, “but then the infection self-resolves within a week or two, the signs disappear and the cat survives.” In some cases, however, there is so much destruction of the epithelial cells in the upper respiratory tract – especially in the nasal sinuses – that bacteria are able to establish chronic infections, especially chronic sinusitis.

Although the signs of FHV infection usually vanish within weeks, the virus remains forever in most affected cats, sequestered in a dormant stage in an animals nerve cells. At any point thereafter in the animals life, the virus can become reactivated and the signs – the sneezing, watery eyes and so forth – will reappear and linger for a few days before once again vanishing. Years may pass between these recurring bouts, which are often brought on by stressful experiences, such as exposure to cold temperatures, raising a litter of kittens or the introduction of a new cat or dog into a household. Although the virus is dormant, it can still be transmitted by a “carrier cat” to an uninfected cat during one of these recrudescent episodes. Recurrent expressions of the virus, says Dr. Scott, rarely result in “a really sick cat.”

A Diagnostic Challenge. The clinical signs of FHV infection are similar to those associated with other feline infections, such as acute respiratory disease caused by feline calicivirus (FCV) or chlamydiosis, which results from a bacterial infection. In some instances, a cat that is FHV-positive can be simultaneously infected by one of these other organisms, a situation that Dr. Scott characterizes as “a double whammy.”

“The signs may give you a good indication of which disease is present,” says Dr. Scott, “but to confirm that its FHV, youve got to do a viral isolation, usually obtained by means of a nasal swab. In some cases, you may want to know exactly what youre dealing with, but you usually dont spend time confirming the diagnosis. You can go ahead and treat the condition as an upper respiratory infection of viral origin.” Treatment may include antimicrobial drugs to combat secondary bacterial infections, eye ointments containing antibiotics, nasal decongestant drops and other available medications.

Periodic Vaccinations. Due to the ubiquitous nature of FHV and the troublesome and perhaps lethal consequences of infection with it, the American Association of Feline Practitioners (AAFP) lists the vaccine that protects against this virus as among the four “core vaccines” for cats – those that should be given routinely to all cats. (The other three are those that protect against feline panleukopenia virus, calicivirus and rabies.)

The AAFP recommends that all kittens be initially vaccinated for FHV at six to eight weeks of age and that they receive booster inoculations every three to four weeks after that until they are at least 16 weeks old. Another vaccination should be administered one year following the initial vaccination, and every three years thereafter.