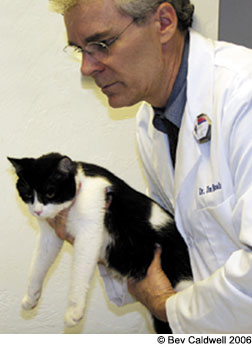 Situated in the forward area of the abdominal cavity and extending back to the rear of the rib cage, your cats liver is by far the largest gland and almost the largest organ in its body (exceeded in size only by the lungs and skin). And because of the many important tasks that it performs, a healthy liver is an indispensable component of the feline anatomy.

To say that the liver performs hundreds of different vital functions is probably underestimating it, says Deb Zoran, DVM, an associate professor of medicine at Texas A&M Universitys College of Veterinary Medicine and Biological Sciences. The liver is the centerpiece for just about everything. From putting food to work as an energy source to any number of other life-sustaining processes, it plays a key role.

Complex Structure
In close proximity to the stomach, spleen, pancreas, gall bladder and intestines, the liver is a thick, heavy, reddish-brown organ, its spongy tissue densely packed with vessels that receive blood through two major conduits. The main source of the organs energy is in the blood that flows to it from the heart via the hepatic (from the Greek word for liver) artery. It also receives blood from the spleen and gastrointestinal tract through the portal vein and returns it to the heart through a large vessel – the vena cava – for recirculation throughout the body.

The organ is divided into several sections (lobes), each of which contains thousands of tiny units called lobules, and every section of the liver is able to carry out all of the organs seemingly countless chores.

Important Tasks
The many life-supporting functions of the liver include helping in the metabolism (processing) of food absorbed from the small intestine, supplying energy by storing and releasing a carbohydrate called glycogen; metabolizing proteins, fats, carbohydrates, hormones and drugs; synthesizing certain fats and proteins; regulating body temperature; storing vitamins; manufacturing bile (a fluid needed for absorbing fats and facilitating digestion); reducing the potentially poisonous properties of various chemical substances; and manufacturing certain hormones. Dr. Zoran adds to this long but by no means exhaustive list the livers role in producing all of the blood-clotting proteins in a cats body.

Despite this organs size, apparent sturdiness and obvious potency, however, the liver is by no means invulnerable. Indeed, because of its closeness to other digestive organs and its involvement in innumerable processes, the liver is subject to several disorders, all of which must be considered dangerous or potentially lethal and requiring prompt diagnosis and treatment. Veterinarians at a busy clinic are apt to see cats with signs of liver disease every day.

Hepatic lipidosis (sometimes referred to as fatty liver disease) is a mysterious disorder that can affect cats of any age or breed. It occurs when a cat suddenly stops eating, whether for medical or other reasons.  In many cases, the dramatic pattern of food avoidance is secondary to another condition, such as dental disease, diabetes, cancer, hyperthyroidism, pancreatitis, inflammatory bowel disease or kidney disease.

In any case, the avoidance of food and resulting decline in caloric intake triggers the mobilization of fat that is stored throughout the body, which travels to the liver to be metabolized into an energy source. But the feline liver quickly exhausts its ability to process all of the incoming fat. As a result, explains Dr. Zoran, the accumulating fat begins to crowd out the normal liver cells, and this leads to liver failure. The onset and progression of hepatic lipidosis to a life-threatening stage can occur within only a few days, especially in obese cats, which are at greatest risk for the disease.

Cholangiohepatitis is a condition marked by inflammation of both the liver and the biliary system. This system comprises the gall bladder (a small, balloon-like sac) and the biliary ducts, which are located within the liver. In a normal animal, the liver secretes a potent liquid called bile that aids in the digestive process. This liquid then passes through the livers biliary ducts to the gall bladder, where it is stored until needed for digestion.

In cholangiohepatitis, Dr. Zoran explains, the inflammation can result from a bacterial infection or it can be secondary to an inflammation in a nearby part of the body, such as the pancreas or small intestine. In either case, the inflammation and accompanying swelling interfere with the function of the liver cells and biliary tract, resulting in bile stasis. Because bile is a digestive fluid, it can cause significant tissue damage when its flow is impeded or stopped by swelling of the ducts.

The typical signs of this disease include loss of appetite, fever, vomiting, and jaundice (a yellowish discoloration of the whites of the eyes and the mucous membranes). Unless the disease is treated promptly, the prognosis for cholangiohepatitis is poor.

Other Disorders
Less common compared to hepatic lipidosis and cholangiohepatitis, but of potentially serious consequence if they do occur, are the following four liver disorders:

Liver cancer.  Life-threatening cancerous tumors sometimes occur in cats, says Dr. Zoran, especially in middle-aged and older animals. What we see most are not liver cell carcinomas but lymphomas that originate in the lymphatic cells present in the liver or that arrive there from lymph nodes.  The condition may be treated with chemotherapy, but the prognosis for this disease is poor.

Hepatic necrosis. This condition, in which liver cells die, is usually related to massive infection with bacteria, says Dr. Zoran, but may also be caused by oxygen depletion resulting from anemia, shock or congestive heart failure. The disorder is often successfully reversed through treatment with antibiotics, fluid therapy, vitamins and other supportive therapy. Nutritional support is also important to prevent hepatic lipidosis.

Bile duct obstruction. This is pretty uncommon in cats, says Dr. Zoran, but it can be a bad thing if it does occur. It will happen if there is a gall stone or a tumor in a bile duct that obstructs the bile flow or if there is severe pancreatitis and everything just backs up. In most cases, this condition requires surgical intervention to remove the obstruction and allow bile to flow properly.

Portosystemic shunts. Lethargy, mental dullness, poor growth rate and lack of appetite are among the signs of this condition, in which a congenital vascular deformity prevents blood traveling in the portal vein from the intestines to the liver from reaching its destination, due to the presence of abnormal vessels that divert the blood flow. Surgery to correct the defective blood vessels is the standard therapy, but it is not always successful. This condition, while very common in dogs, is relatively infrequently observed in felines, says Dr. Zoran. We do see it from time to time, but its not the first thing we think of when were trying to diagnose liver disease in a cat.

Crisis Intervention
Treatment for the two most common forms of feline liver disease differ substantially. For hepatic lipidosis, says Dr. Zoran, an affected cat must start eating immediately. The condition is caused by the fact that theyre not taking in protein, she points out, so they will not get well until the metabolic defect is corrected. A cat cannot be force-fed, she notes, so the therapeutic feeding will typically be done with a feeding tube that is placed either into the cats esophagus or directly into its stomach.

Once the tube is in place, she explains, the animal can go home, and its owner can do the feeding. Many cats will come out of the crisis in two to three weeks. For others, the tube feeding will have to go on for four or six weeks before the liver heals and the animals metabolism returns to normal.

Treatment for cholangiohepatitis will depend on whether the cause is determined – by means of a tissue biopsy – to be bacterial, in which case the animal will be treated with antibiotics, or inflammatory, which will require steroid therapy.