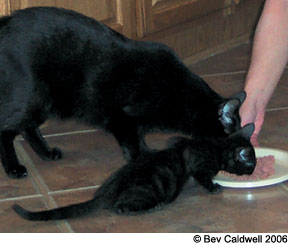 Something seems terribly wrong with your sweet old cat, Blossom. During all of the nine-plus years shes spent in your home, shes never before had a health problem. Youve always made sure that she got her twice yearly veterinary checkup and required vaccinations. Her appetite is fine, and judging by her behavior at mealtime, she adores the food you give her each morning and evening. She has rarely set a paw outdoors, so her exposure to diseases that might be carried by other cats in the neighborhood has been virtually nonexistent.

But for the past month or so, Blossom has been experiencing repeated bouts of severe vomiting and diarrhea. And she appears to be losing a bit of weight. What in the world could be happening to her?

Its quite possible that the poor animal is suffering from inflammatory bowel disease (IBD), a perilous intestinal disorder that, according to Albert Jergens, DVM, an internal medicine specialist and associate professor of clinical sciences at Iowa State Universitys College of Veterinary Medicine, is common among middle-aged and older cats.

At Iowa States Veterinary Teaching Hospital, he says, It is probably the most frequently seen source of gastrointestinal distress in cats. Were likely to diagnose, on average, one case of IBD per week.

Unknown Causes
The condition, which is mainly characterized by chronic vomiting and diarrhea, is widely thought to be the consequence of several different types of disorders involving the feline immune system. Microscopic analysis reveals that changes are consistently found in the lining (mucosa) of an affected cats intestines – a superabundance of immune system cells, for example – which suggests that abnormal immune system activity may precipitate the condition. Overall, however, inflammatory bowel disease remains something of a mystery to veterinarians.

We often see intestinal inflammation caused by parasites or other infectious agents, Dr. Jergens notes. But in cases of IBD, we have been unable to identify precisely what triggers the signs. Emerging data indicate that the condition is probably due to an animals immune system response to the normal bacterial flora that are present in the gut.  When this host response is mounted over time, he explains, it eventually damages the mucosa.

Another possibility, says Dr. Jergens, is that certain dietary substances may act as antigens that stimulate aberrant host immune responses. The rationale for that, he points out, is that animals with IBD typically respond to treatment involving dietary manipulation in addition to medicinal therapy.

But the bottom line, he says, is that feline IBD can only be described, at least for now, as persistent gastrointestinal inflammation of unknown cause that is unrelated to other inflammatory processes. While IBD is currently the object of widespread veterinary research, Dr. Jergens notes that interest in it is relatively new. The first large report on it came out only about a decade ago, he notes.

Prevalence Patterns
Although IBD is most frequently diagnosed in older cats, advanced age in itself has not yet been conclusively identified as a risk factor for the condition, according to Dr. Jergens. The epidemiology of the disease – its patterns of incidence and prevalence – have not been well identified, he notes.

At the same time, he points out, The disorder seems to be distributed about equally between males and females – theres no particular bias there. Unsubstantiated data would suggest that southeast Asian breeds, such as Siamese and Persian cats, are predisposed, but in my opinion it occurs just as often in other breeds as well as in domestic longhaired and shorthaired cats.

Indoor cats are diagnosed with IBD much more often than are outdoor cats. But he attributes this to a tendency among owners of indoor cats to be more attentive to the health of their animals and to seek veterinary care than are owners of those animals, such as barn cats, that spend most of their lives out on their own.

Vulnerability to IBD may be passed from one generation to the next, says Dr. Jergens, although any increased genetic susceptibility – the gene markers – have not been identified.

High Morbidity
Though chronic vomiting and diarrhea are the most common clinical signs of IBD, other indications that a cat is afflicted with the condition can include a decline in appetite, weight loss, frequent passing of gas, audible rumbling in the animals gut, observable difficulty in defecating and blood or mucus in the stool.

The signs tend to vary depending on which part of the gastrointestinal tract is affected. (Vomiting, for example, is more apt to occur when both the stomach and small intestine are involved, while diarrhea is more common when the inflammation is primarily in the intestine alone.) It depends on where the lesions are located, says Dr. Jergens. IBD can affect either the upper tract or lower tract, sometimes both. In general, we tend to see more cats with upper intestinal involvement.

IBD is a serious disease, he says, in which morbidity (the incidence of illness) is pretty high but mortality (rate of death) is relatively low. In severe instances, he notes, an affected cat may have to be euthanized due to uncontrollable and continual vomiting, diarrhea and malnourishment.

Prompt veterinary diagnosis is extremely important, says Dr. Jergens, because the clinical signs of IBD are similar to those associated with a wide variety of other diseases, such as cancer of the intestinal tract. IBD can mimic a number of other conditions or, conversely, the signs of several other diseases can mimic those of IBD, he says. So a definitive diagnosis is in the best interest of the patient as well as its owner.

Diagnosing IBD
To exclude other causes of an affected animals clinical signs, a veterinarian may perform such diagnostic tests as a complete blood cell count and chemistry panel, fecal examination and tests to rule out the presence of cancer and infections with bacteria and such viral microorganisms as the feline immunodeficiency virus (FIV) and feline leukemia virus (FeLV).

Given that other diseases can be excluded, Dr. Jergens will then turn his attention to the animals eating habits by placing it on an elimination diet for several weeks to see whether it might be harboring an allergy to or intolerance of an ingredient in the food that it habitually consumes. (In an elimination diet, the animal eats nothing but novel proteins that its system can process without adverse reactions – a regimen known as a hypoallergenic diet.)

If no food allergy or intolerance is identified, the patient will then undergo a procedure that is indispensable to a definitive IBD diagnosis – a microscopic evaluation (biopsy) of small pieces of gastrointestinal tract tissue that are obtained from an animal either surgically or by means of an endoscope, a flexible tube that is passed into the tract. (For both biopsy procedures – surgery and endoscopy – the patient must be placed under general anesthesia.) The gold standard for definitive diagnosis is a microscopic review of a biopsy sample, says Dr. Jergens. If youve excluded other causes of the clinical signs and if the tissue examination reveals the lesions that are typical of intestinal inflammation, then you can be quite confident that the patient has IBD.

Diet and Drugs
Treatment for a confirmed case of IBD, he says, is with diet and drugs. An affected cat will be placed indefinitely on whatever diet is best tolerated, and drug treatment will involve mainly glucocorticoids – hormones that possess anti-inflammatory properties – and other substances that suppress what Dr. Jergens refers to as an aberrant immune system response.

Although IBD is not curable, he says, the chances that a cat will respond well to the diet-drug therapy are very good. Probably 90 percent of the patients will respond favorably, he estimates. The idea is to gradually taper them off of the medication and try to maintain them on the diet alone.

Unfortunately, he adds, Most of these cats will probably relapse at some point in time. Theyll have recurring episodes of vomiting and diarrhea, and this will require additional medical therapy.

Since IBDs inciting event – or events – are unknown, says Dr. Jergens, there is nothing an owner can do to prevent a cat from acquiring the disease. Just be sure to take your animal in for its routine health exams, he advises owners, and be sure to seek professional assistance right away if the signs start to appear.