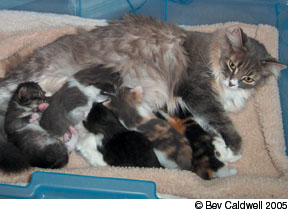 Vomiting, severe diarrhea, diminished appetite, fever, lethargy, progressive weight loss, weakness, nervous system damage: These are among the signs of a disease called panleukopenia – also known as feline distemper – an illness of cats, most frequently of kittens, for which there is no specific antiviral medication.

Due to panleukopenias deadly potential, especially for kittens, the American Association of Feline Practitioners regards the FPV vaccine as a core vaccine – one that all kittens should be given.

A Complex Molecule
Viruses may be defined either as extremely simple micorganisms or as extremely complex molecules, says Colin Parrish, PhD, a professor of virology at the Baker Institute for Animal Health, a unit of Cornell Universitys College of Veterinary Medicine. No matter which way you define them, however, there is no doubt that they are the causative agents of many infectious diseases.

Viruses are not living, he explains, but they have a need to replicate. Every viral particle consists of a protein coat that surrounds a core made up of genetic material – the DNA or RNA blueprint that allows the virus to reproduce itself once it finds a host cell. Its ultimate goal is to make as many copies of itself as possible, as quickly as possible. In this process of replication, some virus types can crowd so many particles within a host cell that the cell bursts and distributes viral particles throughout its surroundings. In this manner, the virus infects more cells and spreads throughout the hosts body – a process that may eventually result in disease.

A parvovirus, Dr. Parrish explains, is a very small but very durable virus that can survive outside a host much longer than larger viruses can. There are a lot of parvoviruses, he notes, but there is only one that we know of that affects cats – and thats FPV, the one that causes feline panleukopenia.

In addition to its comparatively small size, this parvovirus has the distinctive characteristic of primarily infecting kittens. Probably more than 90 percent of cats diagnosed with panleukopenia are kittens, mostly between two and four months of age. In fact, its an uncommon disease in older cats.

The main reason for this is that the parvovirus only replicates in cells, mostly in the small intestine, that are rapidly dividing, and these cells stop dividing as quickly when an animal gets older.

FPV does additional damage by attacking and destroying white blood cells. The term panleukopenia, derived from several Greek words, essentially means a general lack of white blood cells. Panleukopenia therefore can manifest itself in the gastrointestinal tract, where it attacks the cells that line the intestines; in the circulatory and lymphatic systems, where the destruction of white cells can seriously impair the immune system; or – in feline fetuses or newborn kittens – the nervous system, where the disease affects the brain cells in the cerebellum.

Early Signs
FPV is very prevalent in the environment, Dr. Parrish points out, but especially in such places as animal shelters and breeding facilities, where a lot of kittens may be exposed to a lot of virus. Parvovirus is primarily spread from one cat to another through the inhalation or swallowing of the virus, which is shed in massive quantities in the stool of infected cats.

The initial signs of infection vary. A kitten may simply be a bit off-color, he says. It may just have malaise, and maybe a little bit of diarrhea. Typically, a kitten may show very little disease whatsoever and soon recover uneventfully, thanks either to its innate immune system – the one it was born with – or to its adaptive immune system, which recognizes a virus or bacterium and produces the appropriate immune response.

But in five percent to 10 percent of infected animals, the disease and the clinical signs will develop very rapidly, and it can be fatal within three or four days.

Within a week or so of being infected, a seriously diseased cat will begin to experience frequent vomiting and diarrhea, decreased appetite and weight loss, and a high fever. And its eyes may acquire a yellowish color, the result of developing liver disease.

Also of note: If a pregnant queen is infected with FPV, the brains of her kittens may be affected in utero, particularly the part of their brains that controls balance. Thus, at about two weeks of age – when they first become mobile – such kittens will have a wobbly gait and their heads will bob up and down.

Sadly, many kittens that develop FPV can die as the result of the infection and its effects within a day or two. However, a kitten that survives for 48 hours after the emergence of the clinical signs has a fairly good chance of full recovery. And if it survives for five to seven days, it will probably recover speedily, given that it receives proper veterinary attention.

Supportive Care
To diagnose suspected panleukopenia, a veterinarian will review a cats medical history and vaccination status, do a complete blood count and blood chemistry panel, order a fecal examination, and possibly have laboratory tests done to exclude other serious viral diseases, such as infections by feline leukemia and feline immunodeficiency viruses, and to confirm the presence of FPV.

Since there is no specific treatment for a panleukopenia infection, treatment will be basically supportive, says Dr. Parrish. In theory, he notes, you might be able to target the virus with antibody, but in practice its not feasible to do that. About all you can do is keep the animal warm and hydrated.

In addition to delivering fluid intravenously into the animals system and providing it with nutritional support, care must be taken to protect it from secondary bacterial infections, which is accomplished with injectable antibiotics. Drugs to control vomiting may be advisable, and in some cases transfusions may be required to combat fluid loss and provide antibodies.

For a cat that survives the ordeal, subsequent home care will entail feeding it a bland diet at first and reintroducing its normal diet gradually. Once a cat has survived the disease, it will be immune for life.

Preventive Measures
In their earliest weeks of life, says Dr. Parrish, kittens are protected against FPV infection and panleukopenia because of antibodies that have been passed along to them through their mothers milk.

Those antibodies gradually disappear, however, so when a kitten reaches the age of six or eight weeks, the owners should be sure to have them vaccinated against FPV according to a schedule that will entail periodic revaccinations.

In urging people to safeguard the health of their feline companions, Dr. Parrish notes: Most current protocols call for revaccination every three years, which is adequate to protect an animal from getting this disease.

Owners are also advised that good hygiene practices can help to limit the spread of FPV. This can be achieved by using a bleach solution (one ounce of household bleach in one quart of water) to deactivate the virus on surfaces that may have been somehow contaminated by the virus. Such precautions are usually not necessary in households with healthy, vaccinated, adult cats. But they can be lifesaving in multiple-cat environments housing kittens.