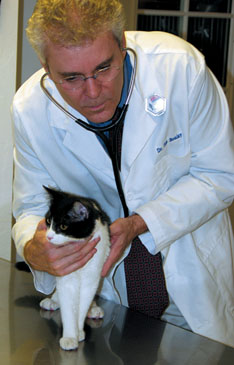 Despite some minor anatomical differences, feline lungs are structured just like human lungs, operate in the same way, and serve the same purpose. As in humans, these two bag-shaped, elastic organs are located opposite each other –  one on each side of the animals heart – and occupy most of the space in its chest cavity.

Like any mammalian lungs, says Richard Goldstein, DVM, feline lungs have two main functions – ventilation and perfusion – both of which are essential to a cats vital processes. Any anatomical differences between a cats lungs and your lungs are not significant, says Dr. Goldstein, an assistant professor of clinical sciences at Cornell Universitys College of Veterinary Medicine. Problems with these life-sustaining organs are very, very common, he observes, noting that a busy veterinary emergency clinic may see one or more cases of pulmonary distress or disease every day.

What Are Ventilation and Perfusion?
Ventilation, he explains, is the act of breathing –  the rhythmic inhalation and exhalation of air from the environment. This steady, involuntary activity is effected primarily by the muscular activity of the diaphragm, a membrane separating the animals chest area and its abdominal cavity.

Perfusion is the process by which the lung removes life-supporting oxygen from the inhaled air and delivers it into the cats circulating blood.  In this process, the oxygen is exchanged for carbon dioxide, which is produced in the animals cells. The carbon dioxide is then released via exhaled air. This purification occurs in microscopic, sack-like tissue structures called alveolae, which are packed with tiny blood vessels (capillaries) that facilitate the efficient passage of gases into and out of the blood stream. As long as ventilation and perfusion are happening, says Dr. Goldstein, the blood will contain an appropriate level of oxygen.

Acute and Chronic
Unfortunately – and in some cases tragically – a wide variety of disease conditions, either chronic or acute, can interfere with proper ventilation and perfusion. The most common causes of these respiratory conditions include allergies, parasitic infections, benign or cancerous growths, pus-filled abscesses, adverse reactions to inhaled fungi, and the malfunction of other vital organs, especially the heart.

Signs of an acute respiratory illness include labored breathing, periodic blackouts or fainting; pale or bluish lips, gums and nose tissue; irregular heartbeat; and gastrointestinal upset. A severe acute attack is likely to result in a cats death if veterinary treatment is not immediately available. The signs of a chronic lung disease are similar, but their manifestations are less dramatic. In a long-lasting condition, the signs are likely to worsen and become perceptible to an owner over an extended period – years, perhaps – and tend to be marked by multiple attacks, progressive loss of appetite, lethargy, and weight loss before eventually causing an animals death.

Ominous Signs
A chronic lung disease may often be identified during the course of a routine veterinary examination, says Dr. Goldstein. In some cases, therapy for a chronic condition can be initiated and, if maintained indefinitely, can extend a cats life for several years. The prognosis for acute conditions that suddenly prompt severe and unexpected respiratory distress is much poorer.

According to Dr. Goldstein, this has to do with the ancestry of cats – the ploys that they have developed over thousands of years to conceal any vulnerabilities to would-be attackers in the wild. As a result, he points out, cats have become very, very good at hiding any signs of respiratory distress. They can handle severely reduced functionality in the lungs and still seem normal. Maybe an owner will notice that the cat is breathing a bit more rapidly or is moving with a little bit of increased effort – but then something will happen that will push the animal over into real respiratory distress. At this point, emergency care is usually needed to save a stricken animals life.

Common Lung Conditions
Several common disorders that are characterized by compromised lung function and are, in fact, considered to be lung diseases do not originate in the lungs themselves. Asthma and bronchitis, for example, are viewed as obstructive lung diseases, although they are precipitated not in the lungs but in the larger and smaller airways – the bronchi and bronchioles – that lead from the windpipe (trachea) to the lungs. In these conditions, the flow of air to the lungs is obstructed by muscle spasms, mucus, and sloughed-off cellular matter in the breathing tubes. These obstructions are caused by an over-reaction of the tissue lining the bronchi to any of several stimuli, such as bacteria and viruses; parasitic worms; or inhaled dust, smoke, mold or pollen.

Another comparatively common lung condition, pleural effusion, occurs not within the lung but in the space between the outer surface of the lungs and the inner surface of the chest cavity, both lined by a thin tissue called the pleura. A wide variety of causes – including heart failure, kidney disease, infection, cancer and traumatic injury to the airways – result in the buildup of fluid within the pleural cavity, the pressure of which compresses the lungs and inhibits their expanding and contracting. This, in turn, causes shortness of breath, chest pains, fever, and several other serious problems.

pyothorax, a bacterial infection of the chest;

feline infectious peritonitis (FIP), the result of a specific viral infection that may cause fluid to build up within the abdominal and/or chest cavities;

chylothorax, an accumulation of a fatty fluid (chyle) in the chest;

lymphoma, a cancer of the lymphoid tissue; and

hypertrophic cardiomyopathy, a heart condition resulting in the excessive accumulation of fluid in body tissues and cavities.

Also common are lung diseases associated with infection by feline immunodeficiency virus (FIV) and those caused by such parasites as heartworms and lungworms, although the prevalence of those parasitic infections depends to a great extent on geographical, climatic and seasonal factors. Likewise, a lung disease called histoplasmosis is seen in certain rural areas of the U.S. This condition is caused by inhalation of a fungus especially prevalent in soil on which chickens are raised.

Diagnosis and Treatment
When a cat that is experiencing respiratory distress is brought to a clinic, the veterinary personnel on hand will, of course, attempt to discern which of the various lung ailments is responsible – but not before treating the animals potentially deadly breathing difficulty. Says Dr. Goldstein: By the time a cat is in an emergency situation, we have to treat first and diagnose later because it is very, very fragile. Stress is the last thing that you want to cause in an animal with significant respiratory disease. So after a brief cursory exam, we will put the cat on oxygen and give medications or sedatives as needed. Sometimes, we will not touch it at all – well let it calm down a little bit.

When the cats respiratory crisis appears to have passed, it will usually be treated presumptively, says Dr. Goldstein, for one of the two most common lung conditions. The animal will receive steroids if asthma seems to be the problem. Or if pleural effusion is suspected, fluid will be drained from its chest. Only after the cat has stabilized will an exclusionary diagnosis – utilizing X-rays, blood tests, and a fecal examination – be undertaken to definitively identify the source of the respiratory distress, following which an appropriate treatment plan will be established.