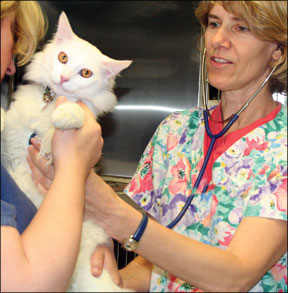 Like their human counterparts, feline lungs are bag-shaped, elastic organs, two in number, located on either side of the heart and occupying most of the space in the chest cavity. They are virtually identical in structure to human lungs as well, functioning in the same manner and fulfilling the same fundamental purposes – removing carbon dioxide from the bloodstream and keeping the blood constantly supplied with life-sustaining oxygen. The lungs perform their vital functions by means of two processes –ventilation and perfusion – explains Richard Goldstein, DVM, an

Ventilation, Dr. Goldstein notes, is the act of breathing – the rhythmic inhalation and exhalation of air from the environment. This steady, involuntary process is driven primarily by the muscular activity of the diaphragm – a membrane separating the animals chest area and its abdominal cavity – and by muscles between the ribs that control movement of the chest.

Perfusion is the process by which the lungs remove oxygen from inhaled air and deliver it into the cats circulating blood. In this process, the oxygen is exchanged for carbon dioxide, which is waste produced in the animals cells. The carbon dioxide is then released via exhaled air. This purification occurs in microscopic, sac-like tissue structures called alveolae, which are packed with tiny blood vessels (capillaries) that facilitate the efficient passage of gases into and out of the bloodstream.

“As long as ventilation and perfusion are happening,” says Dr. Goldstein, “the blood will be appropriately oxygenated.” Unfortunately, problems with the lungs are very common, he observes, noting that “a busy veterinary emergency clinic may see one or more cases of pulmonary distress or disease every day.” The most frequently diagnosed causes of these respiratory conditions in cats include asthma, allergies, parasitic infections, benign or cancerous growths, fluid accumulation in the chest, infection and the malfunction of other vital organs, especially the heart.

Signs of acute respiratory illness, which can be difficult to recognize, most often include labored breathing (sometimes open-mouthed), a bluish color to the gums and roof of the mouth and decline in appetite. A severe, acute attack may result in death if veterinary treatment is not given immediately. The signs of a chronic lung disease are similar, but their manifestations are less dramatic. In a long-lasting condition, the clinical signs are likely to worsen and become perceptible to an owner over an extended period – years, perhaps. Such conditions tend to be marked by multiple attacks, progressive loss of appetite, lethargy and weight loss before eventually causing an animals death.

A chronic lung disease can often be identified during the course of a routine veterinary examination, says Dr. Goldstein. In some cases, therapy for a chronic condition, if maintained consistently, can extend a cats life for several years. The prognosis for acute conditions that suddenly prompt severe and unexpected respiratory distress may not be as good, especially if veterinary help is not readily available.

A number of serious disorders that are characterized by compromised lung function do not originate in the lungs themselves. Asthma and bronchitis, for example, are viewed as obstructive lung diseases, although they are precipitated not in the lungs but in the airways – the bronchi and bronchioles – that lead from the windpipe (trachea) to the lungs. In these conditions, the flow of air is obstructed by muscle spasms, mucus and sloughed-off cellular matter in the breathing tubes. These obstructions are caused by an overreaction of the tissue lining the bronchi to any of several stimuli, such as bacteria and viruses, parasitic worms or inhaled dust, smoke, mold or pollen.

Another comparatively common feline lung condition, pleural effusion, occurs not within the lungs but in the space between two layers of thin tissue – the pleura – that line their outside surface. A wide variety of causes – including heart failure, kidney disease, infection, cancer and traumatic injury to the airways – can result in a buildup of fluid within the pleural cavity, the pressure of which inhibits the lungs from expanding and contracting with ease. This, in turn, causes shortness of breath, chest pains, fever and other serious signs.

Also common are lung diseases associated with infection with feline immunodeficiency virus (FIV) and such parasites as heartworms and lungworms, although the prevalence of those parasitic infections depends to a great extent on geographic, climatic and seasonal factors. Likewise, a lung disease called histoplasmosis is frequently seen in certain rural areas of the U.S. This condition is caused by inhalation of a fungus especially prevalent in soil on which chickens are raised.

When a cat that is experiencing respiratory distress is brought to a clinic, the veterinary personnel on hand will, of course, attempt to discern which of the various lung ailments is responsible – but not before treating the animals potentially deadly distress.

Says Dr. Goldstein: “By the time a cat is in an emergency situation, we have to treat first and diagnose later because it is very, very fragile. Stress is the last thing that you want to cause in an animal with significant respiratory disease. The worst thing you can do is to take a chest X-ray right away – you run the risk of killing the animal just by restraining it on a table. So instead, after a brief, cursory exam, we will put the cat on oxygen and give medications or sedatives as needed. Sometimes, we will not touch it at all – well let it calm down a little bit.”

When the cats respiratory crisis appears to have passed, it will usually be treated “presumptively,” says Dr. Goldstein, for one of the two most common lung conditions. The animal will receive steroids if asthma seems to be the problem. Or if pleural effusion is suspected, fluid will be drained from its chest. Only after the cat has stabilized will an exclusionary diagnosis – utilizing X-rays, blood tests and a fecal examination – be undertaken to definitively identify the source of the respiratory distress. At that point, an appropriate treatment plan will be established.