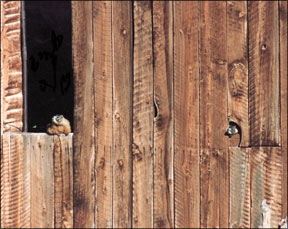 Each year, many thousands of cats are brought to veterinary clinics throughout the U.S. showing the telltale signs of respiratory distress: labored breathing, chest constriction, wheezing and

coughing. In the vast majority of cases, the animal will be diagnosed with asthma, a mechanical constriction of the airways, or bronchi, the narrow network of tubes that lead directly from the trachea to the lungs. The narrowing of the airways occurs when a cats immune system overreacts to the presence of an allergy-producing substance, such as cigarette smoke, dusty kitty litter or pollen and responds to the presence of the allergen by releasing stimulants that cause a swelling of the tissue (mucous membrane) lining the bronchi.

But while asthma is by far the most common cause of feline respiratory difficulty, veterinarians will often refrain from diagnosing it definitively until they have reviewed the results of a microscopic examination of the patients feces. Why? Because such a procedure could reveal the presence of lungworms in the animals respiratory tract – a situation that would produce asthmalike clinical signs but would require a significantly different approach to treatment.

Although feline lungworm infection can occur in most areas of the U.S., it is relatively uncommon in many regions, according to Richard Goldstein, DVM, an associate professor of small animal medicine at Cornell Universitys College of Veterinary Medicine. At the Cornell University Hospital for Animals, he says, “Well diagnose perhaps only a half-dozen or so cases of lungworm each year, and its not usually a life-threatening problem. But if the infection remains untreated, a cat can conceivably die of severe respiratory distress. Or the animal can be at increased risk for secondary infections and pneumonia. In any case, a cat that is harboring these worms is going to be very uncomfortable. It will be reluctant to run or play. It will have a hard time breathing and will constantly be coughing.”

For all of the trouble it can cause, the lungworm (

Aelurostrongylus abstrusus) is a tiny creature. Adult females are about one-third of an inch long; males are considerably smaller. A cat gets them into its system by eating their larvae, which exist naturally in the tissues of snails, slugs or small rodents that habitually ingest these intermediate hosts. Once inside the cat, the worms mature, migrate out of the gastrointestinal tract and take up residence in the animals lungs, where they grow to adulthood and proceed to lay eggs.

It is essentially the bodys immune response to the presence of the eggs that damages an animals lung tissue and causes respiratory distress as the larvae grow to adulthood. The worms dont return to the host animals digestive tract through its tissues. “What happens instead,” explains Dr. Goldstein, “is that the offspring of the worms that have matured in the respiratory tract are coughed up by the animal. The cat will then swallow the larvae and subsequently excrete them into the environment in its stool.”

“In some cases,” he notes, “the worms will eventually just die within the cats system, and the cat will get better. But that could take a very long time.” In most instances, an infected cat will begin to shed larvae in its feces about a month or six weeks after eating a larvae-carrying snail or rodent.

The problems that lungworms cause are different from those caused by other types of worms. Roundworms, for example, are large and, if abundant enough, can cause a life-threatening blockage in the gastrointestinal tract. On the other hand, says Dr. Goldstein, “Lungworms dont mechanically obstruct the airways. The swelling and inflammation within the airways result from the immune systems release of histamine and other noxious substances. This is also the case with asthma.”

This immune system reaction can make diagnosis a challenge. Says Dr. Goldstein: “The problem is that lungworm infection can look very, very similar to asthma or bronchitis, which are more common by far. As a result, an owner – and even a veterinarian – may overlook the possibility of lungworm infection and assume that the cat has one of these more common respiratory diseases.” If asthma is diagnosed, he points out, steroid medications are likely to be prescribed. But these medications will not provide an effective cure for lungworm infection. “Steroids are the mainstay therapy for asthma,” he notes, “because they suppress the immune system and the resulting inflammation. And they may indeed temporarily relieve the respiratory difficulties associated with lungworm infection as well. But the problems wont resolve completely.”

A cat with respiratory disease would typically have its chest X-rayed, says Dr. Goldstein. “But you cant definitively diagnose asthma by looking at an X-ray image,” he explains. “And since you cant see worms on an X-ray, asthma and lungworm infection can look very similar. So we would routinely recommend that any cat with respiratory signs be given a fecal test in which the animals stool is examined for worm larvae. In some cases, you can also spot larvae in a sample taken from the airways themselves or from the lungs.”

In general, Dr. Goldstein says, lungworm infection is easily treated with a variety of drugs, including one called fenbendazole, which is among the most frequently prescribed by veterinarians. He points out, however, that treatment itself can cause problems. “Sometimes,” he says, “a cat can get a lot worse during treatment if theres a large burden of worms.

“The medication itself wont kill the cat, but the heavy load of

antigens that are shed from the dying worms can cause an acute and potentially fatal allergic reaction. So some infected cats may need to be hospitalized for a few days, monitored while they are being treated and given steroids to make sure that they get over that initial allergic response. Once they get through that, theyll be cured,” says Dr. Goldstein It is most important, he says, that owners not attempt to deworm their cats by themselves with medications obtained on the Internet.

Lungworms, although far less prevalent than roundworms or hookworms, are present in the environment worldwide, Dr. Goldstein points out. Infection, he says, is relatively rare in animals that are kept indoors and is most frequently observed in cats that “spend most of their time roaming and hunting in the wild, especially in areas with streams, where snails live.” Regarding such outdoor animals, he says, prevention is “not really the answer.”

One effective approach to combating lungworm infection in any cat, he advises, is to have the animal routinely dewormed with pills by a veterinarian. “This can get rid of the worms at an early stage,” he says, “before the animal develops any serious signs of infection.” He recommends that outdoor cats be examined by a veterinarian and be dewormed every six months.

Most important, however, is for owners to recognize the signs of respiratory distress in general. “Get to know your cats breathing pattern,” he advises, “and if it changes in any noticeable way, see your veterinarian immediately. If your cat coughs frequently or breathes with its mouth open or if its breathing is shallow and rapid – these are the signs of respiratory distress and require prompt treatment.”