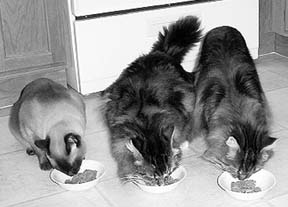 How are ya? people ask, as if they really want to know, and its tempting to answer: Well, this inflammatory bowel disease is killing me. It all started with frequent vomiting, which I tried to ignore, and then came weight loss and that awful diarrhea.

Perhaps thats why people dont inquire about cats feelings – although they should – and why we cats dont complain as much as we would – if we could. Or maybe the message is: What you dont want to think about can kill a feline friend.

But first, lets clear the record. No, the only four-legged, one-tailed furry doctor in the Cornell Feline Health Center is not dying from inflammatory bowel disease (otherwise known as IBD). In fact, Im doing pretty well, thank you, at three years post-diagnosis and counting.

This 13-year-old owes his continued pretty-good health (although Ill never admit it, because gratitude is not a cat thing) to the vigilance of my human officemate here at the center. If Dr. Jim Richards (the guy with the column on the back of this newsletter) said it once he has said it a thousand times: When a cat is vomiting more than once a week, theres something wrong. And no, hair in the vomit doesnt make it just a hairball. It is vomit, coincidentally with hair in it, and there could be a serious medical reason why your cat is throwing up.

Time for a Doctors Visit
Confidentially, I think it was the stinky diarrhea that got to him – seeing how my litter pan is near his desk and I dont have outdoor privileges where some cats yucky stuff goes undetected. But hes not nuts about cat vomit, either, and my sudden weight loss was a clue.

So off I went, moaning about the indignity of it all, to the clinic, where Richard Goldstein, DVM – a specialist in internal medicine at the Cornell University Hospital for Animals – picks up the rest of the story.

First you had some tests to rule out other conditions with similar signs – hyperthyroidism, diabetes or kidney disease, for example – but your blood and fecal tests were normal, Dr. Goldstein recalled of a time that was a blur to me.

That left a few main possibilities – primary food allergies, inflammatory bowel disease or intestinal lymphoma – and there were two ways we could have gone.

We could have put you on a trial therapy, to see if you had food allergies or maybe IBD, with a special diet and an antibiotic like metronidazol, says Dr. Goldstein. If you responded to the trial therapy, that probably would have meant it wasnt cancer. But suppose it was. We would have lost valuable time treating the most common kind of cancer you could have had – intestinal lymphoma, he says, calling that one of the most successfully treated cancers in cats these days. (A chemotherapy pill a day, at home by the owner, and the average cat with intestinal lymphoma can look forward to at least 17 months of good-quality life. Some are living and thriving for another four or five years, says Dr. Goldstein.)

Can He Pass the Test?
But nothing but the best for the colleges favorite mascot, Dr. Goldstein says, murdering my job title. You, you fortunate fellow, got a more definitive test – a biopsy with a fiber optic endoscope to take a little pinch of the mucosal lining of your small intestine.

Before the biopsies, they also did X-rays and ultrasound scans to look for thickening of the intestine – a sign of lymphoma or other types of cancer, so I was told. Or instead of the endoscope biopsy, they could have done a surgical biopsy, cutting me open to get a deeper sample of the small intestine where cancer might lurk. While exploring around, they could take biopsy samples of other organs, too, like the liver.

Whichever. Youre in dreamland with the anesthesia, but if you have a choice, you should go for the less-invasive endoscopy. That little pinch of my small intestine went to a pathologist who looked for, among other things, an invasion of immune cells in types or numbers that shouldnt be there.

The clincher, though, was my villi, which are not little streets in Italy. Each villus (and there are millions of them) is a tiny protrusion from the intestinal lining to increase the surface area and absorb stuff faster. Healthy villi are supposed to look, under the microscope, like little trees, Dr. Goldstein explains. But when villi are fused together like hills, the pathologist writes down inflammatory bowel disease. And my intestine had more hills than Rome.

We wanted to start treating you right away, Dr. Goldstein says, because severe IBD may lead, eventually, to intestinal lymphoma. You were getting antibiotics at first because some of those bad bugs in your gut, like Helicobacter, might have been irritating your intestine. Now youre just on prednisolone, for the inflammation, and a feline Z/D diet, and wed like to cut back on the prednisolone because that glucocorticoid can have long-term side effects.

As you can see, Dr. Mew has gained back his weight – and then some, my officemate says, and thanks, Doc, for that snide observation. Theres almost no more vomiting and his diarrhea – sniff, sniff – is gone, too.

The Causes Are … Unknown
Feeling the confidence of a disease survivor, I asked the next obvious question: What exactly causes inflammatory bowel disease? And guess what – these paragons of veterinary medicine havent a clue.

All right, sorry, they have some clues. The fact that special diets with so-called novel sources of protein (like duck, rabbit and venison) seem to help might point to food allergy as a cause – or at least a contributing factor – Dr. Goldstein says. He noted that my Z/D diet has extra-small molecules that the immune system cant recognize and over-react to.

It seems to be an antigen-driven response, but to what antigen – bacterial, parasites – we just dont know. Wed like to do more research right here in the Cornell Feline Health Center, he says, and Director Richards agrees.

And the outlook for my mysterious disease? The prognosis is generally good, but it requires aggressive initial treatment and long-term dietary therapy. Theres still a slight risk of IBD turning into intestinal lymphoma. But youre doing great, Dr. Goldstein concludes. Keep it up and this wont cut a day off your lifespan.
There, arent you glad you asked?