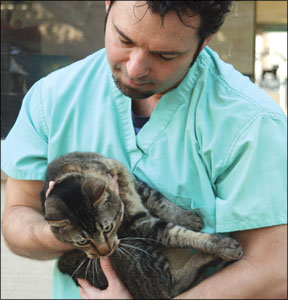 Although its only the size of a golf ball, your cats brain is just about as complex and, when it comes to matters of vital concern, just about as capable as your brain. Of course, a cat uses its brain and the other components of its neurologic system to address needs and desires that are often different from yours. After all, you like to read books and watch movies; your cat likes to torment

mice and play with balls of yarn.

Sad to say, a cats neurologic system also resembles yours in the wide variety of serious disorders with which it can be afflicted, sometimes with fatal consequences. According to Curtis Dewey, DVM, an associate professor of neurology and neurosurgery at the Cornell University College of Veterinary Medicine, he and his colleagues typically treat four or five neurologically compromised cats each week at the universitys animal hospital.

These processes are facilitated by the instantaneous delivery of electrical signals that are transmitted, via the peripheral nervous system, from tissues throughout a cats entire body to its spinal cord and brain. The brain responds by interpreting these signals and transmitting appropriate instructions back through the brain stem and spinal cord to the appropriate destination via the peripheral nerves.

Many functions of the nervous system are under conscious and voluntary control, such as the movement of an animals legs or the opening and closing of its mouth. Other functions are involuntary and regulated by the autonomic nervous system, such as those that control the activities of muscles in the digestive tract, lungs and heart, as well as the secretion of hormones.

The hub of all of this activity is the brain, which coordinates these activities. The brain consists of the cerebrum and cerebellum, which govern the array of nervous system activities; and the brain stem, which connects the brain to the spinal cord.

Among those disorders that do occur, some are significantly more common than others, notes Dr. Dewey. Perhaps the most frequently diagnosed of these is a neoplastic disease called meningioma, which is a type of tumor that develops in the thin protective tissue – the meninges – that covers a cats brain. Although these growths, which most often affect older cats, are usually benign and well-defined, their continued expansion will eventually result in damage caused by pressure on the brain. “Probably 75 percent of the brain tumors that we see are meningiomas,” says Dr. Dewey.

Fortunately, he notes, such tumors are notably amenable to surgical removal. “Cats that have a meningioma removed usually do very well,” Dr. Dewey says. “The surgery tends to be so successful that we dont have to follow up with additional therapy, and a lot of the patients will go on to live for several years.” The same cannot be said for another type of brain tumor called a glioma, which develops in a deeper and sometimes surgically inaccessible area of a cats brain.

Two other factors – trauma and advancing age – can play a substantial role in the sudden or gradual decline of feline neurologic well-being, says Dr. Dewey. “We often see cats that have been hit by cars,” he says. “Most of those that experience head trauma will die at the scene of the accident. But we sometimes see cats that almost escaped being hit but have had their tails run over. This can yank on the nerve roots, and in addition to having a dead tail, a cat that survives is likely to have urinary and fecal incontinence for the rest of its life.”

As for age-related neurologic problems, he says: “We dont see a lot of them, but its well documented that old cats can develop a progressive degenerative disorder that kills brain cells. Its similar to the problem experienced by elderly humans with Alzheimers disease.”