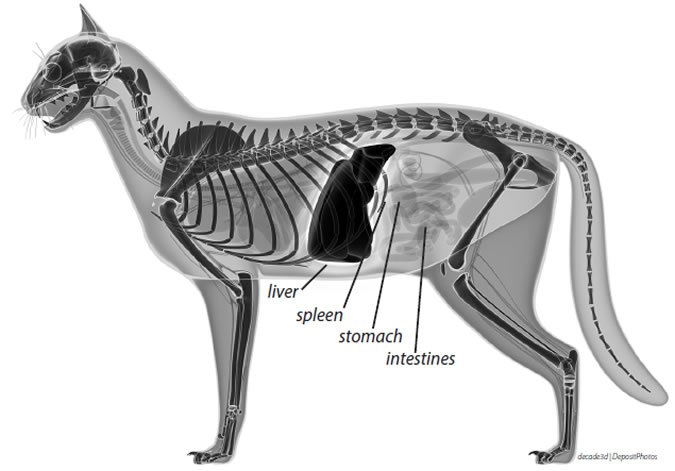 The liver is one of the busiest organs in your cat’s body and is a real multitasker. While it does have amazing regenerative powers, once 75 percent of the healthy tissue is gone, clinical signs of illness usually will start to appear. By then it can be too late for treatment to help beyond palliative measures, so be alert for early signs.

Many liver functions are tied to digestion, but this amazing organ also performs many other vital functions. Bile, which is stored in the gall bladder, is produced in the liver to help breakdown fats for digestion. Cholesterol and lipoproteins, which help transport fat to tissues where it is needed, are also produced by the liver. Glucose is turned into glycogen and stored in the liver for future use as needed. This glycogen can be converted back to glucose if needed to fuel many metabolic processes. Iron is also stored in the liver, along with blood as a backup to be released if there is blood loss.

Some proteins, such as albumin, are produced by the liver, along with proteins needed for blood clotting. In addition, some immune factors are produced here. Given its many vital functions, it makes sense that when the liver is injured beyond the point of healing, an affected cat may be in serious trouble.

When a cat develops a liver problem, the signs can be nonspecific, and the cause initially unclear. The cat may lose interest in eating but drool excessively and drink more than usual. There may be gastrointestinal signs, such as vomiting or diarrhea. With a buildup of the toxins that the liver normally helps to detoxify and filter out, neurologic signs may become evident. A big clue to the possibility of liver disease is the buildup of the yellow pigment called bilirubin (which is normally filtered from the blood by the liver) in the skin, the gums, the cornea of the eyes, and the inside of a cat’s ears. This syndrome can also occur with inappropriate break down of red blood cells.

Cholangiohepatitis means inflammation of the liver and the biliary system (which stores and delivers bile to the GI tract). This might be due to an infection with bacteria, or it could be an immune-related illness. Bacteria can get into the liver and gallbladder by traveling up bile ducts from the intestines. Luckily, this type of liver problem is often responsive to appropriate antibiotic therapy if caught early.

Immune inflammation is more common than bacterial infections. It’s treated with steroids or other immunosuppressive medications. Diagnosed early, this type of cholangiohepatitis may go into remission, but cat owners need to be prepared for possible long-term therapy.

A diagnosis of cholangiohepatitis will require standard blood chemistry workup, along with urinalysis and often bile acid studies (which also involve bloodwork). An ultrasound or radiographs may be suggested to further identify the extent of liver damage. A liver biopsy is often recommended so the cause of the hepatitis can be narrowed down. This may mean surgery to obtain the sample, or the biopsy might be done via ultrasound-guided needle biopsy.

The advantage of a surgical biopsy is that your veterinarian can be sure to take a section of damaged tissue for histopathological evaluation. A needle biopsy might miss abnormal tissue and give you a false negative result. Using ultrasound to guide the needle biopsy increases the chances of a useful sample. A biopsy can help to differentiate infectious versus immune cholangiohepatitis and aid in making a treatment plan for your cat. Biopsies must be done with care, as clotting mechanisms may be defective in patients with liver disease.

Hepatic lipidosis is a serious liver condition in cats. “For some unknown reason,” explains Sharon Center, DVM, professor of medicine at Cornell University College of Veterinary Medicine, “cats have a notable tendency to accumulate triglycerides (fats) in their hepatocytes (liver cells), and when these cells become filled with fat, the liver is unable to function properly. If not rescued promptly from the disease, affected cats don’t just end up with deformed livers—they die.”

The seriousness of this condition emphasizes how important it is to be sure your cat is eating daily, as hepatic lipidosis can be induced by a failure to take in appropriate amounts of food. This can be tricky in multi-cat households, especially if you free feed. It may help to routinely give a special treat to each cat daily to verify that all the individuals are eating.

Hepatic lipidosis usually occurs secondary to an initiating cause, which could range from obesity to diabetes to cancer. The key here is that the cat suddenly stops eating. In anorexic cats, fat moves from storage areas throughout the body to the liver. The liver gets overwhelmed and can’t keep up with metabolizing all the extra fat. In addition, the liver now can’t fulfill its other normal functions.

Diagnosis is similar to that of any feline liver problem, including all of the necessary bloodwork. In this case, radiographs and ultrasound may indicate an enlarged, fatty liver. Once again, a biopsy can help distinguish this problem from other liver conditions.

Treatment for hepatic lipidosis involves getting nutrition into your cat. Affected cats may not eat on their own and often avoid their food bowls and resist even their favorite treats. It may be necessary to hospitalize them initially and provide intravenous feedings, followed by the placement of a feeding tube directly into the stomach. Owners can be trained how to use and care for the feeding tube so that cats may receive much of their care at home. The feeding tube is often left in place for a month or more. Again, not surprisingly, prognosis is better if this problem is caught early.

Diagnosing liver problems in cats, and treating them, can be challenging. While the liver has remarkable regenerative powers, it does take time. Your cat’s best chance for a favorable outcome is an early diagnosis.

Cats can be born with liver defects that eventually lead to liver failure. Abyssinian and Siamese cats can have an inherited condition called hepatic amyloidosis. With this condition, abnormal proteins are deposited in the liver and interfere with normal liver functions. Unfortunately, there is no good treatment for amyloidosis, although it can be controlled for a period of time.