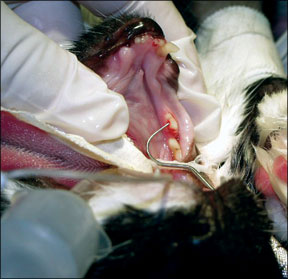 chances are that it is trying to cope with some sort of physical discomfort or nagging pain. And it is possible that the source of the poor cats angst lies somewhere within its oral cavity, the tunnel-like chamber leading from its lips to its throat.

According to Jennifer Rawlinson, DVM, a lecturer in veterinary dentistry at Cornell Universitys College of Veterinary Medicine, oral cavity disease of one sort or another has been identified as the feline health problem most often diagnosed in the course of routine physical checkups. This holds true for cats of all ages, she notes.

The components of the oral cavity include the lips, the hard and soft palates that make up the roof of the mouth, and the tongue. The oral cavity also contains, of course, the teeth, surrounded and supported by the periodontium, which includes the gums (gingiva), the periodontal ligament (a tough tissue that binds the root of the tooth to bone), and alveolar bone (the bone immediately next to the teeth). The periodontium is normally a sturdy structure that keeps the teeth anchored in the jawbone and protects them from the shock of chewing.

Cats are born toothless, but by the time a kitten is six months old or so, its baby teeth will have fallen out and been replaced by 30 permanent teeth 16 upper and 14 lower. Inside each tooth is a chamber (the root canal) that contains pulp tissue made up of blood vessels, lymphatic vessels and nerves. The pulp tissue in the root canal is surrounded by a bony tissue called dentin, which accounts for the bulk of a tooths structure and strength. And covering the crown of the tooth (its outer surface above the gumline) is a layer of enamel the hardest substance in the body which protects the dentin.

All of these tissues, hard and soft alike, are potentially subject to severe disease. A palate that has been penetrated by a stick, for example, or a tooth whose pulp has been exposed due to a fracture may provide an easy route of entry for disease-causing bacteria into a cats system. Chronic, festering ulcers caused by an allergy, perhaps, or the constant irritation of a rough-surfaced tongue may damage an animals lips and discourage it from eating normally. And some feline oral cavity diseases may be secondary to underlying systemic disorders, such as chronic kidney failure, diabetes or a malfunctioning immune system, which are frequently attributable to infection with such microorganisms as feline immunodeficiency virus (FIV) or feline leukemia virus (FeLV).

The feline oral cavity can also be affected by the development of benign and malignant tumors. “About 95 percent of these tumors will be squamous-cell carcinomas,” says Dr. Rawlinson, “which are abnormal, malignant growths of the cellular tissue on the surfaces of the mouth. The growths can originate in places other than the mouth, such as the salivary glands or the tonsils. They can also originate in the regions around the teeth or the underside of the tongue.”

Other than the appearance of a growth in the mouth, one of the clearest signs of squamous-cell carcinoma, she explains, is the inexplicably spontaneous loss of an intact tooth, particularly the upper fourth premolar. “Either it just suddenly becomes loose and drops out of the cats mouth,” says Dr. Rawlinson, “or it is easily removed by a veterinarian during the course of an examination.”

Unfortunately, she notes, by the time most oral squamous-cell carcinoma lesions are noticed, they are too large for surgical resection and the cancer has already spread to the animals regional lymph nodes. In such cases, the prognosis is extremely unfavorable and treatment options include only “some form of palliative radiation and/or chemotherapy.”

Dr. Rawlinson estimates that 80 percent or more of all cats will experience dental disease at some point in their lives, and three types of feline dental disease are notably common. In fact, these conditions plus squamous-cell carcinoma account for the vast majority of oral disease in cats. “I always tell my students,” says Dr. Rawlinson, “that if they know about these conditions, theyve got 85 to 90 percent of feline oral disease covered.” The three dental disorders, which almost always require treatment by a veterinarian, include:

Periodontal disease, which is the most common of all, affecting an estimated 85 percent of cats over the age of six. In this disease, layers of plaque accumulate and harden on the tooths surface. Bacterial poisons and enzymes from the plaque eventually prompt an inflammatory response in the gums that, if left untreated, leads to severe gum inflammation (gingivitis), destruction of the periodontal ligament and alveolar bone loss. In cats, advanced periodontal disease can quickly progress to an end-stage condition for which extraction is the only reasonable treatment option.

Feline odontoclastic resorptive lesions (FORL), another comparatively common dental affliction, affecting an estimated 25 percent to 50 percent of cats. This disease is characterized by slow erosion and destruction of the crown and/or root of the tooth and stimulated by an as-yet unidentified source. The cats body is unable to repair the damaged tooth, and the erosion will eventually lead to severe regional inflammation, pulp exposure, chronic pain and tooth fracture. Unfortunately, the only effective treatment available for teeth affected by FORL is extraction.

Feline gingivo-stomatitis syndrome (FGS), which occurs in about one in 100 cats. Although no single agent has been proven to be responsible for predisposing cats to this disease, those animals infected with FIV or FeLV are at elevated risk. In addition to infectious agents such as herpesvirus and calicivirus, a host of environmental, genetic and nutritional factors have also been associated with the condition. Although antibiotics and steroid therapy may be helpful in some cases, extraction of most or all teeth may be the best treatment option.

“Frequently,” says Dr. Rawlinson, “cats will present with periodontal disease along with resorptive lesions or stomatitis. Its most common to have more than one of these problems.” Regarding clinical signs, she says: “With any of these dental diseases and with squamous-cell carcinoma as well you can see behavioral changes. The cat will seem to be very hungry and run to its food dish but, upon attempting to eat, will then run away, vocalize or drop food from its mouth. A cat that used to like dry food will suddenly start to shy away from it.”

Some cats, she adds, may reveal their oral cavity disease by drooling excessively, pawing at their faces or shaking their heads.

To an extent, genetics seems to play a role in determining which cats are most susceptible to dental disease. Some studies, for example, suggest that Abyssinians, Siamese, Maine Coons, Persians and Somalis tend to be at elevated risk. It is also widely thought that a major cause of feline dental problems can be traced to the modern cats diet, which tends to stimulate a dangerous superabundance of plaque and tartar. The threat posed by any such risk factor, whatever it may be, is significantly compounded, according to Dr. Rawlinson, by the unwillingness or inability of owners to provide their cats with preventive dental care. Since plaque bacteria can colonize on a cats teeth within 24 hours, daily tooth brushing is an essential component of good oral hygiene.

Owners can receive instructions from a veterinarian on how to approach the intimidating task of brushing a cats teeth as well as on the type of brush and toothpaste that should be used. Or owners can access Cornells Feline Health Center (http://www.felinevideos.vet.cornell.edu/brushing_teeth/1.htm), where they can view an instructional video titled “Brushing Your Cats Teeth.”

Before instituting a brushing program, however, owners should have their cats undergo a thorough oral examination, since brushing the teeth of a cat with FORL or FGS would be very painful. “Brushing is best, but we also have to be realistic,” explains Dr. Rawlinson. “Not all cats allow routine brushing. Therefore, weekly mouth checks by owners and a twice-yearly oral exam by a veterinarian are highly recommended.”

Depending on the results of the oral examination, a veterinarian may suggest a dental prophylaxis, which will clean the oral cavity. With proper preventive action, she notes, owners can dramatically reduce the risk of feline periodontal disease.